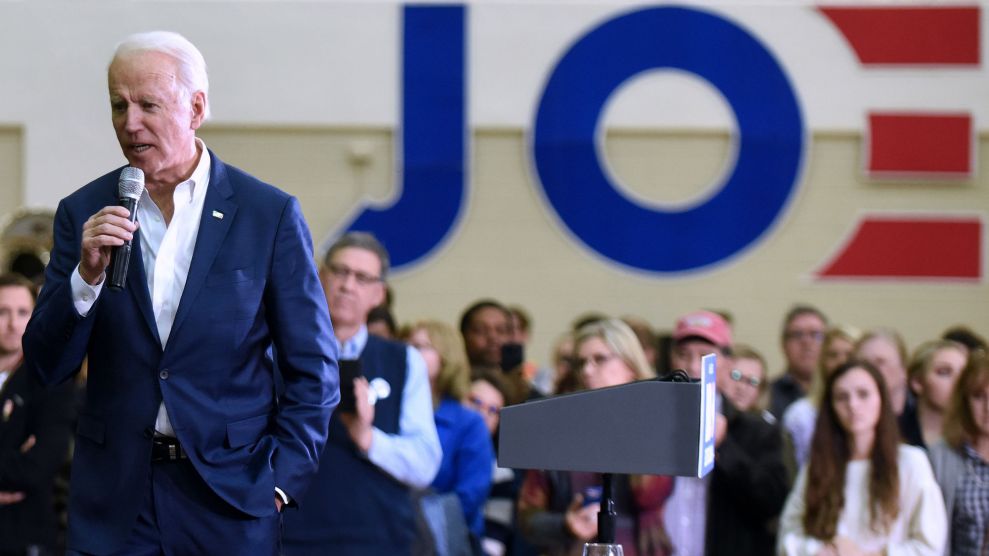 Joe Biden’s rally in Conway, South Carolina, on Monday evening started late and was already running long before the former vice president went ahead and took one last question from a young man in the crowd. It might have been a tricky one for a less experienced politician—if the campaign had been vetting questions, it would have been someone’s job to nix it—more of a statement than a query, rambling, and not closely tied to the campaign’s main themes. It started off about fears of what population growth would do to the planet and concluded by asking how Biden would empower women in poor countries “who are dealing with machismo?”

The final hours before Saturday’s primary could be the beginning of a comeback—or a very-Bidenesque final act.

I couldn’t tell you exactly what happened next, but Biden didn’t miss a beat, offering a response that was far-reaching, complex, and lasting 20 minutes. He took the audience on a grand tour spanning campus assault, the Violence Against Women Act, and even, briefly, English common law on wife-beating dating back to 1390. “I want to make a controversial statement,” he said at one point. “If someone in this room took off all her clothes and walked out the door, no man has a right to touch her.” This was not, in fact, a controversial statement. But the crowd loved it.

If anyone else had given this answer, you might wonder about them. But with Biden, it doesn’t seem off: It seems right. While the famously verbose politician took his time delivering his stump speech that night, but he seemed to savor the audience questions, and the opportunity they presented to to tell stories, to be the Joe Biden that has delighted crowds for decades.

All through the summer and fall, Biden’s campaign viewed South Carolina as his strongest early primary state, based largely on the support of African American voters who make up around 60 percent of the Democratic electorate. Since then, his polls have dipped, and poor performances in Iowa, New Hampshire, and Nevada have persuaded some voters that Biden might not be the strongest candidate to take on President Donald Trump—that he might not be the Joe Biden they remember from his years as Barack Obama’s vice president.

But then came a strong debate performance on Tuesday in Charleston, followed by the endorsement of the state’s preeminent Democratic politician, Rep. Jim Clyburn, and a string of polls showing Biden regaining ground. Winning in South Carolina tomorrow is considered make or break for Biden. Even a small margin of victory would show weakness in a contest that just a few months ago he was expected to win by 20 or more points. As he makes his last stops in the final hours before Saturday’s primary, it could be the beginning of either a comeback—or a strong and very-Bidenesque final act.

Monday’s rally took place on the campus of Carolina Coastal University just inland from Myrtle Beach, but students were far outnumbered by Gen Xers and Baby Boomers from the surrounding area, a magnet for out-of-state transplants and retirees. The crowd included moms from Tennessee who had moved to South Carolina  the schools, moms from New York seeking lower taxes, and retirees from Ohio, Florida, and California. They were all united by abiding fondness for Biden, their distaste with Democratic frontrunner Bernie Sanders, and an even greater antipathy for President Donald Trump. All together, they represented a group expected to play a large role in primary: suburban white voters.

While no Democrat will get far in South Carolina without support from African Americans, as is happening nationwide, other demographics disillusioned with the president are beginning to enter the state party’s fold. “I’ve long predicted a whiter Dem primary in SC this year,” Tyler Jones, a Democratic consultant in Charleston, tweeted Thursday. “The independent/moderate, white, suburban anti-Trump vote (esp. on the coast) has skyrocketed since 2016.” And, he said, “it’ll help Biden on Saturday.”

That prediction tracked with the scene at Biden’s rally, where supporters voiced similar sentiments over and over: “He’s a man of honor and integrity,” “I think he’s got the best shot,” and “I’ve always liked Uncle Joe.” They seemed to agree that Sanders was not their man, saying “I can’t stand Bernie,” “I don’t believe he can deliver what he promises,” and offering a prayer, “Oh please God, not Sanders.” But the crowd would suck it up and vote for Sanders over Trump. “I would have to,” “anybody who can get that pathological liar out of the White House,” and “I would vote for my dog over” Trump.

On Friday morning, Joe Biden went to church in Sumter, a blue dot an hour east of Columbia. The crowd was older, about half white and half black—like Sumter itself—and filled with true Biden believers. “I’m heavy leaning” toward Biden, said Doug Seaver, 51, as he waited for the event to get underway, hoping his remarks would “seal the deal.” His mother, Diane Bethea, 73, however, was doubt free. “This is a Joe Biden household,” she said. “I have no interest in Bernie Sanders. Joe has been a rock solid Democrat his whole life.” But to be clear, her son added, “we’d vote for an empty tin can” over Trump.

Willie Dennis, 84, said he’s supported Biden since Barack Obama chose him to be his vice president. “All who are not for him, I told them you’re not my friend,” he said with only a hint of a smile. “Ditto,” added his wife, Gardenia R. Dennis.

These are the people Biden is now counting on in South Carolina. Middle aged and older folks, both white and Black, who know him and trust him, who are ready to follow him as he launches into stories and down twisting tangents, alongside the suburban voters who hope he can provide a path that will lead them out of Trump’s America. But first, they’ll have to launch him out of South Carolina.

As attendees piled into cars and pulled out of the church and on to the road, two young Sanders supporters were going door to door on foot, headed straight their way.