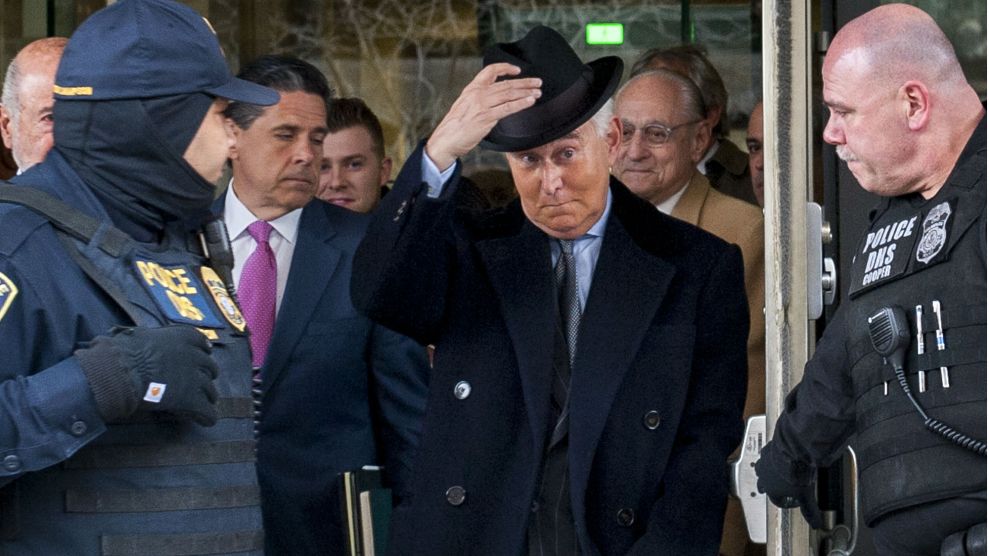 Federal Judge Amy Berman Jackson on Thursday sentenced Roger Stone to 40 months in prison for lying to Congress, obstruction of justice, and witness tampering. At the same time, Jackson criticized President Donald Trump’s unprecedented meddling in a case that involved his own conduct.

“The dismay and disgust at the defendant’s belligerence should transcend party.”

“The truth still exists; the truth still matters,” Jackson said, in a rebuke of Stone’s lawyers’ argument that his lies to Congress were insignificant. “Roger Stone’s insistence that it doesn’t, his belligerence, his pride in his own lies are a threat to our most fundamental institutions, to the foundations of our democracy. If it goes unpunished, it will not be a victory for one party or another. Everyone loses.”

“The dismay and disgust at the defendant’s belligerence should transcend party,” she said.

A jury in November found Stone guilty on all seven counts with which he was charged. During the 2016 presidential contest, Stone, a longtime political adviser to Trump, established himself as an apparent intermediary between Trump’s campaign and WikiLeaks, according to testimony at Stone’s trial. In public, Stone bragged that he had inside information on WikiLeaks’ plans to release emails stolen from Democrats, including from Clinton campaign chair John Podesta. In private, Stone gave Trump and other campaign officials updates on what hacked emails WikiLeaks planned to release, his trial revealed.

But in testimony to the House Intelligence Committee in 2017, Stone lied by claiming that he had not communicated with the Trump campaign about what he claimed to have learned regarding WikiLeaks’ plans to release emails, and by denying that he had exchanged emails or texts related to WikiLeaks or its founder, Julian Assange, among other topics. Stone also lied by telling the committee that his intermediary to WikiLeaks was Randy Credico, a comedian and radio host who had interviewed WikiLeaks founder Julian Assange in August 2016.

It remains unclear whether Stone really did have insider info about Wikileaks’ intentions. Jackson addressed that issue Thursday. “Whether or not Stone was ever actually in communication with Assange, he understood full well” that news of his role as a supposed go-between for Trump campaign with WikiLeaks “could reflect badly on the president,” she said. The judge cited emails that suggest Stone was eager to hide actions in order to protect Trump.

Jackson emphasized Thursday that Stone’s prosecution was not a result of his political activity, saying it came about because “he inserted himself smack in the middle of one of the most incendiary issues of the day” and lied to Congress when questioned about it. “He was not prosecuted, as some have complained, for standing up for the president,” she said. “He was prosecuted for covering up for the president.”

Prosecutors argued during Stone’s trial that when Credico threatened to reveal that Stone had misled lawmakers, Stone tried to silence him with threats—including an April 2018 email in which he told Credico: “Prepare to die, cocksucker.” In a sentencing recommendation earlier this month, the prosecutors who tried the case, all career government employees, said that email constituted a threat to cause physical harm to a witness. Under federal sentencing guidelines, that meant a longer recommended prison sentence: seven to nine years.

News of that sentence recommendation drew Trump’s ire. In a 1:48 am tweet the next morning, he decried “a horrible and very unfair situation.” That was just one in an ongoing series of tweets in which Trump has attacked the prosecutors, jurors, and judge in the case. The next day, the Justice Department said it would issue a new, more lenient, sentence recommendation for Stone, a move that caused all four prosecutors on the case to withdraw in protest.

Attorney General William Barr later admitted he had intervened in the case, but he claimed he had decided to do so prior to Trump’s tweet. Barr’s action nevertheless drew calls for his resignation, and the fallout left the attorney general scrambling to distance himself from Trump’s efforts to influence the department. Trump went so far as to tweet again about Stone’s case during Thursday’s sentencing hearing. His comments have drawn speculation that he might pardon Stone, perhaps before Stone is sent to prison, which will not occur for at least a few weeks as his lawyers pursue a long-shot request for a new trial.

Trump suggested to reporters later Thursday that he wouldn’t make a decision on a pardon while a motion by Stone’s for a new trial is still pending. “I’m not going to do anything in terms of the great powers bestowed upon a president of the United States,” Trump said. “I want the process to play out. I think that’s the best thing to do because I would love to see Roger exonerated.”

John Crabb—one of the prosecutors in the DC US attorney’s office who took over the case after the prior prosecutors withdrew—said in court Thursday that the government continued to support a longer sentence for Stone. “This enhancement applies,” Crabb said. “And we ask the court to apply it.” In taking that position, the new prosecutors seemed to distance themselves from the Justice Department’s efforts to reduce the recommended sentence. Crabb also defended the “good faith” of the earlier prosecutors and said the Stone’s prosecution was “righteous.”

Jackson said she agreed with Crabb’s reasoning, but the sentence she ultimately settled on was less than half of what prosecutors had originally asked for.

Trump’s intervention in Stone’s case has been widely denounced as improper, with many critics faulting him for intervening to help a friend. But Trump has a personal stake in Stone’s sentence. Stone likely has information on Trump’s interest in and knowledge of WikiLeaks’ plans to release hacked Democratic emails, but Stone has said he will not cooperate against Trump. The trial also revealed that Trump likely lied to special counsel Robert Mueller when Trump claimed in writing that he did not recall communicating with Stone in the summer of 2016 about WikiLeaks.

Jackson on Thursday took aim at Trump’s recent statements, which have included attacks on her, and on a juror in the case. “The court cannot be influenced by those comments,” the judge said. “They were entirely inappropriate.” She also said that the case highlights the importance of having neutral judge make legal rulings. “Not someone who has a longstanding friendship with the defendant,” she said. “Not someone whose political career was aided by the defendant, and surely not someone whose personal involvement underlined the case.”