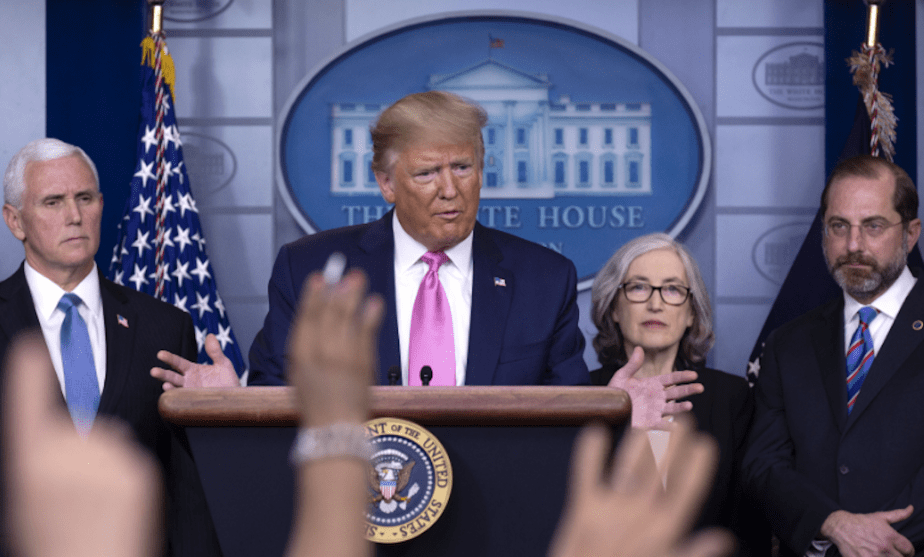 As the world scrambles to contain the deadly coronavirus outbreak—which as of Friday has infected at least 83,000 people in 53 countries—President Donald Trump and his allies are busy pushing the conspiratorial narrative that press coverage of the epidemic is aimed at destroying him. The apparent attempt to politicize the global health crisis is likely to fuel investors’ concerns that the Trump administration is woefully underprepared to tackle the rising threat of coronavirus in the United States.

The effort first started Monday when Trump—without evidence—accused the media and Democrats of hyping the coronavirus in order to make the situation look “as bad as possible” and tank the stock market. Since that tweet, Trump’s allies and conservative news personalities have followed suit. Here’s former Arkansas Gov. Mike Huckabee (R) on Laura Ingraham’s show Thursday night:

Mike Huckabee says Trump "could personally sick the virus out of every one of the 60,000 people in the world, suck it out of their lungs, swim to the bottom of the ocean and spit it out, and he would be accused of pollution for messing up the ocean." pic.twitter.com/X7xbC5ebDz

Grabbing the baton the next morning, Pete Hegseth echoed the message on Fox & Friends, though he insisted he was doing so only reluctantly.

But the conspiracy theory extends well beyond the walls of Fox News. On Friday, during an appearance at the annual Conservative Political Action Conference, acting White House chief of staff Mick Mulvaney accused the media of exploiting the virus to hurt Trump.

“The reason you’re seeing so much attention to it today is that they think, ‘This is going to be what brings down the president.’ That’s what this is all about,” he told the audience. Mulvaney also repeated Trump’s efforts to downplay the threat. “It’s not a death sentence, it’s not the same as the Ebola crisis.”

Mulvaney was one of several senior administration officials—including members of the president’s coronavirus task force—to appear at the conference this week, further fueling questions of whether the Trump administration is taking the threat seriously.

If you’re wondering if the coronavirus could soon warp into a 2020 rallying cry, well, Team Trump already has it covered:

But last night, just as the White House was explaining the timeline for a vaccine trial, CNN cut away to a townhall with Michael Bloomberg.