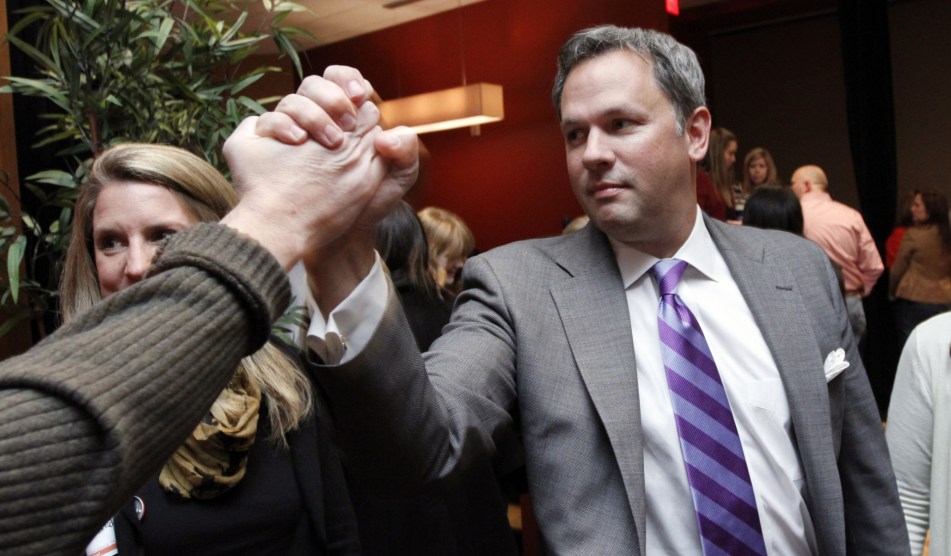 Dan Forest is greeted by a supporter in 2012.Chris Seward/ZUMA

On Thursday, Greg Lindberg, one of the largest Republican political donors in North Carolina and a self-described billionaire insurance baron, was convicted of trying to bribe a state official who oversaw his businesses.

It’s a case that has torn the Republican firmament in the state apart—right before a pivotal election year with new maps that are expected to help Democrats pick up seats.

The April 2019 indictments against Lindberg were a bombshell. Lindberg had been secretly recorded by North Carolina Insurance Commissioner Mike Causey, who was working with the FBI, as the businessman tried to bribe Causey with $2 million. The charges linked state GOP Chairperson Robin Hayes to the scheme, who promptly stepped down from his role. He pled guilty and is now awaiting sentencing. (Dallas Woodhouse—dubbed the “Roger Stone” of North Carolina politics and Hayes’ second hand—stepped down too.) The indictments also revealed that Republican Congressman Mark Walker’s political action committee received $150,000 from Lindberg at the same time Lindberg was asking Walker to exert pressure on Causey. (Walker is not accused in the case.)

And even though he wasn’t directly tied to the scheme, it was a big problem for a rising star in the party: Lieutenant Governor Dan Forest. Lindberg was one of Forest’s biggest donors. Amid the trial earlier this week, Forest won the Republican nomination to take on Governor Roy Cooper in November.

Forest’s connection to Lindberg is already plaguing the candidate. Shortly after his conviction, Gov. Cooper’s campaign released an ad called, “What Else is Dan Forest Hiding?” “Dan Forest continues to try and hide his involvement in the scandal, but reality hits hard today,” a Cooper spokesperson said in a statement released on Thursday. “His biggest donor was just found guilty on all counts for bribing a government official.” On Wednesday, Cooper’s campaign bought the website WhatsDanHiding.com.

Before the subpoena, Lindberg had mainly popped up in the North Carolina press as a mysterious, “little-known investor” who had suddenly become the top Republican benefactor. In 2017, he gave ten times more than any other contributor to the state GOP; he forked over a total of $3.4 million that year to state campaigns and independent expenditure committees.

His intentions weren’t clear at the time. “I don’t think he wants anything, to be honest,” a Democratic state Senator told the press. His background was mysterious too. “Who is Greg Lindberg?” asked one headline, trying to explain the “new big-money donor.” The tall red-haired Lindberg described himself as a “bootstrap entrepreneur” helming the investment company Eli Global—and a 2017 personal statement put his net worth at over $1 billion—however, the company website’s description of the organization doesn’t help explain much: “A Highly Respected Long Term Focused Entrepreneurial Partner Investing Our Own Capital.”

One thing did stand out though: Lindberg was a big fan of Dan Forest. In the three years before Forest formally announced his campaign for governor, Lindberg had already given over $2 million to two PACs supporting Forest’s candidacy. A fundraiser invitation for Forest’s 50th birthday party, reported the News & Observer, listed Linberg as “co-chair.” In 2017, when Lindberg opened a new business in Durham called Global Bankers LLC (now defunct), the press release noted that Forest would be a “special guest.” Lindberg and Forest cut the ribbon together.

Forest’s ambitions for the governor’s mansion became clear during his 2016 lieutenant governor re-election campaign. From his 1984 Blue Bird Wanderlodge RV—an un-airconditioned, $170,000 political symbol christened “Bubba II” and evocative of Jesse Helm’s campaign bus tours—Forest said he was “absolutely” thinking about a run for governor.  “The foundation we’re laying, a grassroots foundation across the state, would be beneficial to [a 2020 run],” he mused. A few months later, his re-election win cemented his status as the GOP favorite for governor. He garnered more votes in North Carolina than both Gov. Roy Cooper and President Donald Trump.

Hints, if not outright declarations, soon followed. In 2017, North Caroline Rep. Mark Meadows, the powerful head of the House Freedom Caucus, told a local paper he endorsed Forest for governor. In August 2018, Forest criticized Gov. Cooper’s position on interstate tolls by saying an issue “would be fixed by a Forest administration.” Perhaps most importantly: Forest was lieutenant governor. “The only purpose of that job is to give aspiring governors a perch from which to run for higher office,” explained Taylor Batten in the Charlotte Observer. Over the last 50 years, every lieutenant governor has tried to go up a rung.

But the plan fell apart. In early October 2018, the Department of Justice issued a subpoena for Lindberg. It bore fruit. In April 2019, Robin Hayes was arrested and indicted for lying to the FBI about the funneling of $2 million from Lindberg to try to bribe the new Republican insurance commissioner to get rid of regulators hassling his companies. At a meeting at an airport in Statesville, North Carolina, Mike Causey discussed hiring an employee of Lindberg’s, John Palermo, onto the commission. “What’s in it for me?” Causey asked. Lindberg, according to the indictment, promised, “he would create an independent expenditure committee…and fund it himself with $1 million to $2 million.” On a call after the meeting, Hayes promised Causey that Lindberg’s people “always do what they say they’re going to do.” And Forest managed to involve himself in the scandal: it was his chief of staff that connected Lindberg and Causey in 2017.

Lindberg’s problems stretched beyond the political realm too. In February 2019, the Wall Street Journal reported on a mass scheme by Lindberg to “divert” $2 billion from his insurance company’s acquisitions into entities he controlled. Lindberg took the profits to lavish heights, purchasing a “French-inspired estate” in Raleigh for millions. (Lindberg has denied any wrongdoing) In July, Cooper signed “The Lindberg Bill” to eliminate a loophole that allowed for the investment strategy.

The final straw occurred in late June 2019. The state Insurance Agency took control of multiple Lindberg businesses, according to the Wall Street Journal—including Global Bankers, the business Forest had cut the opening ribbon for. (Lindberg’s attorney described it as a “consensual rehabilitation process…to reduce the percentage of these insurance companies’ investments where Mr. Lindberg maintains an economic interest.”)

“What he’s doing is one of the best examples we’ve seen,” wrote a local paper’s editorial page of Lindberg, “of the kind of power that could distort the political process and create a government by highest bid.”

Lindberg, now convicted, could be sentenced to up to 20 years in prison.

Forest has other baggage. He was a strong supporter of HB2, the state’s 2016 bathroom bill, and isn’t backing away from it. “I was one of the biggest proponents of HB2,” he said recently. Plus, in a church address, he said that “no other nation, my friends, has ever survived the diversity and multiculturalism that America faces today, because of a lack of assimilation, because of this division, and because of this identity politics.” (Jamey Falkenbury, Forest’s communication director, said the speech was taken out of context and “fed to [the paper] by a far-left George Soros-run organization.”) But Lindberg might be the biggest.