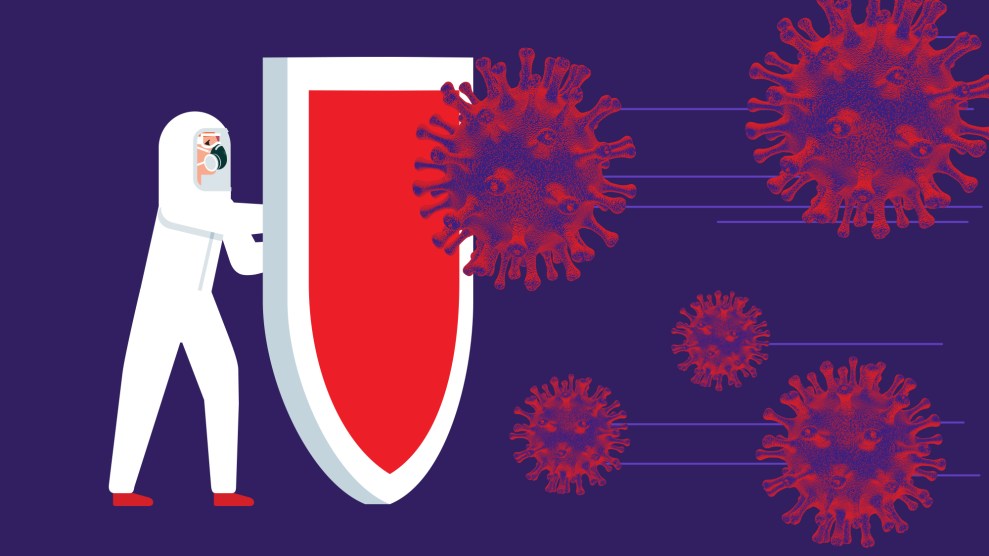 There’s a lot of information out there about how to protect yourself from the coronavirus—which hand sanitizer to buy, when to wear a mask, which 20-second hand washing songs to hum, how to have safe sex during the outbreak, and so, so much more. But there isn’t much about how and why the body responds to the coronavirus.

Why, for instance, do some people show symptoms and others don’t? Why don’t children seem to be getting sick? Why are older folks at a much higher risk of dying? How many people will need to be infected to achieve herd immunity? And, crucially, how—if at all—can we give our immune systems a better chance of fighting this thing?

I posed some of these big, complicated questions about individual and community immunity to three experts: Rachel Graham, an assistant professor in the department of epidemiology at the Gillings School of Global Public Health at the University of North Carolina at Chapel Hill; Nathan Grubaugh, an assistant professor of epidemiology of microbial diseases at the Yale School of Public Health; and John Swartzberg, a clinical professor emeritus specializing in infectious diseases and vaccinology at UC Berkeley’s School of Public Health.

Below I’ve distilled our conversations into a few key points:

Many of the symptoms of COVID-19 are due to our body’s response to the virus, not just the virus itself.

When the coronavirus infects us, the symptoms we end up getting are not simply due to the virus attacking the body. Often, the symptoms we exhibit are our immune systems responding to it. Coughing, explains Swartzberg, is one technique humans have developed to get pathogens out of our airways. “It’s a defense mechanism,” he says, much like how food-borne pathogens can result in diarrhea and vomiting. “Those are mechanisms that we use to get those organisms outside of us.”

Our immune response to the virus also causes inflammation in our lung tissue, which fights off the virus but can cause tissue damage in the process. “Ironically, to kill the virus, we wind up having to damage our own airways and lung tissue,” Swartzberg says. The inflammation can also make it hard to breathe, which is why some people infected with the coronavirus need external oxygen or a ventilator.

Once inflammation does its work, and the tissue that “harbors” the virus is destroyed, he says, our bodies can begin to heal.

Some people who are infected with the coronavirus will show symptoms. Others won’t. Unfortunately, it’s not clear why.

People have responded in vastly different ways to COVID-19. In some people, Swartzberg says, the virus prompts so little inflammation in their lungs that they don’t even notice they’re sick, while others exhibit minimal symptoms that people might be inclined to ignore. But in some individuals, he says, the virus causes an overwhelming inflammatory response—called a “cytokine storm,” or a mass release of proteins called cytokines and immune cells—that can be deadly.

Why people respond differently is not well understood, he says.

Graham notes that some otherwise healthy people are just predisposed to getting sick. “It could have to do with the tendency of just the individual to show symptoms to respiratory infections,” she says.

Graham adds, “It could be personal genetic factors, but it could also be that people who are younger also tend to be more active,” which can help keep your immune system healthy.

It’s true that contracting the virus is deadlier for people over 60. The reason is likely in part due to how their immune systems respond to the virus.

For older people, Graham says, their immune systems may be gradually declining, a phenomenon called “immunosenescence.” While this is happening, if they get a respiratory infection, their immune system response can be “hyperactive,” which means it can over-respond to pathogens like the coronavirus. But they may be low in the correct, infection-fighting cells, she says, “so your body just releases whatever it has, and it releases gigantic proportions of whatever it has.”

A hyperactive immune response can cause irreparable damage in fragile lung tissue. “When you’re talking about the lungs, you’re talking about a single cell layer of gas exchange-capable cells, and when you’ve damaged those, you can no longer provide oxygen to the rest of your body,” says Graham. This, unfortunately, can be dangerous and even fatal.

Children and babies aren’t really getting sick. There are a few theories about why.

Respiratory infections are often worse for the very young and very old. It’s common to see a U-shaped mortality curve of who is most at risk, Grubaugh explains, with the young on one end and the elderly on the other. The flu, for instance, hits the youngest and the oldest the hardest most years, producing a U-shaped curve.

But in the case of the novel coronavirus, the elderly are the most at risk and children largely seem to be spared. (That said, children getting sick is not unheard of; in China, about 2 percent of reported cases were children. And although most children who fall ill show mild to moderate symptoms, in some the response can be severe or critical, a recent study of more than 2,000 children in China found.)

Early on, Swartzberg says, one of the theories about why children weren’t getting sick was that they weren’t exposed to the virus in the first place. At the start, for example, in Wuhan, China, those primarily infected were adults shopping at the animal market where the coronavirus is thought to have originated. Experts thought that could be why adults were coming down with the illness.

Swartzberg doesn’t seem to find that hypothesis convincing—”eh, maybe,” he concludes. Another hypothesis: “Is there something about the immune status of young children?” he asks. “And the answer to that is we don’t know.”

There’s some data to support that second hypothesis, though. According to Graham, research suggests children can become infected, but they may not necessarily develop severe disease or really even disease at all, meaning they won’t show symptoms but can pick up the virus and pass it on to others. Again, it’s not clear why.

Increased or prolonged exposure to the virus may lead to more severe disease. That could be why doctors and health care professionals may be at a higher risk than the rest of us.

Late last month, when the virus had infected 80,000 worldwide, the Los Angles Times reported that 3,387 health workers in China had contracted COVID-19. Among the first health care professionals to die were two doctors, just 29 and 34 years old.

As a whole, doctors and nurses are more exposed to the coronavirus just by nature of working with the ill. But research also suggests that how much virus they’re exposed to matters, too. As Anna Yeung-Cheung, a virologist at Manhattanville College, told Slate‘s Shannon Palus in February, the reason a young doctor died of COVID-19 is, in part, because he was a doctor. “It’s a dosage thing,” she said.

While this hasn’t been tested in human trials for obvious ethical reasons, we do have some information about how other coronaviruses affect animals: Researchers have found the more of a virus the animal is exposed to, the worse disease it develops. “When we infect animals with related coronaviruses with a lower dose of viral particles, they don’t become as ill as if we infect them with a higher dose of viral particles,” Graham says. “So there is a dose-dependent response to illness.” The animal models are “a pretty good indicator,” she says, of why health professionals who work directly with infected people are experiencing more severe illness.

If you get the coronavirus once, we don’t know if you’re immune from getting it again.

If you get measles, Swartzberg explains, you’ll be immune for the rest of your life. Your body’s antibodies and the cells that produce them will be ready to fight off the virus if you ever encounter it again. “That’s a typical response to an infectious disease,” he says. “But not all infectious diseases.” In the case of syphilis, for instance, we don’t develop immunity in the same way.

Historically, with other human coronaviruses—the ones that nobody talks about because they basically only cause the common cold—experts have observed limited immunity after an infection. Once you get one of those viruses, says Graham, you typically gain immunity for a couple of years.

It’s not yet clear which camp COVID-19 falls into. “It’s too early to tell what kind of immune response people are amounting to this virus and if they’re able to produce the proper kinds of antibodies that would neutralize a subsequent infection,” Graham says.

Still, for our purposes right now, let’s assume getting the coronavirus once means you’re protected. That means we could eventually see herd immunity, right?

Herd immunity occurs when enough people in a community are immune to a disease that it won’t spread to people that are unprotected. That is, the herd protects the most vulnerable individuals.

So if we assume people who recover from the coronavirus are protected for at least a year, Swartzberg says, “modeling suggests herd immunity could occur as early as a few months to as long as a year or more.”

The counterintuitive part is, the more people that become infected, the earlier we’d see herd immunity. So if social distancing and other measures like hand washing are effective, and the virus spreads more slowly, it’ll take longer for herd immunity to set in.

That said, do not consider this a recommendation to go outside and infect yourself!! Social distancing can reduce the stress on our health care system and reduce deaths in the long run.

Finally, how can individual people protect themselves? Is there anything we can do to boost our immune systems?

There are no treatments or vaccines for the coronavirus at this time, so taking general steps to prevent illness is the most important thing you can do. “Be aware. If you’re around people who seem to be ill, watch that you’re not getting so close that someone can sneeze on you. Make sure you’re washing your hands. Make sure you’re washing your face. Make sure you’re not touching your face,” Graham says. “Make sure, if you need to put your hand on your mouth and on your nose, that your hand is clean.” This is already advice you’ve heard at this point, but unfortunately, there’s nothing else besides some sleep, exercise, and a good diet to protect your immune system at the moment.