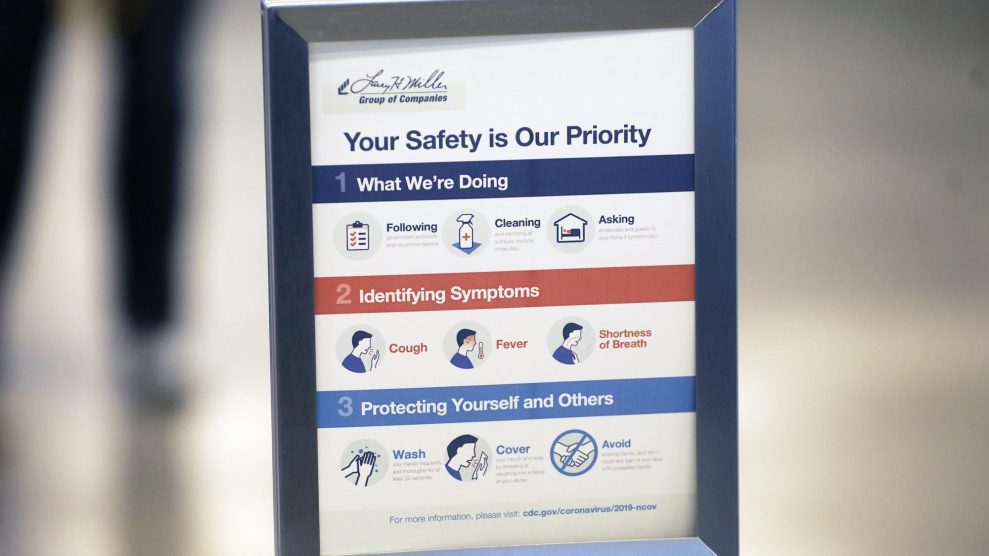 A sign is shown next to a sanitizing station.Rick Bowmer/AP

On Friday, the liberal advocacy organization Center for American Progress hosted a four-person panel of public health experts focused on the emerging threat novel coronavirus poses to the American public. The panelists were heavyweights of Democratic policy circles, with expertise spanning from national security to epidemiology—the sort of experts who might have played a major role in a Hillary Clinton presidency or who Joe Biden would call for advice. Three worked in various capacities for the Obama Administration and Ronald Klain, who is now the general counsel for a company that invests in startups, was responsible for coordinating the US response to the 2014 Ebola outbreak.

They described a near future in which the United States government has failed to adequately address the epidemic. The image was bleak: Without proper testing, it will be impossible to chart the spread of the disease, and unsustainable spikes in hospital visits will overwhelm an undersupplied healthcare infrastructure. There would be no way to determine the extent of the unexpected consequences for the educational and service sector, nor any clear sense of when the end of the epidemic might occur.

“In my belief, we are in a situation where the idea of fully stopping the threat is not a realistic goal,” said Jennifer Nuzzo, an epidemiologist at Johns Hopkins Bloomberg School of Public Health. “And we are more at a point where we are trying to mitigate the impacts of the virus on our communities.”

Ezekiel Emanuel, chair of the Department of Medical Ethics and Health Policy at the University of Pennsylvania and who advised the White House Office of Budget and Management director during President Obama’s first term, offered an alarming hypothetical scenario. Suppose 20 million Americans became infected with coronavirus, he said, and that the fatality rate would be 0.5 percent. Though, that’s just “a probable guess…because we don’t have the data.” (The World Health Organization puts the current death rate at 3.4 percent.) That would mean nearly 100,000 people died, and hundreds of thousands more would be hospitalized, which in turn would put enormous pressure on the US health care system. “For those of you who don’t eat or breathe this kind of stuff,” Emanuel said, “we have less than a million beds all throughout the American health care systems and hospitals…we have less than 100,000 intensive care unit beds.” If a surge of sick people reached the same size as Emanuel’s not-too-unreasonable example, the US health care infrastructure would be completely overwhelmed.

At this point, the US is far from that situation. Officially, there are about 800 people in the US with coronavirus, and 27 have died as a result of contracting it. The illness has appeared in 36 states and Washington, DC, and eight governors have already declared states of emergencies. However, the experts emphasized those numbers aren’t reliable because there is a widespread lack of available testing. Without exaggerating the danger, all the panelists could foresee a widespread outbreak. Here are four recommendations they would like to see the Trump administration implement which they believe would not only mitigate the current coronavirus spread, but prevent future infectious disease outbreaks.

“We are far behind other countries in testing people for this virus,” Klain said, and that matters. In order to most effectively react to the disease and strategically contain its spread, the number of people actually infected needs to be known. There are few test kits, and their initial distribution was stunted after it was discovered that the CDC’s first wave of tests gave inaccurate readings. The Trump Administration promised to have one million coronavirus test kits ready for distribution by March 6, but it was only able to provide 75,000. As of Sunday, the US had tested about 1,500 people, while the UK had conducted more than 20,000 tests. With uncertainty about the true extent of the virus, there has been panic at health care facilities. “When we hear the virus is in X states and not Y states, that’s largely because we haven’t tested in Y states,” Klain said.  “That lack of competence is causing us to be completely blind as to where this virus is.”

He estimates that 30 million tests would be necessary for an accurate picture of the number of Americans with the disease. Emanuel described population surveys and testing both where there have already been major outbreaks like Seattle and in other places with fewer reported cases as a “critical” step for assessing the rate of the spread of the illness. To fill the demand, some private labs are producing their own coronavirus tests. Though, unlike the CDC tests, they won’t be free—something that gives the uninsured or underinsured reason to delay testing. Citing the disparity this creates, Emanuel said they should be free.

Disease outbreaks should be framed as a national security issue

Two years ago, Lisa Monaco, a homeland security advisor for the Obama Administration, co-wrote an op-ed article in Foreign Policy highlighting the Trump administration’s apparent indifference to the threat of pandemics. She pointed to federal budget cuts in outbreak prevention of “over 50 percent from those peak levels” during the Ebola outbreak. The ominous title, “The Next Pandemic Will Be Arriving Shortly,” turned out to be prophetic.

Monaco, who is a fellow at the Reiss Center on Law and Security at NYU law school, has long argued that the government should, but typically doesn’t, view infectious diseases as a serious national security threat. Even as the coronavirus wave crashes, she said, a shift in federal priorities is still possible. “We should apply a whole of government approach just to that threat, as we do with other transnational threats,” Monaco says. “By that I mean diplomacy, intelligence-driven approaches, obviously public health and domestic preparedness issues.”

“I think it’s not crazy to say we ought to have a dedicated unit of professionals. Working day in and day out in the NSC just like we have a counterterrorism director.”

That means establishing—or re-establishing—organizations in government that exist specifically to address the threats pandemics present. As a response to the 2014 Ebola threat, the US government did just that, establishing space within the National Security Council for staff overseeing pandemic threats. That concern was substantiated as recently as 2019, when the US intelligence community’s “Worldwide Threat Assessment” report included the danger of disease. “[The US] will remain vulnerable to the next flu pandemic or large scale outbreak of a contagious disease that could lead to massive rates of death and disability,” the report says.

And yet, the Trump Administration hasn’t had a dedicated infectious disease specialist on the NSC since May 2018. “I think it’s not crazy to say we ought to have a dedicated unit of professionals,” Monaco said. “Working day in and day out in the NSC just like we have a counterterrorism director.” With those structures in place when the next pandemic hits, time won’t be wasted creating an organizational structure to respond—but rather mobilize one that is already in place to react immediately.

“So many people are seeking information,” Nuzzo said. “And it’s because there’s no information to be found. The government websites on this are utterly abysmal.” The government needs to consolidate the information it provides across numerous departments to send a single coherent message to the public with “one portal for people to understand how to connect.” And that’s not only for the patient’s benefit, she continued, “Providers need this. They need to be comfortable seeing patients, particularly ones that don’t need hospitalizations.”

That centralization of data should not only take place where health information is distributed, but also where it’s collected. Each state is now implementing its own measures for testing and reporting, but Nuzzo is concerned that without an established standard, understanding the spread of coronavirus at a national scale will be impossible. “I’m deeply worried that we have no plan for understanding who is getting tested where,” she says. “We should…know what strategies states are going to be using. I don’t think—frankly—they’ve even developed those strategies.“

The public misconceptions around coronavirus aren’t only the result of decentralized sources of information. Some of the information from the Trump administration, the panelists said, directly contradicts best practices advised by public health officials. That inconsistent narrative could prove dangerous on a micro level if someone heeds the Trump administration’s efforts to minimize the coronavirus threat and, for example, skips a hospital visit.

But this inconsistent narrative also has led to the further deterioration of the relationship between the government and public health experts. “The scientists who are critical to this response: epidemiologists, biostatisticians, virologists. Those people, they’re in high demand,” Emanuel says. “They’re fundamentally scientists committed to getting the truth, not whitewashing whatever they got.”  For many of the government’s health experts, a career spent being ignored or contradicted could be an incentive to enter the private sector, especially when their areas of expertise are in high demand in sectors like academia and the pharmaceutical industry. More than a thousand scientists have left the federal government since 2017, while the Trump administration has made deep cuts to the sectors of the CDC that oversee pandemic mitigation.

Even as the immediate effects of coronavirus begin to emerge, the panelists said the federal government should be looking far down the road as it—they hope—incorporates stronger pandemic preparedness measures. “Don’t fool yourself, we’re going to have a next one,” Emanuel said. “It’s out there and it’s going to come. We need to be better prepared socially, medically, and politically for this.”