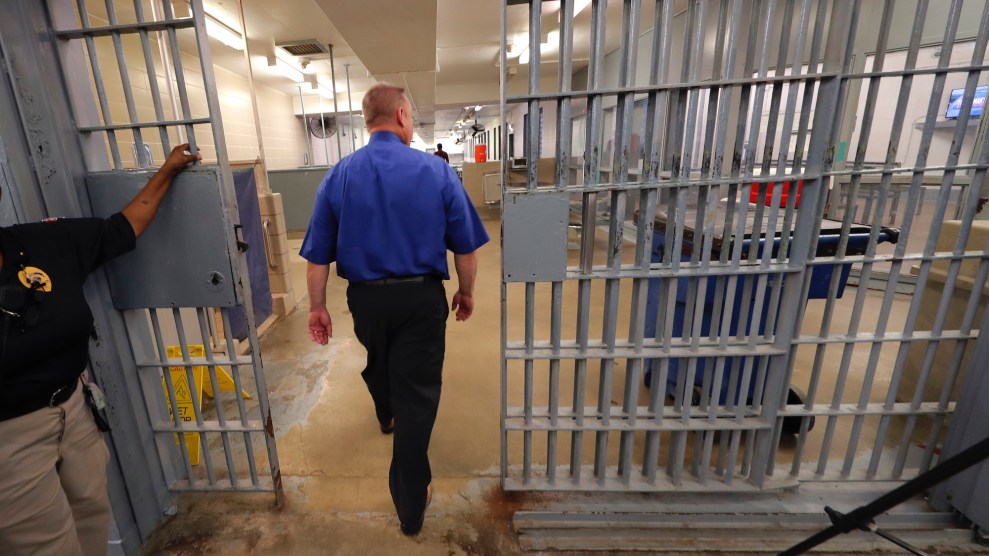 An administrator walks through a group cell inside the Winn Correctional Center, a for-profit prison in Louisiana used by Immigration and Customs Enforcement, during a September tour.Gerald Herbert/AP

Last week, a Cuban asylum seeker called me from a for-profit jail in Louisiana to express the same fear shared by people across the world. The man, whom I’ll call Alberto to protect him from potential retaliation, had more reason to worry about the coronavirus than most: He was detained in a crowded room alongside nearly 100 others at a jail run by LaSalle Corrections, a company with a long record of providing shoddy medical care. “If coronavirus gets in here,” he said, “it’s going to be a massacre.”

There is a simple step the agency could take to reduce the risk of the coronavirus spreading and potentially causing more deaths in its custody: ICE could release people, particularly those who are most vulnerable to the virus, who don’t pose a threat to public safety. That would lead to thousands of people being released from detention. So far, ICE appears set on keeping detention numbers high. In the first week of March, ICE took more than 5,400 people into detention, a similar rate to before the outbreak began.

“If coronavirus gets in here,” Alberto said, “it’s going to be a massacre.”

Marc Stern, who served as the health services director for Washington state’s department of corrections, explained that reducing detainee populations would slow the spread of the virus by creating more distance between people. In a recent memo making recommendations to Washington jails, Stern, now an assistant professor at the University of Washington’s School of Public Health, wrote that local officials should ask whether there are inmates who can be released on their own recognizance or whether they could employ alternatives to detention. Anne Spaulding, a medical doctor and correctional health expert in Emory University’s epidemiology department, has also recommended that jails consider detention alternatives such as electronic monitoring.

Fortunately, ICE has broad authority to release people in its custody. Eunice Cho, a senior staff attorney and detention expert at the American Civil Liberties Union, said, “The question is whether the government will actually exercise this and mitigate what continues to be a very foreseeable disaster.” Luz Lopez-Ortiz, a senior attorney at the Southern Poverty Law Center, said, “This is a disaster waiting to happen and there’s no reason it should be.”

As of Tuesday, four people in ICE custody had been tested for the coronavirus; all tested negative. But if—and presumably when—the coronavirus enters ICE detention centers and the county jails the agency contracts with, it could be particularly difficult to stop the virus from spreading. “Immigration detention is like a cruise ship but obviously worse for many reasons,” Cho explained. ICE detainees often live together in large rooms filled with dozens of bunk beds, not in cells. Then there are ICE’s longstanding issues with medical care. Cho’s experience with ICE’s handling of infectious diseases does not give her much confidence in its ability to respond to something as serious as the coronavirus. (ICE did not respond to questions about how many people it has tested for the coronavirus or whether it plans to release people from vulnerable populations.)

At a congressional hearing on Wednesday, Rep. Grace Meng (D-N.Y.) asked acting ICE director Matthew Albence whether he would consider releasing detainees who are most at risk of the coronavirus, including older people and those with preexisting medical conditions. “It would be a prudent course of action,” she said. Albence replied, “The people that we have in detention are there because they’re public safety threats or flight risks.” The implication was that his hands were tied: He couldn’t let them out. That is not true, nor is it true that everyone in ICE custody is a flight risk let alone a threat to others. “When it comes down to it,” Cho said, “ICE has the power to decide who they release or not.”

Federal judge James Boasberg has repeatedly found that ICE is unnecessarily subjecting asylum seekers to mandatory detention. Between 2011 and 2013, five of ICE’s 24 field offices approved 92 percent of asylum seekers’ requests to be released on parole. In the first months of the Trump administration, that rate dropped to 4 percent. In response to a class action lawsuit, Boasberg ruled that the government needed to return to following its own parole policy, which requires it to release asylum seekers who don’t pose flight risks or threats to public safety. Still, ICE kept denying most parole applications, a decision that forced Ansly Damus, a Haitian asylum seeker, to spend two years inside a windowless jail with no access to fresh air.

Last year, the SPLC and the ACLU of Louisiana sued the Trump administration after it started ignoring ICE’s parole policy at a sixth field office in New Orleans. The office, which covers five southern states, had approved 75 percent of parole applications in 2016. By 2019, it was approving none. “Defendants offer absolutely no explanation for the precipitous nosedive in the parole-grant rates issued by an Office that has allegedly preserved the same underlying policy for making those decisions all along,” Boasberg ruled in a September decision that forces the New Orleans office to follow the parole policy.

At first, lawyers with clients in Louisiana saw no sign that ICE was complying with Boasberg’s order. In February, ICE’s parole rate in the region rose to 21 percent, up from 2 percent in January. Lopez-Ortiz, who is working on the case for the SPLC, said deportation officers are telling asylum seekers that they’ll only be granted parole if they have close relatives with legal status who make at least about $60,000 per year. Neither of those are requirements under the 2009 ICE parole directive that theoretically remains in effect. Lopez-Ortiz spoke with a US citizen from Cuba whose fiance has been denied parole multiple times. She makes roughly $40,000 per year and ICE officials told her that’s not enough, Lopez-Ortiz said. (Lopez-Ortiz has heard that ICE has a coronavirus contingency plan, but she has not seen it yet. She and others working on the parole lawsuit plan to request it and may seek further action from Boasberg if they decide it is inadequate.)

Across the country, more than 6,500 of the nearly 38,000 people in ICE custody as of Sunday had established a fear of being persecuted in their home countries in interviews with US asylum officers. Only 38 percent of all ICE detainees have a criminal conviction, many of which are for minor offenses like crossing the border without authorization. Among the 50 percent of ICE detainees who were stopped at the border, as opposed to being arrested by ICE within the country, only about one in nine have a criminal conviction.

When we spoke last Friday, Alberto said fellow detainees were always getting the flu. The conditions were horrible and unhygienic, he said. They breathed the same air and touched the same things. Alberto believed the logical response would be for ICE to let them join relatives in the United States while their cases were pending. Instead, he was living in fear at an isolated jail built to hold convicted criminals. “We feel kidnapped,” he said, “and nobody hears us.”