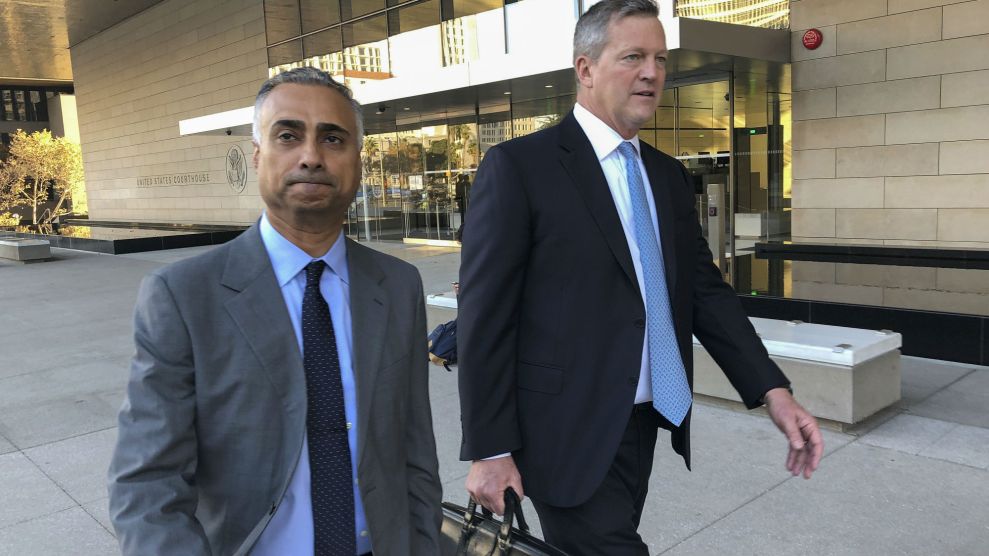 Federal prosecutors in Los Angeles this week described a dizzying array of secret foreign lobbying by a major donor to both political parties—a new twist in a case that could reveal whether there were foreign efforts to funnel money to President Donald Trump’s 2017 inaugural committee.

The donor, Imaad Zuberi, is a longtime Democratic backer who began lavishing funds on Republicans after Trump’s surprise 2016 electoral victory. His largesse included a $900,000 contribution to Trump’s inaugural committee. Zuberi agreed in October to plead guilty to tax evasion, to filing phony foreign agent registration materials, and to making almost $1 million in illegal campaign contributions, much of it secretly put up by foreign entities and people hoping to influence US politics. In their initial filings, prosecutors identified by name only one country, Sri Lanka, for which Zuberi had illegally lobbied. But in a new filing Tuesday that argues for Zuberi to receive significant prison time, prosecutors detailed his secret work for Turkey, Libyan officials, a businessman from Bahrain, and Dmitry Firtash—a Ukrainian oligarch who was deeply involved in Trump’s Ukraine scandal.

From 2011 to 2017, Zuberi lavished more than $3 million in campaign contributions on lawmakers in both parties. He supported the presidential campaigns of Barack Obama and Hillary Clinton, as well as Sens. Lindsey Graham (R-S.C.), Rand Paul (R-Ky.), Tom Cotton (R-Ark.), Mark Warner (D-Va.), and Tim Kaine (D-Va.); and Reps. Brad Sherman (D-Calif.), Debbie Wasserman Shultz (D-Fla.), Ted Lieu (D-Calif.), and others. In 2015, he made donations backing Reps. Ed Royce (R-Calif.) and Eliot Engel (D-N.Y.), then the chairman and ranking member, respectively, of the House Foreign Affairs Committee, a panel from which Zuberi sought various favors. (Engel now chairs the committee; Royce has retired from Congress.) Prosecutors say much of the money Zuberi used for donations came from foreign sources from whom he had solicited these funds—along with millions of dollars in fees—while promising to influence lawmakers on their behalf. There is no evidence members of Congress knew that Zuberi was using foreign funds to make donations.

A big unanswered question in the Zuberi case is where the $900,000 he gave to Trump’s inaugural came from. Federal prosecutors are investigating that and, reportedly, other suspected foreign efforts to win influence by donating to the inaugural committee. In January, Zuberi was charged in New York with obstructing justice by deleting pertinent emails, including correspondence with an unnamed foreign national. A charging document says that person “transferred approximately $5.8 million to the account that Zuberi used to fund [his inaugural] donation at and around the time the donation was made.” Zuberi is expected to plead guilty to that charge, which was added this month to the case against him in California. It is likely that as part of his plea deal, he will reveal to prosecutors details of the inaugural gift.

Around the time of his donation to the inaugural committee, Zuberi was working to help officials from Qatar develop ties with the new Trump administration. Court filings in his case do not mention Qatar, though they do describe his earlier, frenetic efforts to assist other foreign entities.

Prosecutors revealed Tuesday that Zuberi had received $1 million in 2015 from Firtash for acting as an unregistered lobbyist for the Ukrainian gas mogul. Zuberi worked to line up US congressional support for a privately funded “Ukraine development fund” that Firtash’s company could exploit in the wake of the ouster of the pro-Russian former government in the country. Prosecutors say that Zuberi secured for Firtash’s representatives a dinner meeting about the fund with five US senators and a House member during a security conference in Munich in February 2015. Firtash also wanted help fighting bribery charges filed against him in 2013 by federal prosecutors in Chicago. The oligarch is in a protracted court fight to avoid extradition to the US from Austria. According to Tuesday’s filing, Zuberi helped Firtash lobby Congress by claiming that the legal case against him was politically motivated.

Last year, Firtash hired two lawyers with close ties to Trump, Joe diGenova and Victoria Toensing, for a similar task. Firtash told the New York Times last year he hired the duo, a husband-and-wife team with deep ties to Washington conservatives, to directly press Attorney General William Barr to reconsider the bribery case. Toensing and diGenova met with Barr last August, though it is not clear if he agreed to take any steps to help Firtash. (A Justice Department spokesperson told the Washington Post last year that the case against Firtash “has the support of the department leadership.”) Joseph Bondy, a lawyer for Lev Parnas, an indicted associate of Rudy Giuliani, has claimed that Toensing and diGenova offered to press Firtash’s case with Barr if Firtash helped them find dirt on former Vice President Joe Biden in Ukraine—allegedly as part of the scheme that resulted in Trump’s impeachment.

Zuberi’s work for Firtash wasn’t the only instance in which Zuberi seems to have used his status as a generous campaign donor in an attempt influence members of Congress. For example, he managed to get lawmakers to pressure the government of Bahrain in 2013 and 2014 to help a client he had there. “Zuberi concocted a scheme to fool members of Congress into believing that he had invested millions of dollars in a Bahraini development project and that he had been unfairly harassed by the Bahraini government in such a way that Congress should intervene,” prosecutors say. Zuberi, according to court filings, gave $225,000 to 11 lawmakers and to the national campaign committees of both parties as part of this effort. Of that, $78,000 was illegally contributed in the names of straw donors, prosecutors charge. Zuberi then convinced those 11 lawmakers—as well as a senator to whom he had previously given $26,000 in donations—to write letters urging Bahrain to stop interfering with a US investor doing business there. Zuberi in reality had not invested in the project but wanted to help advance his client’s project, according to the prosecutors.

In 2015, Zuberi helped Turkey lobby against a House resolution “urging respect for freedom of expression in Turkey” and condemning Turkish media repression, prosecutors say. Zuberi told a Turkish official that his pressure had caused the measure to be set aside in the House. “[Two Members of Congress] told me this will be delayed by a week 99% because they control the Foreign Affairs Committee. You…push me so hard I pushed…harder than I have ever pushed them for anything,” he wrote on June 1, 2015. “Both asked me why I am pushing this hard for Turkey.” The lawmakers aren’t named in the filing.

The Turkish official, in response, said: “You can rest assured that this will be the first step towards a mutually beneficial relationship.”

In 2015 and 2016, Zuberi allegedly devised a scheme to try to help members of Libya’s divided government, along with an unnamed citizen of the United Kingdom and Saudi Arabia, obtain billions of dollars in Libyan assets frozen by the US and other countries. Prosecutors say Zuberi routed “$3 to $5 million in foreign money into US lobbying campaigns, illegal campaign donations, and donations to quasi-political entities, and exert[ed] his influence with the highest elected officials of the United States.” In return, he sought a commission from the Libyans via payments to an offshore corporation. Prosecutors say that between March and October 2015, Zuberi “orchestrated a series of contributions totaling $232,300 that appear linked to the Libya lobbying effort.” This included donations to Clinton’s campaign and to congressional campaign committees in both parties. Of that, $120,250 came from foreign sources, prosecutors say.

Zuberi later had a financial dispute with his Libyan clients. “Maybe you and [Person A] don’t know how things work in America [and] this is why you guys keep asking me to do something which I can’t do without everyone contributing,” Zuberi said in a May 10, 2015, message.

“This is how America work,” he wrote the next day. “How Washington work.”