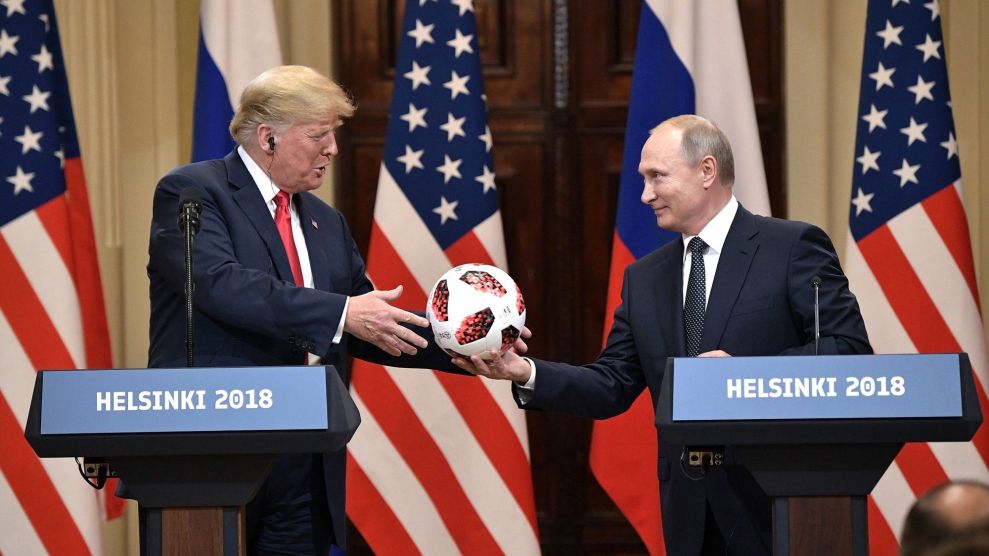 Donald Trump’s presidential campaign filed an utterly flimsy libel lawsuit against the Washington Post on Monday, demonstrating that it remains committed to using the media as target for Trump in the 2020 race and that Trump is still obsessed with removing the Russia stain on his presidency. The filing follows a recent Trump tweet in which he reiterated his claim that this newspaper and other major media outfits are “THE ENEMY OF THE PEOPLE!”

People are disgusted and embarrassed by the Fake News Media, as headed by the @nytimes, @washingtonpost, @comcast & MSDNC, @ABC, @CBSNews and more. They no longer believe what they see and read, and for good reason. Fake News is, indeed, THE ENEMY OF THE PEOPLE!

This lawsuit is similar to the frivolous lawsuit the Trump campaign filed against the New York Times last month. It focuses on two 2019 Post articles about the Trump-Russia scandal. The first article—”Trump Just Invited Another Russian Attack. Mitch McConnell Is Making One More Likely,” by Greg Sargent—noted that Trump had recently declared that he would accept help from a foreign power if it decided to intervene in the 2020 election. That was a fact. Trump had said so during a recent interview with ABC News’ George Stephanopoulos. The article pointed out:

Mueller also concluded that Trump and/or his campaign eagerly encouraged, tried to conspire with, and happily profited off of those efforts. Yet Mueller did not find sufficient evidence of a criminal conspiracy.

That’s the offending passage, as far as the Trump campaign is concerned. The campaign asserts that it was defamatory to state “that Special Counsel Robert Mueller concluded that the Campaign ‘tried to conspire with’ a ‘sweeping and systematic’ attack by Russia against the 2016 United States presidential election.” And the lawsuit claims that “the Mueller Report concluded there was no conspiracy between the Campaign and the Russian government, and no United States person intentionally coordinated with Russia’s efforts to interfere with the 2016 election.”

This is all complete BS.

The Mueller report did not conclude there was no conspiracy between Trump’s 2016 campaign and the Russian attack. It said, as Sargent dutifully noted, that the Mueller investigation found insufficient evidence to establish there was a conspiracy. That is not the same as declaring no conspiracy ever existed. So—boom!—the main factual predicate for the Trump campaign’s case vanishes.

Then there’s this: The Mueller report does show that the Trump campaign attempted to conspire with Russia while the Kremlin was mounting its assault on American democracy. It details how Donald Trump Jr., Paul Manafort, and Jared Kushner took a secret meeting with a Russian emissary whom they were told would bring them dirt on Hillary Clinton as part of a covert Moscow effort to help Trump’s campaign. They claim no such dirt ever materialized, but this was clearly an effort on the part of the Trump campaign to conspire with Russia. (Mueller reported that his investigation “did not establish” that this contact was illegal.)

Moreover, redacted portions of the Mueller report suggest that Trump and his campaign tried to use Roger Stone, Trump’s longtime adviser, as a conduit to WikiLeaks in the summer and fall of 2016, as WikiLeaks was disseminating Democratic material stolen by the Kremlin’s cyber-thieves. So—again, boom!—the Trump campaign was striving to make contact with conspirators involved in the Russian attack.

To recap: Mueller did not conclude there was no conspiracy, and he did show the Trump campaign endeavored to conspire. Case closed.

The second Post article the lawsuit targets is “Trump: I Can Win Reelection With Just My Base,” by Paul Waldman, which was pegged to Trump boasting that he could win reelection without bothering to appeal to swing voters. In the article, Waldman observed:

The 2020 election will obviously be distinct in all kinds of ways we can’t yet anticipate. For instance, who knows what sort of aid Russia and North Korea will give to the Trump campaign, now that he has invited them to offer their assistance?

The Trump campaign contends this was “false and defamatory” because there “has never been any statement by anyone associated with the Campaign or the administration ‘inviting’ Russia or North Korea to assist the Campaign in 2019 or beyond.”

But Waldman linked to the same Stephanopoulos interview in which Trump was asked what he would do if a foreign government—Russia, China, or another—offered him information on a political opponent. Trump replied, “It’s not an interference, they have information. I think I’d take it.” He added that “if I thought there was something wrong, I’d go, maybe, to the FBI.” Yet more boom! Waldman was right to interpret this as Trump inviting overseas regimes to send him derogatory material on his political foes. Case closed, part two.

And, by the way, both the Post articles cited by the Trump campaign appear in the opinion section, and opinion, in general, has even more protection against libel suits than news reporting. Is it a legitimate opinion that Trump, with his statement to Stephanopoulos, was essentially inviting foreign governments to intervene? Most definitely. Is it legitimate opinion that the Mueller report shows Trump’s campaign trying to conspire (or collude) with Russia? Indeed.

This lawsuit—which asks for damages in “the millions of dollars”—is not based on any real claim. The aim is to provide Trump and his campaign another red-meat talking point and another basis for a fundraising solicitation. Look how we are going after the Trump-hating media!!!! It is a cynical move that is part of Trump’s demagogical attempt to undermine the media. No self-respecting judge would allow this case to go forward. The campaign’s goal is not justice; it is to create a sort of fake news—Trump Sues The Washington Post!—to feed Trump’s base and to serve Trump’s authoritarian crusade and his dangerous demonization of the press.