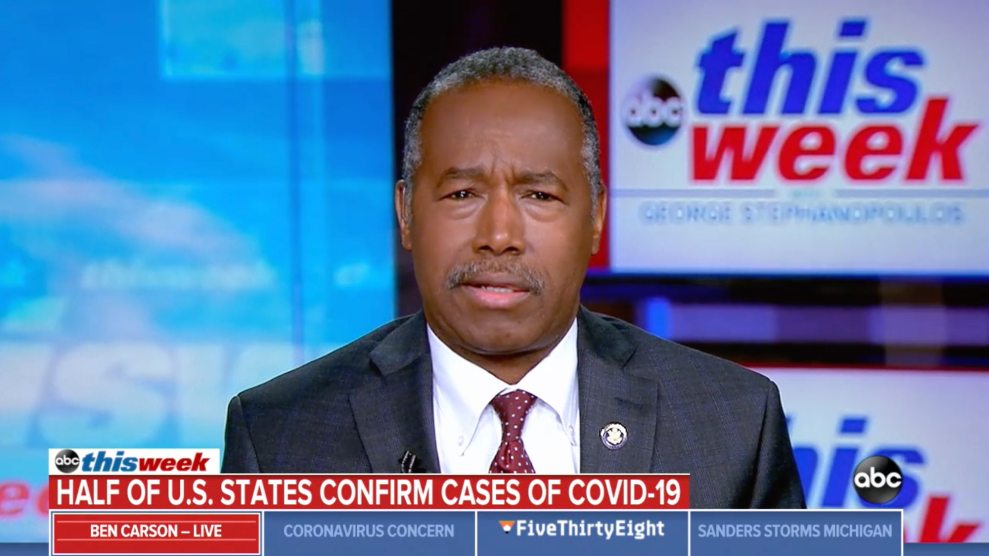 Members of President Donald Trump’s coronavirus task force fanned out on the Sunday morning talk shows to deliver a message about the administration’s handling of COVID-19—only, it’s unclear what exactly that message is. Pressed by journalists to provide numbers and a plan, Housing and Urban Development Secretary Ben Carson and Surgeon General Jerome Adams deflected and stumbled, unwilling or unable to answer basic questions about the coronavirus response.

Carson refused to reveal any information about the plan for 3,500 people aboard the Grand Princess cruise ship scheduled to dock in Oakland, California, tomorrow. Aboard are two passengers and 19 crew members who have tested positive for the coronavirus. Pressed by ABC’s George Stephanopoulos, Carson said Trump had met with the CEOs of major cruise ship companies yesterday, and that they would be coming up with a plan “within 72 hours.”

“The plan will be in place by that time, but I don’t want to preview the plan right now,” Carson said. He added that the information should come from a “solitary source,” especially when it “hasn’t been fully formulated.”

On Friday, after a tour of the Centers for Disease Control and Prevention in Atlanta, Trump said that he would leave the decision of whether to allow passengers and crew off the ship to others, but that he would “rather have them stay on, personally.” “I like the numbers being where they are,” Trump said. “I don’t need to have the numbers double because of one ship that wasn’t our fault.” Vice President Mike Pence has said that people aboard the ship who require quarantine and medical care would receive it.

Meanwhile on CNN, the surgeon general said that the coronavirus is “absolutely” spreading, urging people to wash their hands frequently, cover their coughs, avoid sick people, and stay home if they showed symptoms. He said people who are older or have medical conditions, who are most at risk for the virus, should be “extra cautious.”

But then Adams pivoted. “Speaking of being at risk, the president—he sleeps less than I do and he’s healthier than what I am,” he said. “So that’s the other reason this messaging is hard. Because there are 70 year olds who run marathons and are healthier than some 30 year olds.” (That is not the case with our 73-year-old president.)

Pressed by anchor Jake Tapper to give a rough number of how many people have been tested in the United States, Adams first deferred, saying the numbers were changing “minute by minute.” Then he referred Tapper to the CDC, which removed testing numbers from their website last week. Finally, he referenced comments by Food and Drug Administration Commissioner Stephen Hahn, who said yesterday that 5,861 specimens had been tested. The actual number of people tested is lower, because each person requires between two and 20 specimens to be tested in order to confirm the diagnosis.

Adams instead said that 75,000 tests were available right now, and “millions more” would be available by the end of the week.

“Facts over fear, Jake,” he concluded.

Surgeon General Adams can't give Tapper a straight answer (or any answer at all) about how many Americans have been tested for coronavirus pic.twitter.com/3G0mmVAUEM