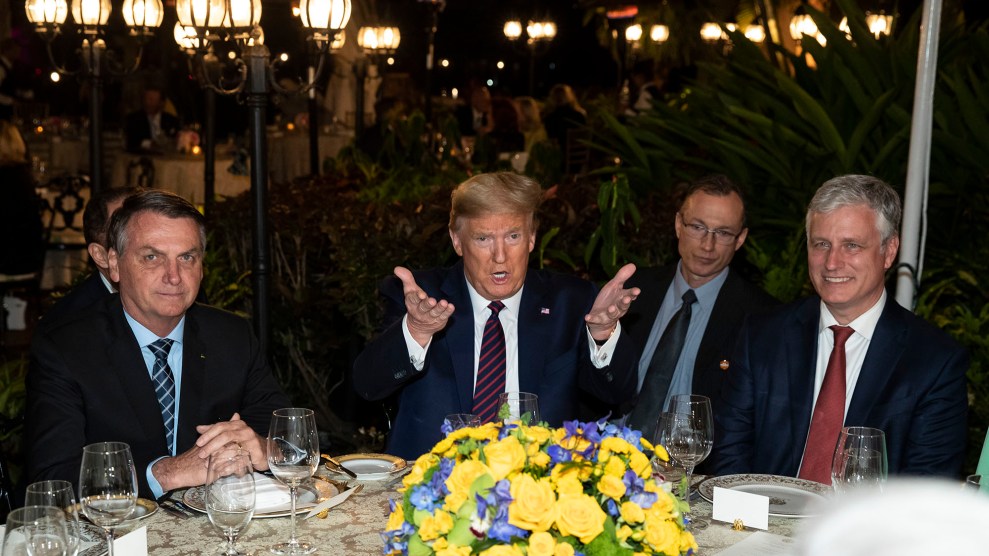 If the coronavirus spread is like a game of Battleship, nothing has hit Trump yet. But the misses are getting closer and closer.

Trump posed for a photo at Mar-a-Lago last weekend with Jair Bolsonaro, the president of Brazil, who was tested for the coronavirus but doesn’t have it, and that president’s communications director, who definitely has it. Other people close to the president have also come into contact with individuals carrying the virus: His daughter, Ivanka, and his attorney general, Bill Barr, recently met with an Australian official who tested positive. Two top allies in the House, Doug Collins (R-Ga.) and Matt Gaetz (R-Fla.), and Trump’s incoming chief of staff, Mark Meadows, were all in contact with an individual at the conservative CPAC conference who had contracted the virus. If the coronavirus spread is like a game of Battleship, nothing has hit Trump yet. But the misses are getting closer and closer.

Which raises a troubling question: If President Trump did get the virus, how would we know?

When asked on Thursday about the president’s possible exposure, White House Press Secretary Stephanie Grisham said in a statement there were so far no plans to test Trump for the virus because his contact with the Brazilian communications director had been minimal and Trump was not displaying any symptoms. “Exposures from the case are being assessed,” Grisham explained, “which will dictate next steps.”

Maybe you’d accept that kind of response from a normal administration. But Trump’s lack of transparency—and deliberate falsehoods—has made it hard to trust anything his administration says. The Washington Post documented 16,241 false statements in the president’s first three years in office, and many of those lies concerned two areas that are relevant here: his personal life, and disaster management.

Let’s start with national disasters. Last year, Trump falsely told the public that Alabama was in the path of a hurricane, and when the error was pointed out, produced a map that appeared to be doctored to try and prove Alabama was in the path. The National Oceanic and Atmospheric Administration, which had initially contradicted Trump, was subsequently forced to produce a statement supporting his version. The president downplayed the enormous death toll from Hurricane Maria in Puerto Rico, and claimed that a study showing that 3,000 people had died as a result of the storm was a hoax pushed by Democrats.

And when it comes to his own health, he’s pushed misleading information and brought out aides for Soviet-style cheerleading. In 2015, in lieu of medical records, he produced a letter from a private Manhattan doctor, Harold Bornstein, attesting to his well-being. Trump “will be the healthiest individual ever elected to the presidency,” the letter read, adding that his lab results were “astonishingly excellent.” Bornstein later confessed what anyone reading that might have inferred—that Trump himself had dictated the note.

Since then, those tasked with vouching for the president’s health have done so in such effusive terms as to diminish their credibility. Despite being obese, seeming to sleep very little, and having a lifelong revulsion toward exercise (which he believes saps humans’ finite supply of energy), Trump’s “incredibly good genes” mean he’d be perfectly fit for the rest of the term and even a second one, then–White House doctor Ronny Jackson claimed in 2017, notwithstanding the fact that the president has heart disease. On Sunday, his surgeon general, Jerome Adams, told CNN that Trump was healthier than he was.

Here's Surgeon General Jerome Adams telling Jake Tapper that President Trump "sleeps less than I do and he's healthier than what I am." 😳 pic.twitter.com/bDpQWWAgUU

Trump, who will be 74 in June, is in the at-risk demographic for the coronavirus, which is more likely to be fatal the older you are. In Hubei, China, nearly 10 percent of people in their seventies who contracted the virus have died so far—more than double the fatality rate of people in their 60s and 109 times higher than people in their twenties. And Trump, for his part, has continued to misinform the public about the current pandemic, severely downplaying the threat it posed for weeks before delivering an error-laden address to the nation on Wednesday.

This kind of situation has played out before. President Woodrow Wilson contracted the deadly Spanish flu during the 1918 epidemic. “I am feeling terribly bad,” he told his physician. His doctor told the press it was simply a cold.

At a press conference in Burlington, Vermont, on Friday, Sen. Bernie Sanders was asked if he believed the president should take a test and release the results to the public. The Democratic presidential candidate noted Trump’s exposure to the Brazilian delegation over the weekend and said he should. Trump may be fine for now, but the current moment perfectly illustrates the perils of an administration that believes honesty is optional. If you can’t tell the truth about the small things, people just might start to doubt you on the big ones.