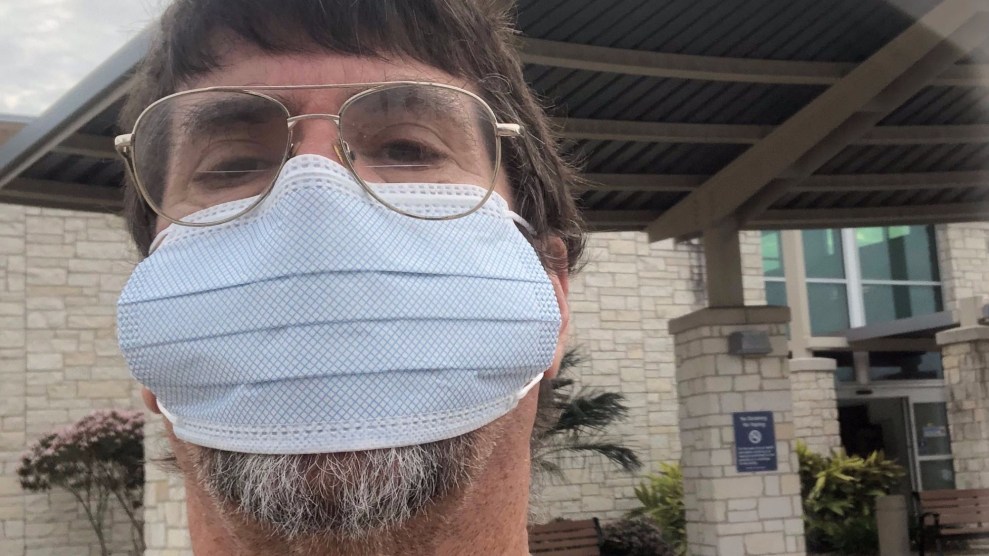 Outside a VA clinic after being sent away untested.Courtesy Jim White

The symptoms started after Jim White arrived at his friend’s house near Corpus Christi, Texas. First came the chills, followed by diarrhea and aches. White, a Coast Guard veteran and former state biologist, had been following the news and knew enough about his health to expect the worst.

“I’m almost 65 years old. I’m a disabled veteran. I have diabetes and high blood pressure,” he told me. “I’m an easy target for something like that—coronavirus.”

White had recently spent nearly two weeks working the Houston Livestock Show and Rodeo, which shut down on March 11 after an attendee tested positive for COVID-19. When White began feeling his flu-like symptoms the following week, he decided to visit the Veterans Administration’s Corpus Christi clinic. Just inside the building, he was screened by staff who asked about his symptoms and learned that he had been at the rodeo with a confirmed patient. After a brief chat, he was instructed to put on a mask, take some hand sanitizer, and self-quarantine for 14 days. No one took his temperature, and White was never tested for the virus. “It doesn’t surprise me a bit,” he said. “It’s just been my experience with the VA.”

Like nearly every other health care system in the United States, the Veterans Administration has had to reorient itself to battle coronavirus. The VA’s aging patient population—more than 45 percent of veterans are over 65 years old—infections at VA clinics and nursing homes carry a high risk, prompting severe restrictions on who can enter certain VA facilities and screenings like the one White encountered.

But such screenings are not the same as a formal COVID-19 test, and despite having access to 3,000 tests as of Tuesday, the VA has been slow to use them. By Wednesday, the VA had only tested 322 patients. When asked that day how many veterans “of those who need to be tested” had gotten one, Secretary of Veterans Affairs Robert Wilkie sounded an optimistic tune. “We believe we’ve caught most of them,” he said. In the days since that remark, the pace of testing has increased. By Friday, 1,192 veterans had been tested, according to the VA. Meanwhile, the rate of infections has shot up: 137 veterans have now tested positive, only days after the VA acknowledged just five infected patients.

Despite the considerable increase in testing, veterans like White still face obstacles to acquiring a test, primarily because of the VA’s stringent criteria for administering them, based on early Centers for Disease Control and Prevention guidelines. While the CDC recently relaxed these guidelines and now allows doctors to “use their judgment” to determine if a patient should be tested, White still didn’t receive one. A spokesperson for the South Texas Veterans Health Care System directed me to a different VA spokesperson for comment about the availability of COVID-19 test in the region. That second official did not respond.

Barriers to tests could be a growing problem for veterans, especially as local and regional governments have been slow to adopt the kind of widespread testing seen in other countries where the coronavirus has spread. Corpus Christi, known to tourists as the “shining city by the sea,” has the current distinction of being the largest municipality in the United States without a confirmed COVID-19 test. But that, rather than indicating an absence of the virus, may have more to do with a lack of tests. A drive-thru site only launched this week and it’s not clear how many residents have been tested. “Ten people gave samples for testing at the drive-thru center Sunday, and another 16 were scheduled to be tested there Thursday,” local officials told the Corpus Christi Caller Times. On Friday, a spokesperson for the Nueces County Public Health District would not confirm how many people had been tested. Only five days ago, the city’s Twitter account seemed to downplay the threat of the outbreak, by emphasizing, despite the slow pace of testing, that “there are no confirmed Coronavirus cases” in the surrounding county.

White says he called the county to inquire about getting tested, and was instead told to self-isolate for 10 days. When he asked about acquiring a thermometer, which local stores had run out of, he says he was instructed to drive to a nearby town for one. “I’m in a high risk group,” he said, explaining why he didn’t want to make the trip: “If I don’t currently have this, I don’t want to take that chance.”

On Friday, I texted White to see if he was any closer to obtaining a test, or if he’d gotten more information from the clinic. “No. No contact from the VA,” he wrote back. “The VA gives the Veteran another chance to die for his country you know. Lol.”