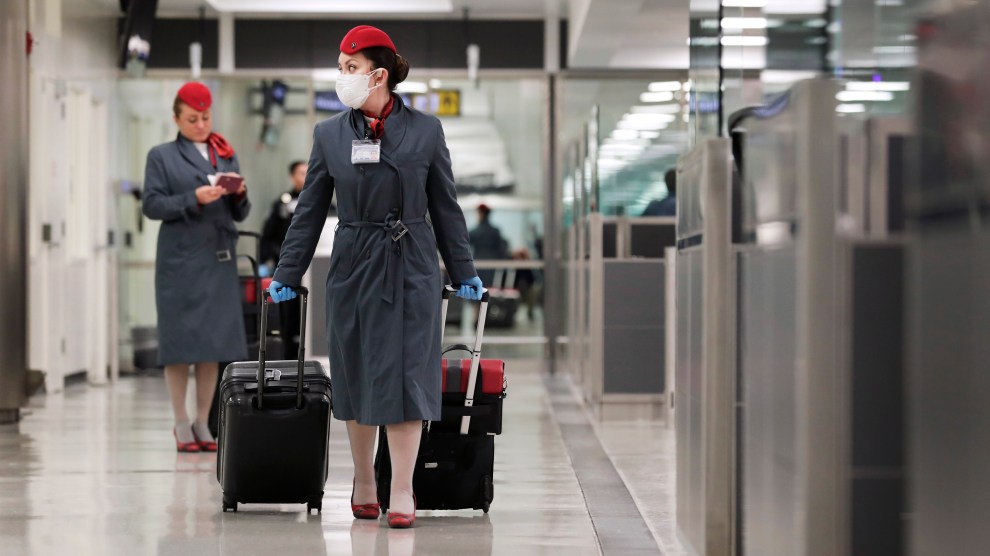 Memories of 9/11. Canceled flights. Intense fears for personal safety in the air. With the coronavirus making air travel increasingly dangerous, flight attendants say they’re faced with a set of difficulties centered around an impossible choice: stay home without pay, or imperil their health by flying.

“I run a very high risk of contracting it.”

Last week, an American Airlines flight attendant died of COVID-19. The next day, American—the world’s largest carrier by fleet size and number of passengers—announced that as of March 27, it would no longer serve meals or snacks on flights shorter than 2,200 miles and would reduce food service for longer flights. Later in the week, it announced it was suspending 60–80 percent of its domestic flights for April and May, citing “decreased customer demand and government travel restrictions related to coronavirus.” But flight attendants say the moves are too little, too late—and they are speaking out about what they believe is a severe lack of communication from the company, as well as an attendance policy that punishes employees for getting sick.

Flight attendants are at high risk for contracting the coronavirus because of their exposure to diseases and their physical proximity to others, a recent New York Times analysis showed. American Airlines flight attendants say the company hasn’t done enough to protect their health and that it failed to quickly enact social distancing measures or provide protective supplies such as hand sanitizer. (Because of a hand sanitizer shortage, the company is providing sanitizing towelettes.) One American Airlines flight attendant said the treatment of airline personnel in the past few weeks was “like sheep for slaughter.”

In interviews with Mother Jones, three flight attendants—who all requested anonymity for fear of retribution from the company—said the airline failed to take basic safety precautions, such as allowing personnel to wear face masks, until the coronavirus had already come to the United States with a vengeance.

One of the most common complaints among flight attendants was of a lack of social distancing measures onboard. One flight attendant described a March 24 flight that carried 11 people total—all crammed in the last three rows. “The reasoning behind it is, well, they bought basic economy fares, so we can’t put them further up in the cabin, because that would be an upgrade,” she explained. She said that the flight attendants “took it upon ourselves to spread them out.”

In recent days, the airline has announced some steps intended to address those issues. On March 24—the same day as the trip described by the flight attendant—the company issued a new policy stating that “gate agents may reassign seats to create more space between customers” and that “customers can move to another seat within their ticketed cabin subject to availability.” It also said that 50 percent of standard middle seats and all seats bordering flight attendant jump seats would be left empty. But even after March 24, the same flight attendant worked a flight with 15 people seated in the last six rows of the plane. No one was seated ahead of the exit row, she said, because that’s a different pricing tier.

At a time when public health experts are urging all people who can stay indoors to do so, the close contact with strangers from around the world has many flight attendants concerned for their health. “Even though there’s 11 people in a plane, there’s still 11 people that I don’t know where they came from or who they’ve been in contact with,” the worker who described the crowded back rows said. “For my own mental health, I’ve just been resolved that I’m exposed and I run a very high risk of contracting it.”

Last week, flight attendants received an email from the airline saying that they were now allowed to wear face masks when traveling—as long as they were neutral in color. “It’s insulting,” the same flight attendant said. “Let’s suppose I do go on Amazon and find a mask, but it’s in purple. Well, now you don’t want me to wear it because it’s purple and it’s not beige?”

If a flight attendant becomes sick, the airline does not offer paid leave for self-isolation unless that worker tests positive for the virus or has confirmation from a medical professional that he or she came in contact with someone who was sick with coronavirus—but, as COVID-19 overwhelms health care systems across the country, such confirmations can be hard to come by. The airline has relaxed its attendance policy, allowing people who do qualify for paid sick days to take them without accruing “points” that harm workers’ standing in the company. The company is also offering unpaid leave, but, as one flight attendant puts it, “If you don’t work, you don’t get paid.”

The new federal law mandating two weeks of paid sick leave for people who are sick, quarantined, or seeking diagnosis for the coronavirus does not apply to American Airlines because it has more than 500 employees—a glaring loophole that has received widespread criticism.

“There’s zero leadership trying to make us feel comfortable coming to work or feel comfortable that if we do decide to take it upon ourselves to self-quarantine and make sure that we’re doing okay, that we are not going to be reprimanded,” another flight attendant said.

American Airlines did not respond to specific questions about its options for sick leave or any steps it has taken to ensure social distancing onboard its planes. “The safety of our customers and team members is our top priority,” the airline said in a statement. “We are in close contact with the Centers for Disease Control and Prevention (CDC) and public health officials and are coordinating with them on any required health and safety related measures.”

Infighting in the American Airlines flight attendant union hasn’t helped matters. The union president, vice president, secretary, and treasurer reportedly announced in December that they would be stepping down at the conclusion of their terms this year. (Not all flight attendants share this sentiment: The West Coast-based worker said, “Both sides have been very communicative…and they are giving out information as soon as they get it.”) The Association of Professional Flight Attendants did not respond to repeated requests for comment.

Flight attendants also pointed to a lack of clear direction from the federal government—and an unwillingness on the part of the airline to take the initiative. “I feel like both of them, the union and the company, are sitting around waiting and seeing what our illustrious leader is going to do, instead of being proactive,” one worker said.

Looming even above the threat of getting sick is the possibility that the airline industry will not fully recover from the crisis. The company has reportedly said that it does not expect to lay off employees or reduce their pay if it receives the $12 billion bailout it’s seeking from the federal government. Still, three employees who spoke to Mother Jones compared their experiences in the past few weeks to the uncertainty they faced after the September 11, 2001, terrorist attacks, when 20,000 employees of American Airlines’ parent company lost their jobs in the week immediately following the disaster.

“Post-9/11, post-bankruptcy, our industry is really fragile,” Andrea Gladson, an American Airlines pilot, said. “I would not want to be a flight attendant, honestly. They’re just way more exposed probably than we are as pilots…and I worry about them, in that sense.”