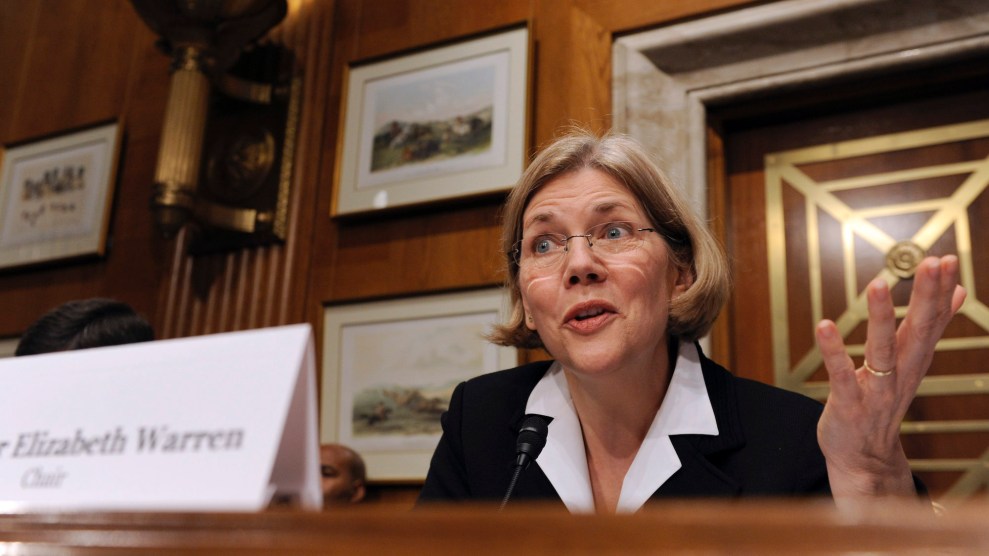 Elizabeth Warren asks a question of Treasury Secretary Timothy Geithner during a hearing on the Troubled Asset Relief Program on April 21, 2009 in Washington.Susan Walsh/AP

Before she was a senator or a presidential candidate, Elizabeth Warren’s first foray into politics began when former Senate Majority Leader Harry Reid tapped Warren to serve on a congressional panel charged with overseeing a $700 billion bank bailout during the 2008 financial crisis. It was in that role that Warren, a Harvard law professor and personal bankruptcy expert, became a hero of progressives for her dogged accountability of Wall Street.

On Monday, Senate Minority Leader Chuck Schumer announced that Bharat Ramamurti, a longtime Warren aide, would effectively serve that same role as the country stares down the barrel of a new economic crisis. Schumer appointed Ramamurti to a new panel charged with overseeing how the Trump administration uses a $500 billion emergency relief fund passed in the midst of the COVID-19 epidemic.

Ramamurti has been in Warren’s orbit since 2013, when the Yale Law-educated attorney joined her Senate staff to work on banking and economic policy. His major role in those first years was to monitor the implementation of Dodd-Frank, the massive financial reform bill passed in the wake of the Great Recession. He focused on oversight, using the tools at the Senate’s disposal—namely, hearings and confirmations of White House appointees—to police the Federal Reserve on its progress in carrying out Dodd-Frank’s regulations and to bludgeon back any agenda that could benefit Wall Street at the expense of the American consumer.

“We’re looking at a huge sum of money, and we’re in an unprecedented crisis.”

Most recently, Ramamurti served as a deputy policy director in Warren’s presidential campaign, where he helped develop the campaign’s economic policies that became foundational to Warren’s oft-cited trove of plans. Ramamurti was a key voice in creating Warren’s “two cent” wealth tax on households with assets greater than $50 million, and particularly instrumental in devising her corporate accountability agenda. That vision—which essentially pushed for companies to be accountable to workers in the same way they were to shareholders—fueled the narrative that, as president, Warren could competently rewrite the rules of the market. The agenda caught the attention of Wall Street, which painstakingly analyzed her plans to determine what she could achieve without congressional approval.

The Congressional Oversight Commission that Ramamurti will now serve on is a requirement of the $2 trillion emergency relief bill Congress passed late last month to stop the worst of the health care shortages and economic freeze caused by the pandemic. I spoke with Ramamurti soon after Schumer announced his appointment to the panel. We talked about the oversight work he did in Warren’s Senate office, how that experience prepared him for his new role, and how Warren’s structural reforms relate to oversight.

Tell me a bit about the oversight work Warren’s office took on during your time working there.

Sen. Warren figured out relatively quickly that oversight of companies and agencies is a good way to move the ball forward for working families—especially at a time when it was harder and harder to pass legislation. A lot of my work for her was oversight of agencies and companies, and the biggest ones were Wells Fargo [a fraudulent account scandal] in 2016 and Equifax [data breach] a year later. She was very active on both.

We sent letters to companies and executives, to regulators. On Wells Fargo, the Fed came down with an unprecedented punishment, which was a cap so it couldn’t grow beyond a certain size. It pushed some board members out, and [former Wells Fargo CEO] John Stumpf resigned and gave back a bunch of compensation. That wasn’t solely based on Elizabeth’s work, but some of it had to do with what we uncovered in the hearing. And in the case of Equifax, it turned out people’s passport numbers had been compromised in the breach as well, and that was something we helped to unearth in our work.

How does that experience inform your approach?

The goal oversight is to have all the information at your fingertips, whether its Equifax, Wells Fargo, or the Fed. During our work on Wells Fargo, we spent awhile digging through the earnings calls to see how executives were talking about the ratio of bank accounts to individual customers. The language they used made it clear that growing and deepening relationships with customers was a big part of their earnings agenda. It showed there was a motive for senior management to push frontline employees to keep opening accounts, and it’s what led them to create fraudulent accounts. That level of detail helps to build the case and uncover new aspects of how the issue came to be in the first place.

Ultimately, you want to be able to explain these things to the public. We’re looking at a huge sum of money [in the emergency relief bill], and we’re in an unprecedented crisis. The question we need to ask is, “What impact does that money have in the functioning of our economy?” That’s the goal of the commission.

Many of your contributions on the Warren campaign had to do with “big, structural change,” these ideas of rewriting the rules of the economy to benefit consumers over corporations. Obviously, your new role constricts you to oversight only. What relationship do you see between Warren’s ambitious economic reform agenda and the work before the Oversight Commission?

A lot of the restrictions that are being placed on companies that end up getting this money are the types of restrictions I spent time on with Sen. Warren—restrictions on stock buybacks and executive compensation, for example. It ultimately gets to the question of, “What is the corporation and what is it going to do with that money?” Is it going to be used to keep people on payroll? If not, is it being used in the short term to provide some amount of compensation? There’s a possibility for the Treasury to put limits on buybacks—is it going to do that?

Ultimately, the goal of the commission is twofold: To spell out to the public “this is how your money is being used,” and to make sure that matches up the intent of the law and stability the economy.