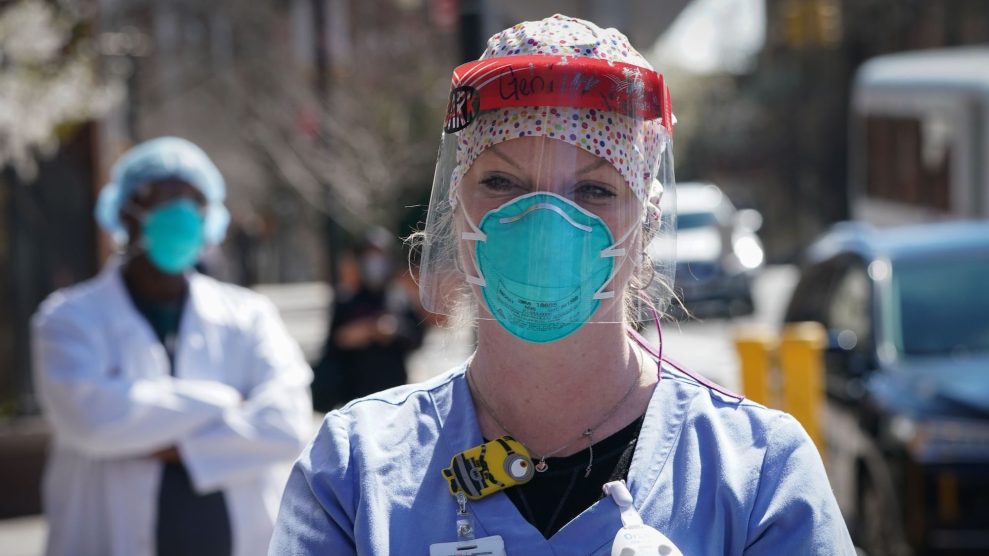 A member of the medical staff in New York.Bryan R. Smith/Getty

Three nurses allege in a new lawsuit that a Kansas-based recruiting company misled and defrauded them when it deployed them to the front lines of the national coronavirus crisis to fill roles in New York City hospitals they weren’t trained for and without adequate protective equipment to shield themselves from the deadly virus. The suit, which seeks $500,000 in damages, accuses the firm, Krucial Staffing, of breach of contract and violating labor laws. And it contends that the company placed not only its recruits but the broader public at risk through its practices.

One of the plaintiffs, who is using a pseudonym, is Wyatt Logan. After New York Gov. Andrew Cuomo warned last month that the state health care system was likely to be “overwhelmed,” Logan quit his job in an Alabama nursing home to answer the call. He was hoping to help fight the virus where it was doing the most damage: New York City. Logan made it to New York and joined the effort for a while. But after encountering a number of problems, he and two other health workers who had been recruited filed the lawsuit.

Krucial Staffing, according to its website, has brought on medical workers for short-term contracts, typically during natural disasters such as hurricanes. The company has sent thousands of medical professionals to New York and Louisiana over the past few weeks, promising as much as $13,000 a week for nurse practitioners and $10,000 a week for nurses in return for working 12-hour daily shifts during 21-day deployments. According to the suit, the company assured its recruits they would receive personal protective equipment—despite the fact that supplies of some types of PPE, including N95 masks, are days from running out in New York City hospitals—and that they would be given assignments that fit their skill sets. Neither turned out to be true, the suit contends.

“Krucial’s operation was a classic bait and switch,” the suit alleges. “There was no appropriate PPE. No plaintiffs would have done it for any money had they known they were putting their lives at risk, as well as, potentially, their families. They also wouldn’t have come had they known they would have to violated [sic] normative standards of nursing care.”

None of the three plaintiffs—neither Logan nor Alexis Allen or Latricia Hickenbottom (their real names)—have experience in ICU settings. The plaintiffs allege they were misled by Krucial and placed in critical care roles they had no experience in and never received adequate protective gear.

They all describe alarming conditions in the medical facilities where they were assigned. On March 24, Logan arrived at Coler Rehabilitation and Nursing Care Center on Roosevelt Island, which had been crisis-fitted to take COVID-19 patients. The conditions were worse than he’d imagined—and much different from what Krucial had assured him would be the case, he contends. Logan alleges that he saw the facility “putting confirmed COVID patients in rooms with patients that (a) had symptoms but were not confirmed; (b) needed hospitalization for other reasons and had no other place to go.” A staffer from the New York City Health and Hospitals Corporation, which “Krucial acted as agent of,” according to the suit, allegedly told Logan, “Your patients will not have COVID.” The suit alleges that minutes later, Logan was assigned to work with incoming COVID-19 patients, without the protective equipment promised by Krucial.

New York City Health and Hospitals Corporation did not respond to requests for comment.

“He believed there was an emergency and he didn’t feel comfortable working out of his field of competence.”

Logan alerted Krucial to his concerns, according to the lawsuit, at one point telling the staffing agency’s CEO, Brian Cleary, “He believed there was an emergency and he didn’t feel comfortable working out of his field of competence.” According to New York State labor laws, health care workers are required to alert superiors of substandard care or safety violations. The suit alleges that on the phone, Cleary shouted, “You mean to tell me you’re a freaking rehab nurse and you are not going to work with med surg! That is ridiculous! I have clinical nurses who have never set foot in a hospital and now they are working in ICU!” (Med surg nurses typically work in hospitals and care for adult patients who are ill or recovering from surgery.) Wyatt was then fired.

Cleary did not respond to questions from Mother Jones.

Hickenbottom, a nurse practitioner from Mobile, Alabama, alleges she was told by a Krucial recruiter “over the phone that nurses or NP’s [nurse practitioners] would be placed based on their specialty or in an area they are comfortable with or knowledgeable in.” According to the suit, she was sent to Harlem Hospital. After shadowing a physician there for three hours, she was assigned the role of hospitalist, which, as the suit notes, “traditionally, means a doctor who works in a hospital.” She alleges that when she raised the issue of not being qualified for this position to her supervisor from Krucial, she was offered the option to serve as a registered nurse. But the responsibilities for nurses at Harlem Hospital were also beyond the bounds of her training. “[N]urses without critical care training were working with maybe ten patients at a time, all on ventilators,” the suit says.

She was later offered a third alternative, “in a COVID overflow intensive care unit”—an assignment that came via a text message from the hospital’s chief resident, who informed recipients they “could not question assignments and must be flexible.” When she told Krucial staff members she lacked experience for the jobs offered to her, she says she was told: “There were only hospital assignments, and she would have to take one or demobilize,” the suit alleges. She decided to return home later that day.

The third plaintiff, Alexis Allen, says she was similarly offered various assignments that she was not trained for. Taking such jobs might potentially violate the Alabama Board of Nursing Administrative Code rules that could nullify her license. When Allen, a nurse practitioner who specializes in family care, arrived at the New Yorker Hotel, where Krucial was housing some of its recruits, she alleges that she expected to work as an outpatient care worker. Quickly, she discovered that nurse practitioners—despite being hired by the hundreds by Krucial—often spent days in the hotel without assignments. Hospitals weren’t in need of practitioners but of nurses trained for ICU and emergency room work. When hospital personnel from Bellevue Hospital in Midtown Manhattan asked the unassigned practitioners if they’d work as registered nurses, most “would not agree…because they were repeatedly told not to do so by Krucial,” the suit says.

The plaintiffs say they are now worried that they, along with their families, may have been exposed to the virus. According to a blog post written by their lawyer Gregory Antollino, workers contracted by Krucial weren’t screened for COVID-19 or quarantined after returning home from their assignments. “Many of the traveling nurses developed symptoms, and–without quarantining or testing them for COVID, [Krucial] sent them on packed planes where, if exposed, [they] could infect other passengers,” Antollino writes. In the suit, the plaintiffs demand “an injunction preventing Krucial from placing staff showing symptoms of COVID on airplanes without quarantine or testing.” Two other nurses, who contracted with Krucial, but are not party to the suit, told Mother Jones that they weren’t screened for COVID-19 by Krucial before beginning work.

The company promised many nurses—mostly of African American descent, most in their late 20’s/early 30’s—huge combat pay to travel to New York. It promised Personal Protection Equipment—the most important of which is the N-95 mask—and several positions to fill. They should not have made this representation, which we contend is a fraud; New York City did not have positions to fill, except for nurses willing to work in positions they were not competent to perform. This risks patients and the nurses…