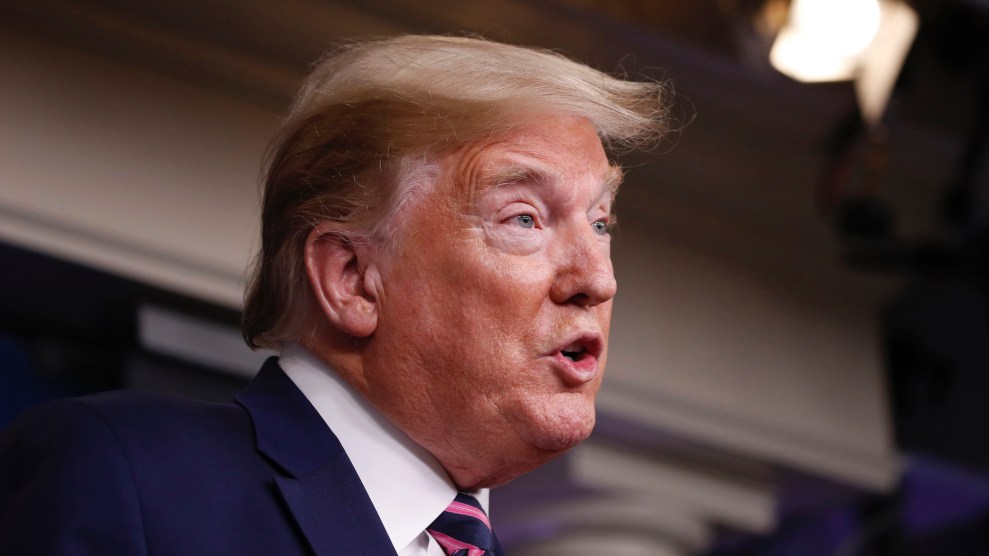 The Supreme Court issued a request Monday for more arguments in the fight over whether Donald Trump’s bank and accountant should be required to comply with congressional subpoenas for the president’s personal financial records, adding an odd new wrinkle to the fight—one in which, so far, there is no clear winner.

Since Democrats took over the House in 2018, Trump has refused to cooperate with congressional investigators seeking more information about the ins and outs of his finances. Last year, he extended the fight beyond his own personal refusal to cooperate and filed a lawsuit against two of his banks—Germany’s Deutsche Bank and Capital One—and his accounting firm, Mazars, demanding that they not comply with subpoenas asking for copies of his financial statements, including of his tax returns. Lower courts have upheld the subpoenas, but Trump appealed to the Supreme Court in December, saying that there was no legitimate legislative purpose for members of Congress to demand the documents.

On Monday, the Supreme Court issued a new ruling, asking that all of the parties in the case submit new arguments on the issue of “the political question doctrine or related justiciability principles”—a fancy way to say the Court wants to know whether this is a real legal question or just a political bickering match that doesn’t deserve a Supreme Court decision. It was an odd request, and not one that had been widely expected—and it’s not clear exactly how it would play out. The Court may well determine that it is not a political question and that it can go on to address the president’s appeal. But if the court does decide to step back—and among the early reactions to the latest ruling, some have suggested that the Court is looking for a way out of having to answer the question—it might not be great for Trump.

For starters, Trump is the one arguing that the Supreme Court step in to help him. If it backs away from this case, it means the Court is refusing to interfere with the Congressional subpoeanas. Also, the banks being targeted by congressional investigators have indicated they will comply with legal subpoenas; a spokesman for Deutsche Bank reaffirmed Monday that “we remain committed to cooperating with authorized investigations.”

Steve Vladeck, a constitutional law professor at the University of Texas–Austin law school, says that if the Court opts out of this question, it clears the way for the banks and Mazar to comply—but it might also set a bad precedent for Congress’ future ability to subpoena anyone who is not as willing to respond to an investigating committee’s subpoeana:

I don't think there's any obstacle to #SCOTUS reaching the merits of these cases. But if the Court says that there is, that's actually bad for *Trump*—as he's the one who's suing to try to block Mazars/Deutsche Bank from *voluntarily* complying with these congressional subpoenas. https://t.co/F2QO2l4YJx