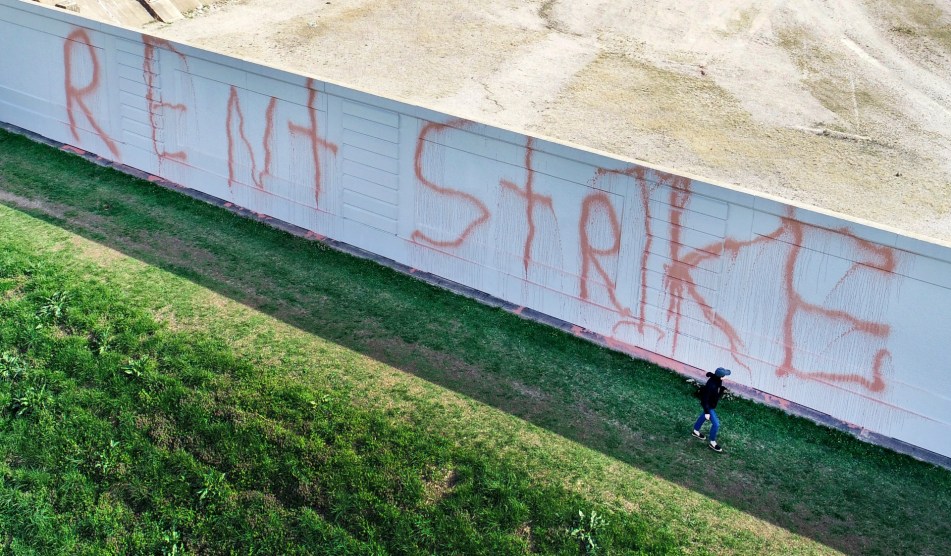 How do you have a mass revolt without a mob?

Prof. Frances Fox Piven is the 87-year-old “intellectual guru of activist progressives”—so sayeth the New York Times. Her work, she explained to me, is about “uprisings that sometimes occur when there’s what people call a ‘crisis,’ when familiarities of everyday life are knocked askew.” Now, with millions of Americans refusing to pay rent and “essential” workers striking because of the coronavirus and its economic reverberations, her work is more relevant than ever. The crisis is here; the familiarities have been knocked askew. So how does an uprising come about when we cannot meet in the streets?

Piven is holed up in a cabin 100 miles north of her New York City apartment, where she spends her time gardening and writing. I spoke to her about what a mass movement could look like in a moment when the masses are scarcely free to move.

How do you think your work on crisis and uprising speaks to the ability to use this emergency for demand changes?

Two points, I think, are important. One is that usually when we think of collective action, of mass movements, we think of people getting together physically. We think of marchers and crowds and mobs. And that’s exactly what people are afraid to do now—rightfully, reasonably.

But the essences of these uprisings is not the physical gathering of people—that’s what happens because in a way the movement is nourishing itself. That’s what people do to identify who they’re with and who they’re allies with, how big they are, how strong they are. That’s an organizing strategy: the crowd, the mob, the march. What really is important in yielding gains, concessions, victories are transformations—the movement’s ability to interrupt, to shut down, to strike, to make institutional life impossible. In order to do that, they have to enhance their own morale, their own sense of who they are, their own sense of their power. But it’s the strike action—the refusal—that’s important about movements.

Nothing about the coronavirus interferes with that capacity, I don’t think. People can still shut things down.

Do you think a rent strike is truly possible right now?

I think it is possible. In the first place, people don’t have cash. So it’s a kind of natural solution to their immediate dilemma. In the second place, it is clearly a national emergency—or an international emergency. People acquire a kind of morale and courage when they see their own individual troubles as part of something bigger than them, and see the cause as having to do not with themselves and their own failure to plan ahead or whatever, but as having to do with the system. That’s what happened in the Great Depression. That’s why we got the mass strikes, the sit-down strikes, which were probably the most effective tactic ever in American history. It was because people knew it was not their fault.

One of the reasons I like rent strike is that it clearly targets real estate and all the people who bought up the mortgages of homes of people who couldn’t pay their mortgages in 2008 economic recession. So I don’t expect strikes by nurses or other health care workers, and I wouldn’t encourage that kind of strike. But there are a lot of other kinds of strikes, or other kinds of refusal, that target those who are benefiting from the pandemic. A lot of rich people are benefiting from the pandemic. And look at the way in which the Trump administration’s interventions to ease the economic blow caused by the pandemic is favoring airline companies, for example. Or favoring investors. Instead of favoring the people who can’t go to work, or who have big health care costs, or whatever.

You’ve written before that people often criticize movements instead of situating them into a moment in history. Can you explain that more?

We have a tendency, I think, to criticize movements for not making enough demands or not foreseeing the way in which their particular and specific demands mesh with the continuity of the society or the society’s institutions. But the movement doesn’t do the whole thing. It’s also the question of just what is possible in the United States.

But there are other kinds of refusal that could advance the demands of, for example, the Sanders campaign or the Warren campaign. Think for example about the many people who are affected by health care costs—which obviously now are not the result of somebody not taking care of their health or not quitting smoking or something like that. These health care costs are the result of a pandemic. And under those conditions, I think people could refuse to pay for those health care costs and create a kind of institutional crisis that would lend momentum to a national health insurance or a different national health system reform.

I guess that leads back to the basic question of how you have a mass revolt when you can’t be in the streets.

I was thinking, for example, of a time in the 1960s when there was a kind of rash of window breaking of schools in New York City. It was like a kind of epidemic. Now, none of that was accompanied by mass demands, mob actions. It was things that school children did individually. But they probably did them individually with a sense that they were part of a larger crowd action in a sense. I do think that it is incumbent that we can’t do crowd actions in the classical manner. But I also think that there are other ways in which people can establish their collective identity and their collective demands—and especially over the internet and social media.

That refusal to cooperate that you’ve spoken about as essential for workers—you’re saying that doesn’t have to be a typical march or crowd action.

I think that the great untapped reservoir of power—leverage—that ordinary people have is always their ability to refuse to cooperate. Because society is a system of cooperation. That’s what economies are, too. And this kind of power, or influence, is not usually exercised. People go along. They like normal life. They prefer normal life to the anxiety provoked by what is abnormal or disorderly. But this is such a period of change and crisis, where the future of American society—of the planet—is at stake. I think it’s a time that people would be ready to act on this tacit power that they have to simply refuse to play their normal role in economic relations, in family relations, in community relations, and in political relations. And that happens from time to time. That’s when we get our movement moments.

I think everybody has a sense that this is a kind of world-transforming crisis and that we may not recover from it. Also, that the normal pillars of responsibility and authority and wisdom in our society are not functioning. All of this encourages people to search those aspects of their own history which reveal this power to shut things down. And force action from the top, by creating a kind of mass strike, of one kind or another. You know, everybody can strike; it’s not just workers.