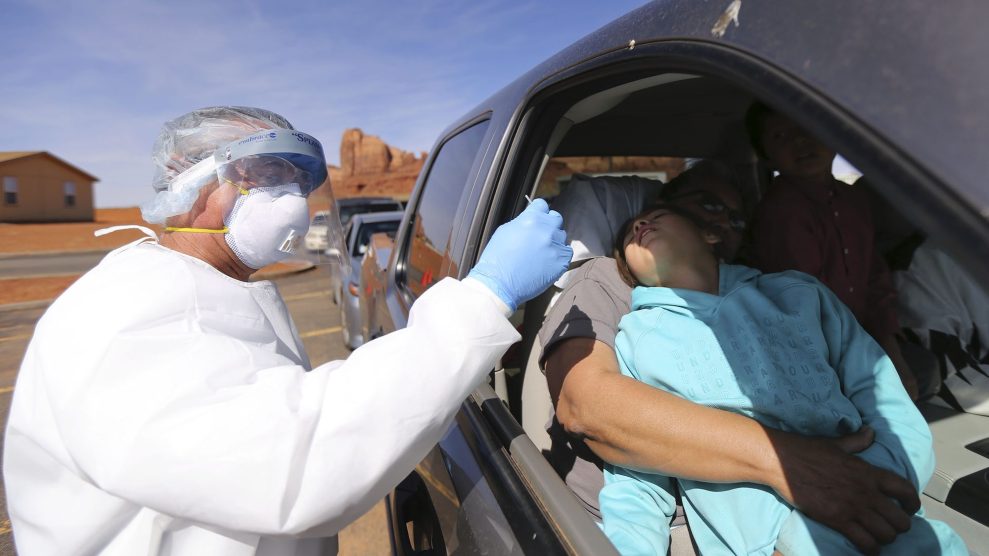 Vehicles line up for COVID-19 testing in The Navajo Nation, which has one of the highest per capita COVID-19 infection rates in the country.Kristin Murphy/AP

Lucinda Charleston’s children reminded her that she wasn’t young anymore. But despite their worry, she assembled an emergency public health team to tackle the Navajo Nation’s first coronavirus outbreak. The pandemic hit Chilchinbeto, a small town in the northeastern corner of Arizona, in mid-March. As deputy commander for the Navajo Nation Incident Command Center, Charleston was tasked with delivering aid, isolating the community and tracking the sick and vulnerable. During those weeks, Charleston (Diné) had one recurring thought: “I’m not the only person that has family. Everybody on my team, we all have families that we need to go home to.”

The novel coronavirus has ravaged much of the world, yet its impact has been particularly acute on the Navajo Nation, where it is pushing the tribe’s public health system to its limits. Decades of negligence and billions of dollars in unmet need from the federal government have left tribal nations without basic infrastructure like running water and sewage systems, along with sparse internet access and an underfunded Indian Health Service. All this compounds the life-threatening danger the virus poses to the elderly and immunocompromised. Front-line workers endure shortages of protective equipment like masks and gloves to help communities with already-dire health disparities, including high rates of chronic illness and lower life expectancy. In response, relief efforts have sprouted to gather and deliver food, water, cleaning supplies and other goods—all jobs the federal government is treaty-obligated to do.

“Yes, we were afraid. But there are some people who run away from fire and some who run towards fire.”

Chilchinbeto’s chapter house, church, school and its over 400 housing units are nestled beside a modest mesa. Charleston and her team drove through town, making an initial field assessment for their difficult mission—delivering aid and isolating the community. For the next three weeks, the team would live in the hospital in Kayenta, just over 20 miles north of the unfolding outbreak. Charleston found refuge in Room 118, away from her family, emerging each day to face the virus.

“Yes, we were afraid,” Charleston told me over the phone in mid-April. “But there are some people who run away from fire and some who run towards fire.”

As is true elsewhere, health officials suspect the outbreak was amplified by a “superspreader” event: a rally hosted by the evangelical Church of Nazarene in Chilchinbeto and attended by people from all over the Navajo Nation. From Singapore to the United States, churches have been linked to outbreaks of COVID-19. In France, a five-day church event exploded into around 2,500 cases. In April, the Pew Research Center found that stay-at-home directives in 15 states had religious exemptions. Six of them were Western states, including Arizona.

Charleston faced a daunting task. She wasn’t familiar with Chilchinbeto, and yet she had to reach as many people as possible as soon as possible, keep them in isolation and deliver aid—all without knocking on doors. She and her team decided the safest method was to call each household and have a member pick up food and supplies at the chapter house, one at a time, maintaining a zero-contact policy. The town’s officials and community health representatives, or CHRs, would prove invaluable.

The more than 140 CHRs monitor the health of community members and visit and assess the elderly, many of whom speak only Navajo, delivering medication and making hospital referrals. Many of their clients have chronic illnesses. “There are some anxieties within them (CHRs), because we don’t have all of the necessary personal protection equipment. But they know that they have to get out into the community,” Mae-Gilene Begay (Diné), the tribe’s CHR program director, said. “I have some CHRs that had to go into the self-quarantine for a week, but they got called back, so they returned to work.” Because of the coronavirus, home visits have become impossible, and long hours are inevitable.

Shortly after the church rally but before the outbreak was apparent, Begay went to a Navajo chapter meeting in Chilchinbeto. She was lucky, she said. She kept her distance, didn’t shake hands. Less than a week later, one COVID-19 case had become 26, and it wasn’t long before people were dying. Today, the disease has impacted every corner of the Navajo Nation. According to CNN, as of May 18, the tribe’s infection rate has surpassed that of New York and New Jersey, previously known as the US “epicenter” of the pandemic. On May 17, the Navajo Nation Department of Health documented 4,002 confirmed cases of COVID-19 and 140 deaths.

Owing to the shortage of hospitals, respirators and trauma care, it can be difficult to find out where loved ones are receiving treatment. One of Begay’s relatives, who went to the Nazarene church rally and returned home to Hardrock, died from COVID-19. “Right now, I have an aunt and uncle that are in the hospital,” Begay said in mid-April. “They flew out my aunt two days ago, and we don’t know which hospital she’s at, and we don’t know how she’s doing. But we were able to find out where my uncle is.”

Larissa Martin (Diné), who has worked as a CHR for six years, worries that people are falling through the cracks and not getting the care and support they need. “We know who our elders are, especially those who don’t have family support or limited support, those who have fixed income,” Martin said. Many of the families and elderly that she oversees on the east side of the reservation, in Chichiltah and Bááhááli, lack internet access, telephones and adequate cleaning supplies, as well as coal for heat or even enough food and water.

“I wish we would be able to provide transportation,” Begay told me. “We do realize there is a lot of urgent transportation need, but we don’t have the proper PPE. We are very short on cleaning supplies and we don’t have enough masks and gloves to clean the vehicles.”

“We already had a first round of food deliveries, but they are going to be hungry again in a week or two.”

While tribes waited nearly six weeks for a limited, 60 percent distribution of the CARES Act $8 billion relief package, online fundraising campaigns sprang up around Indian Country to address immediate needs. The Navajo and Hopi Families COVID-19 Relief Fund, created by former Navajo Nation Attorney General Ethel Branch in mid-March, has raised over $3.8 million dollars to purchase bulk food and supplies—about $10,000 per community. The CHRs deliver the goods. “It seems like a lot of money, but it’s really not,” Cassandra Begay (Diné), a spokesperson for the Fund, said in mid-April. “We already had a first round of food deliveries, but they are going to be hungry again in a week or two.” US Sen. Tom Udall, D-N.M., called the federal relief package “too little, too late” and demanded full release of funds to tribes in early May.

For decades, tribes, advocates and a handful of lawmakers have been calling attention to the drastic underfunding of the Indian Health Service and Indian Country’s lack of infrastructure. In 2003 and in 2018, the US Civil Rights Commission found that tribal infrastructure was chronically underfunded by billions of dollars. Since virus prevention requires access to information, electricity, running water, cleaning supplies, food and medical care, many Navajos are already at a disadvantage.

Charleston and her team employed public health and health care providers to learn who was sick or being treated for COVID-19 at the Kayenta Health Center, keeping everyone safely isolated. She had to establish communications between Indian Health Service medical staff and the Navajo Nation’s Incident Command Team, sharing COVID-19 information while maintaining patient confidentiality in order to track medical conditions. They came up with ingenious solutions: repurposing raincoats for PPE, for example. They scoured the reservation in search of janitorial supplies for the constant sanitation required. But the lack of infrastructure just made everything even more overwhelming.

Charleston returned home in April, three weeks after deploying, with her whole team safe. The Navajo Nation is currently facing scores of new coronavirus cases a day, but Charleston has not lost hope. “We can outlive this virus,” she said. “But we have to look at each step to be more creative.”