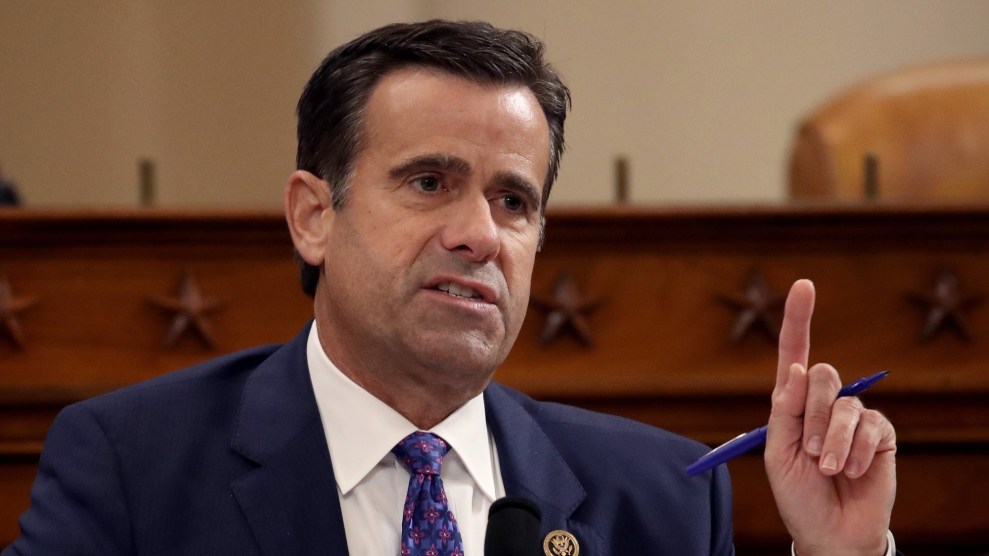 Rep. John Ratcliffe (R-Texas) might be President Trump’s pick to lead the nation’s intelligence agencies, but that doesn’t mean he’s guaranteed support from skeptical Senate Republicans. During a confirmation hearing on Tuesday, Ratcliffe strenuously, if not always successfully, tried to distance himself from his persona as a Trump lackey and instead begin to portray himself as an impartial arbiter, one who, at least to get confirmed by the Senate, would be willing to rebuke the worst aspects of the president’s paranoia about the intelligence community as a “deep state” that is out to get him.

“I won’t shade intelligence for anyone, whether we’re talking about the president, members of Congress, any policymakers,” Ratcliffe told members of the Republican-led Senate Intelligence Committee, which held a hearing to debate his nomination. “My loyalty is to the Constitution and the rule of law and I’ve made that clear to everyone, including the president.”

Ratcliffe, who gained notoriety in Congress as a rabid Trump defender during the impeachment inquiry, was initially tapped to oversee the intelligence community in July, but withdrew his nomination after five days. He had been heavily criticized by Democrats and moderate Republicans alike for exaggerating aspects of his resume and lacking the traditional qualifications for the post. As a former US attorney and small-town mayor in Texas, Ratcliffe would be the least qualified director of national intelligence since the creation of the position after 9/11.

Trump revived his nomination in February, hoping this time around the firebrand lawmaker would be more amenable to Senate Republicans. Even if that proves to be the case, Senate Democrats don’t appear any more likely to accept Ratcliffe. In his opening statement, committee vice-chairman Mark Warner (D-Va.) told him, “I don’t see what has changed since last summer when the president decided not to proceed with your nomination over concerns about your inexperience, partisanship, and past statements that seemed to embellish your record.”

With such criticism in mind, Ratcliffe spoke glowingly of his preference for an apolitical role, but struggled to meaningfully distance himself from Trump. When asked whether he agreed with Trump’s view that the intelligence community had “run amok,” Ratcliffe demurred, saying, “I have never said that.” Sen. Michael Bennet (D-Co.) asked later in the hearing about how Ratcliffe would respond if Trump made those same comments again. Ratcliffe specified that he did not agree with Trump’s assessment, but would not say whether he would publicly rebuke Trump over it. “I will give the president my best intelligence, unvarnished,” he said. Ratcliffe could only cite one example of a policy disagreement between Trump and him: the unexpected partial withdrawal of US troops from Syria last year.

As a lawmaker, he was one of Trump’s most passionate defenders during former special counsel Robert Mueller’s probe into Russian election meddling, often floating misleading arguments to validate Trump’s position. Weeks after Mueller released the report that concluded his investigation, Ratcliffe suggested in a tweet that Mueller was biased against Trump because he had previously interviewed to be his FBI director, echoing comments from Trump that have since been disputed. Mueller later told Congress that he met with Trump to give advice about the job search, but “not as a candidate.”

Ratcliffe tried to leave these partisan battles in the past during his congressional testimony, telling Sen. Martin Heinrich (D-N.M.) at one point that he did not know what the phrase “deep state” even means. “I don’t know what that is,” he said, despite Trump and his allies repeatedly using the term to criticize career intelligence staff.

Since his acquittal in the Senate impeachment trial, Trump has substantially overhauled the intelligence community, replacing the acting national intelligence director with Richard Grenell, a Trump loyalist and diplomat, and ousting the inspector general who provided Congress with a copy of the whistleblower complaint central to the impeachment inquiry. Ratcliffe broke with his Republican colleagues in defending the right for whistleblowers to remain anonymous, but left room for possible exceptions. “Whistleblowers are entitled to anonymity under the law,” he said, provoking some criticism from Sen. Ron Wyden (D-Oregon), who wondered aloud if Ratcliffe was defining whistleblowing in a more narrow, legal sense.

He described the threat of Russian election meddling, which Trump has long dismissed, with a similar caveat. Russia interfered in 2016 and 2018 with plans to continue in 2020, he conceded, but in an elision sure to please Trump, added, “they have not been successful in changing votes or the outcome of any election.”

Whether Ratcliffe will gain the support needed to win confirmation is still unclear. Moderates like Sen. Susan Collins (R-Maine) will be important, especially given Collins’ role as one of the architects of the director of national intelligence position in the first place. She’s given few signs so far of how she plans to vote, telling reporters in March, “As the author of the 2004 law that created the director of national intelligence position, I obviously am very concerned about who the nominee is, the qualifications and the commitment to overseeing the intelligence community in order to provide the best-quality intelligence.”

While Ratcliffe largely paid lip service to the importance of remaining nonpartisan and not politicizing intelligence to Trump’s liking, some of his answers left doubt that he will be able to meaningfully oppose Trump when necessary.

Sen. Kamala Harris (D-Calif.) asked Ratcliffe in one telling exchange if he believed Trump accurately “conveyed the severity of the pandemic” to the American people. Despite multiple reports that Trump downplayed the importance of the coronavirus threat in several early intelligence briefings, Ratcliffe didn’t take the bait.