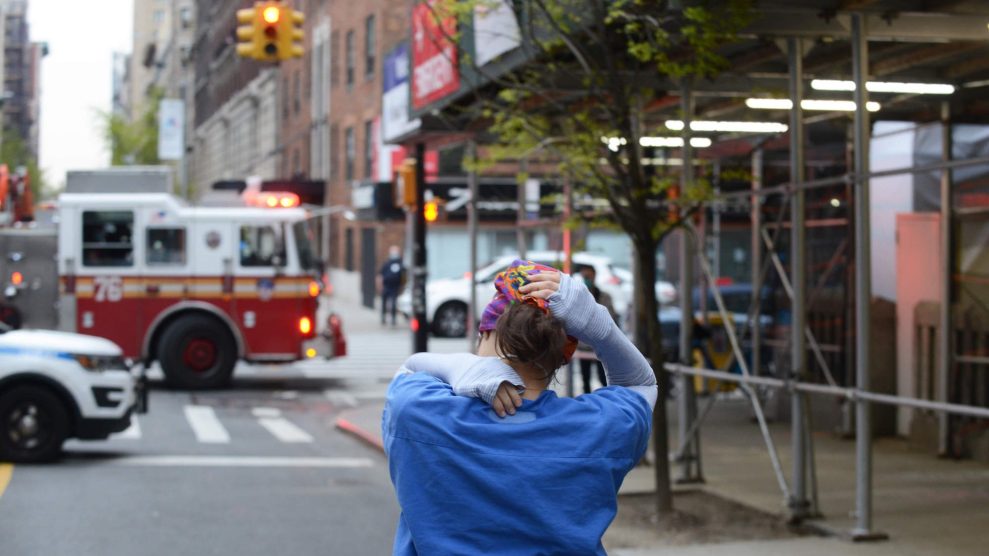 The meetings start with the ring of a bell, then breathing exercises. After that, faculty, nurses, and nursing students from Columbia University’s nursing school exchange stories from their experiences as part of the COVID-19 response, serving in hospitals at the epicenter of the outbreak. One nursing student describes being with another student at the bed of a man who dies in front of them—with no nurses available to begin the post-mortality procedures. The students offered their respects, then gently removed tubes from the body.

No one spoke for a while after the story ended. Then other members of the group began to describe what they’d witnessed on their own shifts.

“You hear the stories of the frustration, sadness, and anger at the senselessness,” says Jennifer Dohrn, a professor of nursing and the assistant dean of Global Initiatives at Columbia University Irving Medical Center, “but also see resiliency and really deepened commitment.” Usually meetings this intimate would be held in person, but in the era of social distancing, Dohrn has created nearly a dozen Circle of Care support groups online through Zoom. They meet weekly and most have between 10 and 20 participants.

As the coronavirus spread into New York City and began to directly affect the medical personnel, Dohrn and Lorraine Frazier, the nursing school’s dean, saw the need for a new program for the institution’s nurses, faculty, and students who were working to treat the spread. Circle of Care adds to existing mental health resources—Dohrn calls it “one tool in the toolkit”—that Columbia offers health workers should the emotional demands of their work begin to wear them down. “It’s not a support group,” she says, but a space where “there’s lots of silence, tears, and it’s a moment to just gather your feelings.”

The meetings can help participants in the short-term but also over time, potentially, in preventing some suffering after the crisis passes. When days are dominated by adrenaline, trauma often becomes suppressed. “But what happens as you have time to remember the rest of our lives?” Dohrn asks. “All that stuff starts to churn in you, what you witnessed. This is a release valve.”

Across the country, various sectors of the health care industry are rolling out new programs to meet a growing health concern during the pandemic: the emotional well-being of health practitioners. “The crisis has accelerated the visibility of cracks in the healthcare system,” says Dr. Dan Weberg, the head of clinical innovation at Trusted Health, a tech company that connects traveling nurses with employer health care systems.

In mid-April, when there were 650,000 confirmed coronavirus cases in the US, Trusted Health sent out a survey to nurses they had deployed, in an attempt to take a snapshot of the mental well-being within their community of health workers. During crisis situations, travel personnel often serve as reinforcements to bolster strained medical institutions—65 percent of Trusted’s 1,425 respondents were working with COVID-19 patients firsthand.

The responses concerned its developers. “Nurses feel really unsupported in this [crisis],” Weberg says. More than 80 percent of respondents reported being worried they would contract the disease, and the report underscored their concerns about personal protective equipment shortages. “[F]rontline nurses find themselves delivering care for a high volume of acutely ill patients, often in situations with limited…supplies of personal protective equipment (PPE),” it reads. The survey also revealed a 30 percent decline in participants’ emotional states, asking respondents to rate their general well-being, and measure it against their perceived well-being before COVID-19. Another 63 percent of respondents said that the health care industry at large doesn’t take the mental health of nurses seriously.

“Nurses don’t feel that their health and well-being are prioritized by the system they work for,” Weberg says.

The methodology of the survey has led to some criticism of its findings. “We don’t know what percentage responded to the survey,” Andrew Kuller, a clinical psychologist and Harvard Medical School instructor, says. “That’s a real limitation, that’s sample bias.” Kuller notes that a full assessment of the mental status of nurses would require recurrent measurements of mental health, rather than a single data point in emergency. A possible discrepancy could exist between respondents estimating their psychological states before COVID-19 and those measuring it at that time. Nonetheless, he says, “There’s no doubt that nurses are feeling more stressed out now.”

The implications of a health worker’s mental state extends beyond the individual. In 2017, the Journal of Occupational and Environmental Medicine published a study gauging the mental health status of nurses at the time. The results drew a strong correlation between the psychological well-being of nurses and the occurrence of medical errors in clinical situations. More than half of the 1,790 clinical practices surveyed reported “sub-optimal physical and mental health…those with worse health were associated with 26% to 71% higher likelihood of having medical errors.” The year before, the British Medical Journal suggested that errors in the US medical system could result in up to 250,000 annual deaths.

One of the JOEM authors, Bernadette Melnyk, the dean of Ohio State University’s College of Nursing, is trying to address that concern in the COVID-19 era in tandem with Trusted. The two organizations announced a partnership to support the hundreds of working nurses contracted through its service with the help of OSU resources. According to Melnyk, that support comes in two forms: a hotline staffed by 17 OSU faculty members to provide immediate assistance for “nurses who really need some help with coping and staying well during the pandemic,” and a “wellness partner support program,” planned to be rolled out on May 18. In the partner program, up to 1,000 nurses will be matched with one of 250 OSU nurse practitioner students. Over four to eight weeks, the OSU students, who have been trained to provide cognitive behavior therapy—which consists of stress management coaching—will be supervised by professionals as they assist front-line nurses through their experiences, via telehealth. “Our intention is to become a national wellness hub [for nurses],” Melnyk says.

At UC Davis, the psychology department has created what it describes as an early warning system for staff. The university hospital hasn’t seen a major COVID-19 surge, but the school is sending out regular anonymous surveys to monitor the general status of its medical workers. According to Angela Drake, a clinical neuropsychologist at the school, the data is used to determine which resources should be scaled up or down. “The survey results have been coming up with anxiety,” she says. “So the plan is to roll out some specific anxiety management interventions for staff.”

California hasn’t seen the pandemic crash the health care systems to the same extent as New York City, and it is uncertain what the trajectory of the disease and the demands on workers will be. “Do we make this a permanent program?” Drake asks. The answer isn’t clear.

I asked Melnyk and Dohrn why, if this issue is so serious, it has had such a hard time becoming a priority in heath care, especially when the consequences play out within the field itself. Melnyk suggests that health care workers often “don’t prioritize their self care because they’re such givers. So they let their own health kind of suffer for everybody else’s.” Meanwhile, there exists a misconception outside of health care, Dohrn says, that “we’re supposed to know good health. People look at that as a contradiction: ‘You’re in this field, so everyone is healthy.'”