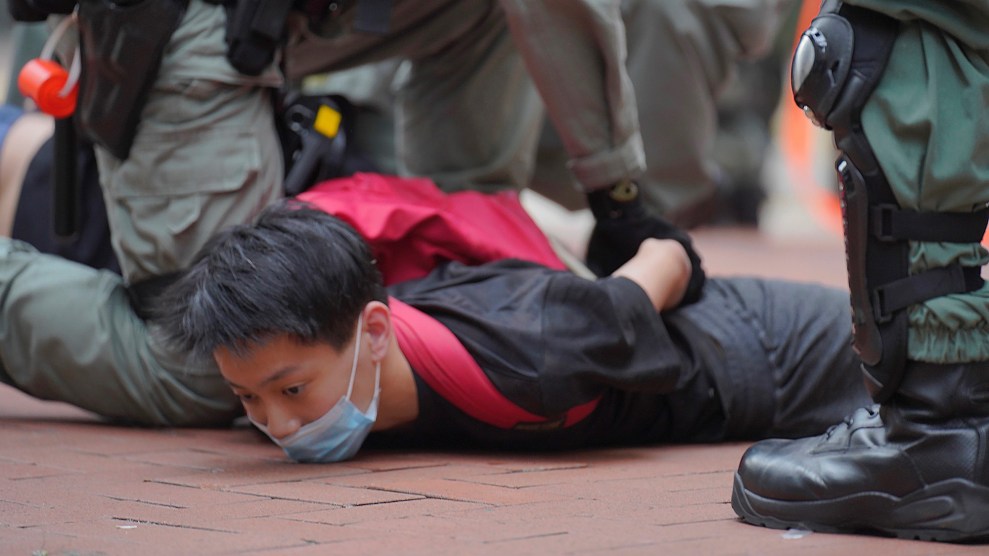 A protester was detained by riot police during a demonstration against Beijing's national security legislation in Hong Kong on Sunday. Police fired volleys of tear gas in a popular shopping district as hundreds took to the streets.Vincent Yu/AP

Pro-democracy protests in Hong Kong turned violent this weekend as large crowds returned to the streets after months of relative calm during the COVID-19 crisis. The latest round comes in the wake of attempts by the mainland Chinese government to push through new security rules for the semi-autonomous region—and wield an increasingly strong hand in repressing dissent.

The implementation of new security laws has been condemned by the U.S. as violating the long-standing agreement to allow the former British territory an unusual amount of political and press freedom, but Chinese president Xi Jinping is thought to be using China’s emergence from the pandemic as an opportunity to reassert control as other countries remain embroiled in fighting the virus. White House National Security Adviser Robert O’Brien said on Sunday that China risks U.S. sanctions over the new laws.

Large street protests and clashes between pro-democracy student groups and the police were a constant feature of late 2019, but almost entirely stopped when COVID-19 spread to the densely-packed city. Protesters reemerged this week after proposed new security initiatives were introduced as part of Communist Party meetings in Beijing. Overnight, the protests took a particularly violent turn with police firing tear gas and water cannons at the large crowds.

Here is a vivid sampling of photos and videos showing how the protests unfolded:

Hong Kong people on streets once again, fighting against the clampdown of Communist China. #StandWithHongKong #nationalsecuritylaw

(AFP) Police fired tear gas and water cannon at thousands of Hong Kong pro-democracy protesters who gathered Sunday against a controversial security law proposed by China, in the most intense clashes for months.https://t.co/JERb7c4xaf pic.twitter.com/pmDBjzTpjc

Police fire tear gas at Hong Kong pro-democracy protesters opposed to a controversial security law proposed by China last week which is expected to ban treason, subversion and sedition as Beijing warns it will not tolerate dissent https://t.co/V21a7ZZL7q pic.twitter.com/V78t0GXvux

▶️Police fired tear gas at a major district of Hong Kong in an attempt to disperse the thousands of protesters demonstrating against China's proposed security bill which could threaten freedom in the city.https://t.co/BD1zQhhbqw pic.twitter.com/bBIc6YBDtO