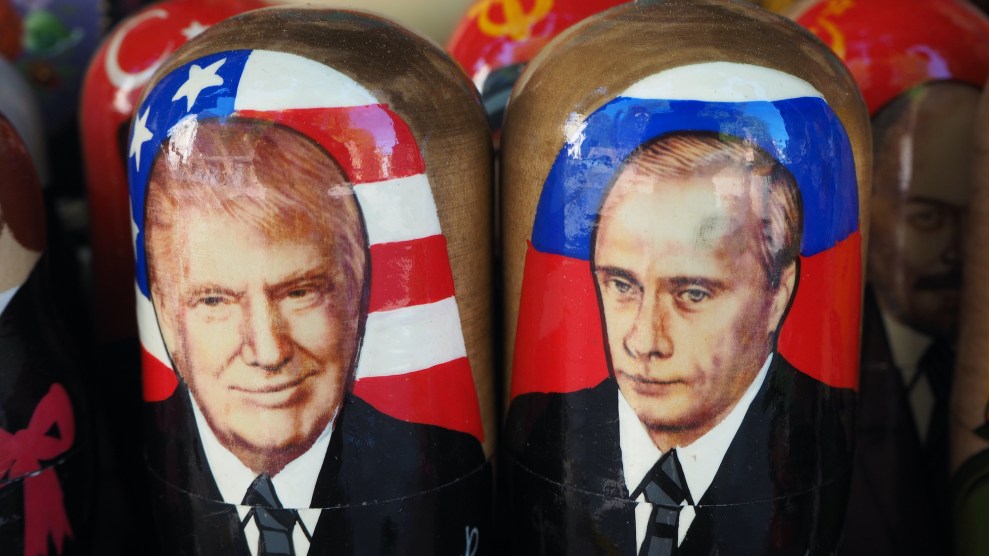 Russian nesting dolls bearing the faces of Russian President Vladimir Putin and US President Donald Trump on display in a souvenir shop in St. Petersburg, Russia, on May 31, 2020. Sergey Nikolaev/ZUMA

In the wake of the bombshell story that President Trump failed to act on intelligence that Russia had offered to pay Afghan militants to kill American soldiers, the nation once again confronts a crucial question: Why does Trump have such an affinity for Vladimir Putin, the tyrannical leader of Russia?

There’s one obvious potential answer: Trump is grateful for the assistance he received in 2016 from Putin, who ordered a multi-front covert attack on the presidential election that year that was designed in part to help Trump win. And according to top Trump administration intelligence officials, the Kremlin is at it again, attempting to interfere in the 2020 campaign—an action that Trump has not publicly acknowledged or taken measures to thwart.

But Trump’s fondness for Putin began years before Putin helped this reality TV star reach the White House. In June 2013, after announcing that his Miss Universe pageant would be held that year in Moscow, Trump tweeted, “Do you think Putin will be going to The Miss Universe Pageant in November in Moscow – if so, will he become my new best friend?”

That was an odd message to send. Putin’s thuggishness was no secret. A former KGB official, Putin was in the midst of overseeing a crackdown on dissent within Russia. (In part, this was a response to the widespread protests that exploded in response to corrupt elections held in late 2011.) The country had also adopted vicious anti-gay laws. A few years earlier, Putin had managed a brutal war in Chechnya that resulted in 25,000 dead civilians. And during his tenure, a series of Russian journalists had been murdered. The record was clear by the spring of 2013: Putin was a violent authoritarian. (Through all the years of his tweeting, Trump has not once referred to any person besides Putin as an actual or possible “best friend.”)

Months later, when Trump was in Moscow for the Miss Universe contest, he was obsessed with the prospect of meeting Putin. As Michael Isikoff and I chronicled in Russian Roulette: The Inside Story of Putin’s War on America and the Election of Donald Trump, Trump spent much of that trip anxiously asking his handlers if Putin would attend the Miss Universe broadcast or if he would get to meet Putin elsewhere. Alas, Putin was a no-show, and a top Putin aide told Trump that the Russian leader would not be able to see him. Trump was crushed. But Putin, the aide said, had a gift for him. Weeks later, Putin sent Trump a black lacquered box. Inside was a sealed letter. Though Trump has boasted about this gift—in 2014 he said, “Putin even sent me a present, beautiful present, with a beautiful note”—he has never disclosed the contents of this note from Putin.

Why was Trump so enthralled with Putin at this point? Perhaps it was purely a business matter. For decades, Trump had been trying to score big in Russia. In 1987, he almost cut a deal with the Soviet government to develop a tower in Moscow. In 1996, after the collapse of the Soviet Union, he came close again. But no project materialized. He also talked to Russian authorities about renovating the Hotel Moskva, across from the Kremlin. That also didn’t happen. In the mid-2000s, Trump teamed up with real estate developers to pursue a Moscow venture. Once more, nothing. He also endeavored to sell Trump Vodka in Russia. Another bust.

The Miss Universe event was Trump’s first big win in Russia, after years of striving. And one goal of that project was to pave the way to the long-sought Trump Tower in Moscow. While Trump was in Moscow, he discussed this deal with potential Russian partners. When he returned to the United States, he excitedly tweeted, “TRUMP TOWER-MOSCOW is next.” His company signed a letter of intent with Aras Agalarov, a Russian billionaire developer who had partnered with Trump on the Miss Universe event. Soon after that, Ivanka Trump toured potential sites in Moscow. But this project fizzled, after the United States and the European Union hit Russia with economic sanctions following Putin’s military intervention in Ukraine and his annexation of Crimea.

Trump may have been buttering up Putin to get his tower in Moscow. But it has often seemed that Trump has a psychological affinity for him—as he does for autocratic rulers around the world. On the campaign trail, Trump admiringly called Putin “a strong leader.” When asked in December 2015 about the allegation that Putin had journalists killed, Trump defended him and said, “He’s running his country, and at least he’s a leader.”

At that time, Trump was working on yet another deal to develop a Moscow tower—and keeping this project secret from the American voters. His personal lawyer at the time, Michael Cohen, even reached out to Putin’s office for assistance with the venture. So it’s still possible that Trump was sweet-talking Putin in order to make hundreds of millions of dollars in Russia. (You can’t do a billion-dollar deal in Moscow if you get on Putin’s wrong side.) But Trump’s embrace of Putin always seemed enthusiastic and heartfelt.

This continued after it became apparent in 2016 that Russia was mounting information warfare against the US election in a way that benefitted Trump. Trump and his campaign publicly denied Kremlin involvement in the election and privately sought behind-the-scenes contacts with Russia. It was a signal to Moscow: We’re fine with Putin’s assault on the United States. Following the election, Trump refused to acknowledge that Putin was an enemy who had attacked American democracy. Instead, he invited two of Putin’s pals—the Russian ambassador to the United States and the Russian foreign minister—to the Oval Office weeks after his inauguration, and the three of them were photographed laughing together. Trump even told the pair he was not concerned about the Russian intervention in the election.

Trump was sending a signal to Moscow: We’re fine with Putin’s assault on the United States.

When Trump has met Putin, he has greeted him warmly. He has never criticized the Russian. He has refused to share with US officials details of his private chats with Putin. (He’s all mine!) Most famously, during a joint press conference in Helsinki, Trump indicated that he accepted Putin’s denial of any interference in the 2016 election. (The US intelligence community had concluded that Putin ordered the attack.) At the time, CNN published a list of all the “nice things” Trump had uttered about Putin since becoming president.

Trump dumps on US allies constantly. He viciously attacks political foes. He shows no concern for common courtesies. He likes to play the tough guy. But he melts for Putin. This has been a constant of his presidency. Even when US intelligence reports Putin’s intelligence service is offering bounties to encourage the murder of US soldiers, Trump…does nothing. The White House, not convincingly, has claimed Trump was not briefed on this. Still, after the news reports emerged, Trump said nothing about this Russian operation. He has not expressed outrage. He has not blasted Putin. He has not declared that he will protect American troops.

What accounts for Trump’s fanboy approach to Putin? Does he still hope one day to erect a tower in Moscow? Can he just not quit a brutal strongman? Of course, many people are saying that Putin has something blackmail-ish on Trump (even if the pee tape doesn’t exist—and that particular allegation remains unlikely). Does Trump believe he can forge some grand geostrategic accord with Putin? (Trump certainly doesn’t seem to have the attention span or vision for that.) In any event, there is no one key for cracking the Putin code. But for years, Trump’s actions have spoken clearly: He’s really into Putin.

With his refusal to decry Russia’s bounty program, Trump is once again standing by his man. Even though US soldiers have been endangered by this alleged Russian operation, even though Trump’s own election prospects are further undermined by this revelation, Trump has so far declined to take any action that would threaten his prized relationship with Putin. It’s puzzling, but it’s not complicated. For at least seven years, Trump has wanted to be Putin’s BFF. Whatever the reason, Trump always puts Putin first.