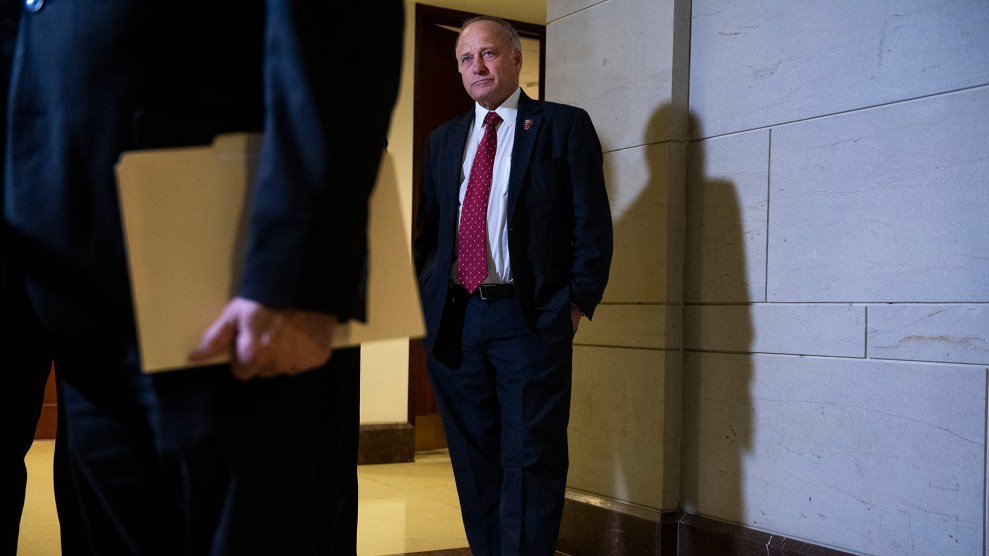 UNITED STATES - OCTOBER 16: Rep. Steve King, R-Iowa, attends a news conference after being denied entrance to the deposition and access to the transcripts related to the House's impeachment inquiry in the Capitol Visitor Center on Wednesday, October 16, 2019. Michael McKinley, a former State Department adviser, and Kurt Volker, the former special envoy to Ukraine, were being deposed inside. (Photo By Tom Williams/CQ Roll Call via AP Images)

Last April, a few months after Iowa Republican Rep. Steve King was stripped of his committee assignments for defending white nationalism in a newspaper interview, the Washington Post asked a provocative question: “What the heck does Steve King do all day?”

The answer, it turns out, was not very much. As the judiciary committee he once served on became the focal point of the impeachment hearings, as the agriculture committee he served on became a battleground in Trump’s trade war, King has had about as much sway in Washington during the 116th Congress as any other private citizen with an internet connection. He filmed short videos for Facebook Live. He seemed to spend a lot of time talking about the conservative YouTube personalities Diamond & Silk. He took a 30-minute meeting with a distant relative “trying to remember all of my aunts and uncles and my brother and where they fit in,” the relative told the Post.

Fourteen months have passed since that story, and the only significant adjustment to that status quo is this: Soon, King might not even have a job to not show up to. On Tuesday, the nine-term Congress member faces the toughest primary challenge of his career, against state Sen. Randy Feenstra. The race is a toss-up, according to the polls. Feenstra has lapped King in fundraising and endorsements. King’s racist and rambling tenure on the Hill might finally be coming to an end.

By now, King’s rap sheet speaks for itself. I would suggest you just google it. There’s Business Insider’s “Steve King questioned if there would be people left on Earth without ‘rape and incest.’ Here are his most disturbing comments.” Or try this website’s “Steve King Was Saying Insanely Racist Things Long Before Republicans Decided Enough Was Enough.” Even the New York Times once published “A Timeline of Steve King’s Racist Remarks and Divisive Actions.” Many of the comments that have gotten him this kind of national press are about Mexicans and Muslims. Some of them are about abortion or Barack Obama. He used to keep a Confederate flag on his desk—not a comment, per se, but it did speak volumes.

But his tough reelection fight isn’t really about those things. His opponent, Feenstra, is anti-immigration, pro-Trump, and anti-abortion—he boasts of being the lead sponsor of the state’s “heartbeat bill,” which banned abortion after a heartbeat is detected. Feenstra’s closing ad features a shot of the border fence, and a promise to finish the job. That should sound familiar to voters in the district. The incumbent, King, views himself as Trump’s most loyal defender. King used to bring little models of a border wall onto the floor of the House. He was pushing Trump’s immigration policies long before Trump entered the picture. (This was actually the premise of that Times piece in which King defended white supremacy.) King co-sponsored the congressional version of the Heartbeat Bill.

Feenstra is not running against King so much as he has running to continue the work that King, his days blissfully free of committee responsibilities, is no longer in a position to do:

I’d show you King’s closing ad, but true to form, he doesn’t have one. In the race of his life, his campaign office is as bereft of activity as his congressional one. He raised practically no money, and much of that went to either fundraising efforts or family members who work on his campaign. Many of his biggest donors, in agriculture and ethanol, jumped ship once their Congress member lost the ability to actually work on the issues they care about. The state’s most prominent social conservative activist, Bob Vander Plaats, jumped to Feenstra. So did the state’s biggest Republican funder, billionaire Bruce Rastetter.

With few resources, King mostly seems to just post tons of memes to his Facebook page—often from the young conservative group Turning Point USA—appended with a bit of commentary so simple a third grader might understand. Some clapping hands (in response to a Trump tweet about designating antifa as a terrorist organization). A smiley face and an American flag (in response to a quote from the actor James Woods bashing liberals). And so on. King used to be a troll who also sat on the agriculture committee. Now he’s just a troll. A January fundraising solicitation told the story of the race: King posted a video of a smiling baby next to the text “FUND OUR MEMES!!!” The baby’s mother demanded he take it down.

There is something fitting about the career of a racist Congress member perhaps crashing to a halt amid a national protest against racism. (King’s contribution to the protest discourse is, predictably, a lot of memes.) But if King loses his job, it won’t be because of what he believes. If Republicans in Iowa and elsewhere had a problem with King’s racism before, they mostly kept it to themselves—Feenstra himself once told King’s son (who is also King’s campaign manager) that he would never think of running against the Congress member. As someone who represented more Republican voters than anyone else in the first-in-the-nation caucus state, King was someone ambitious politicians had to suck up to, to praise on the stump or go duck hunting with. Ted Cruz made King his presidential campaign’s national co-chair. They put up with his little replicas of the fence, his comments about immigrant kids with “calves the size of cantaloupes,” his complaints about multiculturalism and replacement theory, his fraternizing with European bigots. First he came for the Mexicans, and then Chuck Grassley endorsed him.

No, if he loses his job, it won’t be because of how he did it, but because he literally no longer could. The party never came close to abandoning him until it looked not only like he might lose a solidly red district, but that Democrats would pick up so many seats in the House that his district would be irrelevant. Even then, enough leading lights rallied to his support so he could beat Democrat J.D. Scholten in 2018 by a few thousand votes.

King’s interview after the election in the New York Times, in which he offered variations of the same things he’d been saying for years, was not the breaking point or a departure from his normal rhetoric; it was just an excuse at an opportune moment. Keeping the seat again with a legislator who can’t legislate might be harder against Scholten this fall than simply finding another super-conservative pro-life, pro-wall, pro-Trump candidate to take over instead. After all these years, Steve King is finally expendable.