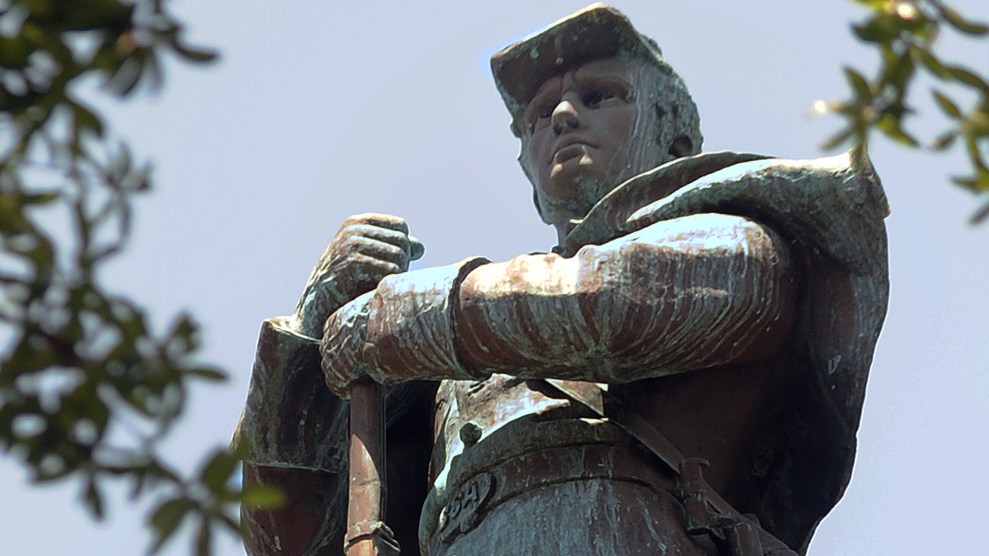 The US military, the New York Times pointed out in an editorial last month, has 10 bases named for former Confederate officers. They include Camp Beauregard, named for the officer who fired on Fort Sumter to start the Civil War; Fort Pickett, named for the person most synonymous in American military history with futile slaughter; Fort Lee, named for the person who ordered that slaughter and ultimately lost the war; and Fort Gordon, named for a person many people are saying was a Klansman. In recent weeks, as protesters have pushed governments across the world to remove monuments to notorious racists—or taken the matter into their own hands—these bases have once again been a target for criticism. On Tuesday, retired general and former CIA chief David Petraeus argued in The Atlantic that the time had come to “remove the name of traitors” from American bases.

But President Donald Trump, who is an idiot, has a different point of view. On Wednesday, he responded that changing the names of these bases would rewrite the nation’s “history of Winning, Victory, and Freedom”:

…history of Winning, Victory, and Freedom. The United States of America trained and deployed our HEROES on these Hallowed Grounds, and won two World Wars. Therefore, my Administration will not even consider the renaming of these Magnificent and Fabled Military Installations…

…Our history as the Greatest Nation in the World will not be tampered with. Respect our Military!

Just to make sure the message was clear, White House press secretary Kayleigh McEnany followed up with a statement arguing that changing the names would insult soldiers who died overseas:

McEnany: "To suggest these forts are somehow inherently racist and their names need to be changed is a complete disrespect to the men and women, who the last bit of American land they saw before they went overseas and lost their lives were these forts" pic.twitter.com/4pMAJe5fsd

The best I can say about Henry L. Benning is that I literally do not even know what he did in the war to become famous. Braxton Bragg’s great contribution to the Lost Cause was a crushing defeat by Ulysses S. Grant at Chattanooga, which led to him being fired and eventually replaced by John Bell Hood. (Incredible eyebrows, though.) Hood was like a white-supremacist Leeroy Jenkins, forever going on offense against superior firepower and never learning any lessons. He lost control of Atlanta to Sherman, transferred to the Army of Tennessee and lost again at Franklin, and then effectively ended the war in the West when he lost half his army at Nashville. The Union commander at Nashville, Gen. George H. Thomas, was a native of Virginia who rejected the Confederacy to fight for the United States.

Trump’s support for keeping Confederate monuments is longstanding. “They’re trying to take away our history,” he said in 2017, when a wave of local officials began removing white-supremacist monuments across the country. He urged Virginia Republicans to support gubernatorial candidate Ed Gillespie so he could “save our great statues/heritage!” Those white-supremacists he called “good people” in Charlottesville? They were rallying against the removal of a Robert E. Lee statue in the city’s downtown.

But if it’s winning, victory, and freedom we want to celebrate, there’s no shortage of heroic figures to choose from. Harriet Tubman, the victorious commander at Combahee Ferry in 1863, had a better win-loss record than Hood, for sure. William Harvey Carney, a former slave who joined the storied 54th Massachusetts Regiment, was shot three times and then won a medal of honor for retrieving the American flag from a fallen comrade at Fort Wagner that same year. That might be a good place to start for a self-styled protector of “our Great American Flag.” Despite the fact that Jeff Daniels (who I do not like) played him in a movie once, I like Joshua Lawrence Chamberlain, who accepted John B. “Fort” Gordon’s surrender at Appomattox and stopped John Bell “Fort” Hood’s advance at Gettysburg. His previous job was teaching at a New England liberal arts college. Talk about the heroism of ordinary people! America’s history of “freedom” and “winning,” such as it is, has nothing to do with the men these bases are currently named for. But it has everything to do with the men and women who defeated them.