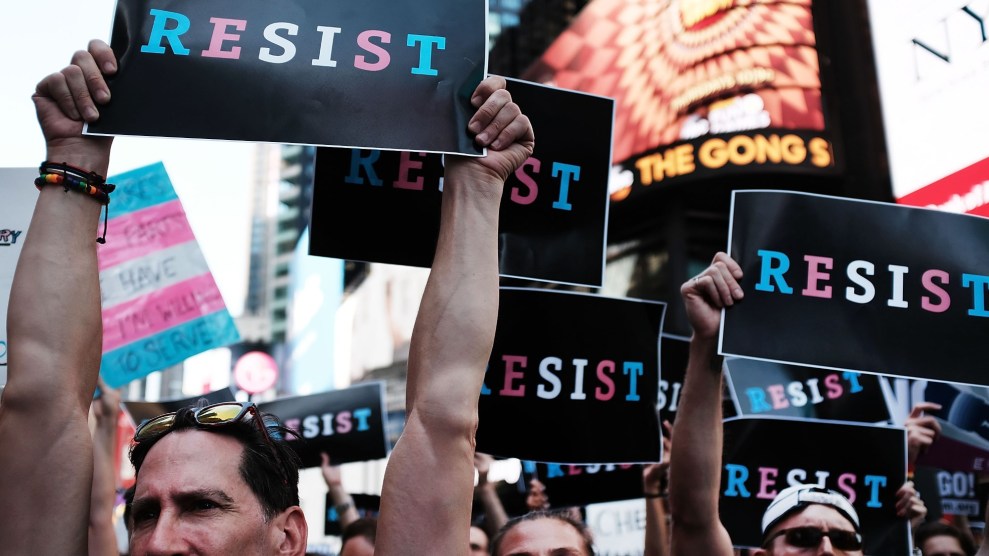 Dozens of protesters gather in Times Square near a military recruitment center to show their anger at President Donald Trump's decision to reinstate a ban on transgender individuals from serving in the military.Spencer Platt/Getty

The Supreme Court on Monday delivered a landmark ruling in support of gay and transgender workers, declaring in a 6-3 vote that discrimination against them violates Title VII of the Civil Rights Act. The surprise majority, which included conservatives Neil Gorsuch and John Roberts, produced no less than a “monumental victory in the fight for LBGTQ equality,” as my colleague Laura Thompson wrote this morning, but it’s important to note that the ruling does not apply to all employees.

In the United States military, where roughly 14,700 service members identify as transgender, Trump administration policy requires them to serve in the gender assigned to them at birth, essentially denying service members the ability to live openly in their preferred gender. The policy was implemented last year after a lengthy court battle, essentially becoming a watered-down version of President Donald Trump’s initial promise, via a series of tweets in July 2017, to ban transgender individuals from serving “in any capacity” in the military.

Monday’s ruling, while a substantial step forward for LGBTQ rights, does not affect the military because courts have consistently held that Title VII, which bans employment discrimination on the basis of sex, does not pertain to the military. Aaron Belkin, director of the Palmer Center, a research institute that has advocated against Trump’s transgender military ban, noted the irony to me of excluding the nation’s largest employer from the ruling. “Today’s ruling makes the military, so often a successful leader in ending discrimination in American life, an outlier amidst a national consensus that arbitrary discrimination is harmful and wrong,” he said in a statement. “With transgender workers protected by federal law in all other sectors, the military’s transgender ban is now even harder to defend.”

Shannon Minter, an attorney for transgender service members who sued the Trump administration over the ban, told me the Supreme Court’s reinterpretation of Title VII to apply to transgender people, if applied to the Equal Protection Clause of the Fourteenth Amendment, should signal “as strongly as it possibly could that discrimination against transgender people in any workplace context, including the military, is sex discrimination plain and simple.”

Even though the Supreme Court permitted the ban to go into effect last year, litigation from advocacy groups has still inched forward. In March, a transgender Navy officer who faces an involuntary discharge after nearly a decade in the military sued Pentagon leaders. Because she was diagnosed with gender dysphoria and came out as transgender after the policy went into effect, she was not grandfathered in like other service members who have been permitted to serve openly in their preferred gender. A waiver ultimately permitted her to continue serving, but until the policy is reversed, attorneys like Minter, who helped represent the Navy officer, have continued to fight. “We know there are many other equally qualified transgender troops who continue to serve under threat of discharge, including several who are navigating the waiver process with no results,” Minter said earlier this month.

The Supreme Court’s ruling won’t change that anytime soon, but it does further reveal the sham at the heart of the military’s reasoning.