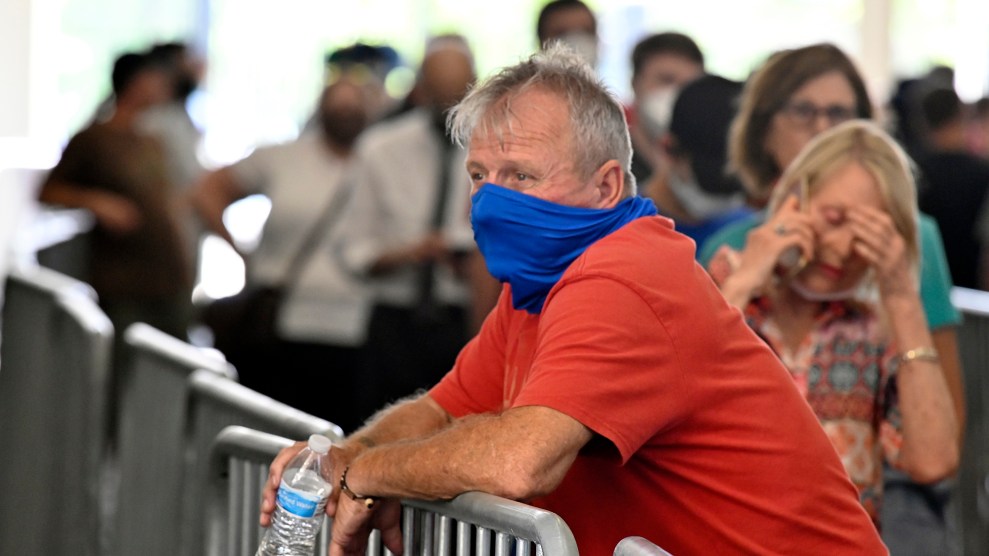 A voter waits in line to cast his ballot in the Kentucky primary on June 23.Timothy D. Easley/AP

Another primary day, another set of voting problems. There were two-hour lines to vote Tuesday in Lexington, Kentucky, which had only one polling location open, while at Louisville’s lone polling place, more than 100 people were locked outside when polls closed at 6 p.m., chanting “open the doors!” (They were eventually let in.) In New York, there were widespread reports of voters not receiving absentee ballots they requested, polling places opening late, and long lines in some precincts.

But voters in these states had it good compared to voters in Atlanta, who earlier this month were forced to wait up to seven hours to vote because of malfunctioning voting machines and a shortage of polling sites and poll workers. Or voters in Milwaukee, where some lines in April were reported to be as long as a quarter of a mile.

Following several highly competitive contests in Kentucky and New York, the 2020 primaries are mostly over. And a pattern of voting problems suggests that there will be major barriers to ballot access for the presidential election in November, when the coronavirus crisis is likely to be nowhere near over.

Throughout the country, states have closed a large share of their polling places amid coronavirus concerns, leading to long lines in Georgia, Nevada, South Carolina, Wisconsin, and Washington, DC. People have voted by mail in record numbers, and states have struggled to process an unprecedented surge in mail-in ballots. Many voters have not received mail-in ballots they requested, or ballots cast by mail have been rejected for minor errors or because they arrived too late. In some states, it’s taken weeks to count the results.

Meanwhile, President Trump has pushed increasingly absurd lies about mail voting—claiming that absentee ballots will be printed by foreign countries or stolen from mailboxes—and seems to be laying the groundwork to challenge the legitimacy of the election if he loses.

All of this bodes ill for a smooth election in November. Here’s what we’ve learned from the primaries and what it means for the general election:

Problems with voting by mail

In nearly every state that held primaries in the spring, a majority of voters cast ballots by mail, compared to fewer than 10 states with a mail-in vote majority in 2018. The sudden increase in voting by mail has led to a number of problems.

There have been many reports of voters not receiving ballots they requested. In Maryland, which was supposed to automatically mail a ballot to every registered voter, 160,000 ballots were never delivered, according to CNN. Fourteen thousand ballots never arrived in Wisconsin; 1,600 ballots that were supposed to be delivered to voters in Milwaukee were instead found at a post office in Chicago.

Though the primaries were a test run, this problem will likely only get worse in November, when many more people—including new and infrequent voters—vote by mail.

These problems will likely only get worse in November, when many more people—including new and infrequent voters—vote by mail.

In Michigan, for example, one million people voted by mail in the primary, a record for the state. This November, that number will likely triple, predicts Michigan Secretary of State Jocelyn Benson, with two-thirds of the electorate voting by mail.  One of her biggest worries is whether the election system can handle that volume. “Now the system has to process three times as many [mail ballots] as it typically does,” says Benson, a Democrat.

And ballots cast by mail are more likely to be rejected than ballots cast in person, because of small errors like mismatched signatures or because they were sent in too late.

“People who vote in person, if they make a mistake, their ballot is rejected by the machine and they have an opportunity to fix it,” says Benson. “We don’t have that feedback loop when voting from home.”

Some of the numbers from the primaries are shocking. New Jersey election officials threw out 10 percent of mail-in ballots in a May municipal election. If the share of rejected ballots is even a fraction of that come November, millions of voters will have their ballots tossed.

Long lines at the polls

Nearly every state that held a primary during the COVID-19 crisis cut the number of polling places, often because they couldn’t recruit poll workers or find locations that met social distancing guidelines. But voters still turned out to vote in person, either because they distrusted mail voting or because their mail-in ballots never arrived and they were forced to vote at the polls.

In Wisconsin, Milwaukee went from 180 polling places in 2018 to five, and Green Bay went from 31 to two. There were 80 fewer places to vote in metro Atlanta, where a majority of the state’s Black voters live. Clark County, Nevada, home to 1.1 million registered voters, had just three polling sites. Lines lasting up to seven hours were the result.

As he slips in the polls, Trump is launching an ever-more-ridiculous attack on mail-in ballots.

The polling place closures exacerbate an existing trend: States with a history of voting discrimination that previously had to approve their election changes with the federal government have closed 1,600 polling places since the Supreme Court gutted the Voting Rights Act in 2013. That has led to a rise in voter disenfranchisement. In Georgia, the closing of 214 polling places from 2012 to 2016 prevented anywhere from 54,000 to 85,000 people from voting in 2018, the Atlanta Journal-Constitution reported.

One of the clear lessons from the primaries is to make sure there are enough polling places open, even as voters are encouraged to vote by mail. “We’re going to be very conservative in reducing in-person voting resources,” says Benson.

As he slips in the polls, Trump is launching an ever-more-ridiculous attack on mail-in ballots, despite the fact that the president and 15 members of his inner circle have voted by mail. Trump and the Republican National Committee are also spending $20 million on litigation opposing efforts to make it easier to vote by mail. “This threatening wave of misinformation is going to increase in magnitude and intensity in the months ahead,” says Benson, whom Trump attacked on Twitter for sending forms to request ballots to every registered voter.

This could make it harder for GOP officials to embrace vote-by-mail. In Iowa, where the Republican secretary of state sent absentee ballot request forms to every registered voter, the GOP-controlled legislature passed a law preventing him from doing the same thing in November without its authorization. Georgia’s Republican secretary of state, who also mailed absentee ballot request forms to registered voters, has said he will not do so again for the general election despite the disastrous voting problems in the primary.

Republicans have been less likely to vote by mail than Democrats in some states. In Pennsylvania, for example, two-thirds of Democrats voted by mail but only one-third of Republicans did so. Since mail ballots take longer to arrive and count than in-person votes, that sets up a scenario where Republicans could be ahead when results are first released but Democrats take the lead after mail ballots are counted—a situation that Trump would certainly exploit to spread conspiracy theories undermining the legitimacy of the count.

‘‘My biggest concern in the state as well as nationally is that voters lose confidence in the sanctity of the process,” Benson says. “The misinformation, the hyperpartisanship, the photos and the stories of how the system has failed in the primaries all can combine for citizens to lose faith in our democracy, and then they either won’t vote or won’t have faith in the accuracy of the results.”

If you thought the primaries were bad, just wait until November.