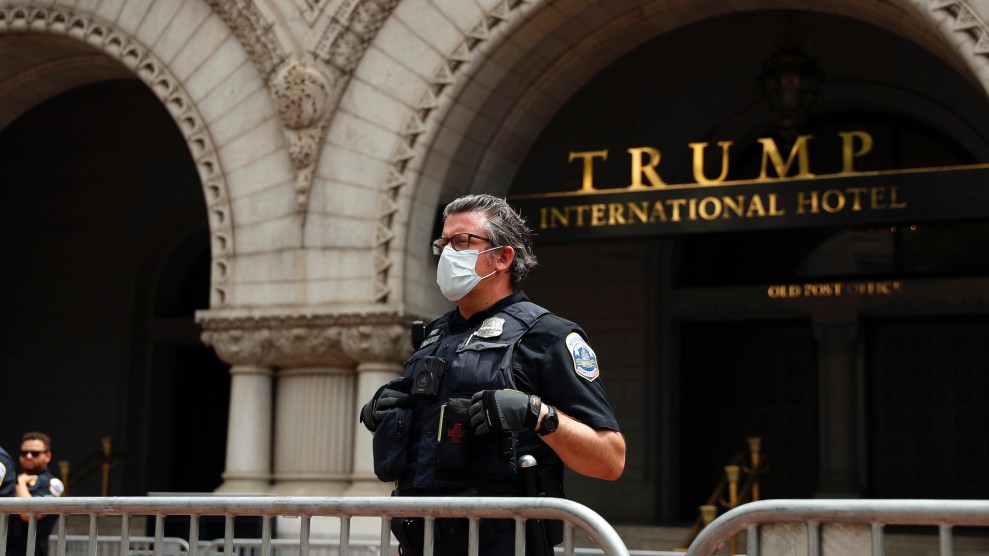 A DC police officer stands in from of the Trump International Hotel as demonstrators protest on June 6 in Washington over the death of George Floyd.Andrew Harnik/AP

President Trump’s personal business empire has taken a beating during the COVID-19 pandemic. With the majority of his income coming from the travel and resort industries, it’s no surprise he’s been so hard hit. At one point in early April, the Trump Organization had closed nearly every property it operates—his luxury DC hotel was an exception—and laid off more than 1,500 employees.

Slowly, the president’s properties have begun reopening, and on Wednesday night, as the country reeled from the COVID crisis and protests over systemic racism, Trump took time to promote the reopening of his Doral golf course near Miami—and to boast that his company hadn’t asked the government for any relief:

…And the Trump family didn’t ask the Federal government for money to carry this and many other very expensive to carry properties! https://t.co/IakI8RiWfj

That is blatantly not true.

As far we know, the Trump Organization didn’t receive any Paycheck Protection Program money, but he most certainly did ask for a break from the federal government he runs.

In the nesting-doll world of Trump’s many conflicts of interests, one of his most flagrant is the arrangement he has with the General Services Administration, the agency that acts as the federal government’s landlord, involving his luxury hotel in downtown DC. The hotel, which he opened in 2016, operates out of a historic old post office building owned by the federal government that he signed a lease to take over in 2013. The lease he signed expressly forbade anyone participating in the lease from holding public office, but after Trump took office, attorneys for the agency (which now reported to Trump) determined the the prohibition applied only at the time of the lease’s signing.

Either way, it created a situation where Trump, the president, is now in charge of the federal agency that Trump, the hotel owner, rents a building from. And it’s not a small deal, either. Trump agreed to pay at least $3 million a year, plus a percentage of any profits from the hotel he operates, for 60 years. Last fall, three years to the day the hotel opened—which also happens to be the first day he could legally make the move—Trump’s adult children announced that their father would be interested in selling the lease.

But that hasn’t happened yet, and the hotel—which has become something of a clubhouse for DC lobbyists, conservative activists, and foreign delegations hoping to make an impression on the president—saw its occupancy plummet from just below 60 percent (which industry experts say is probably not enough for the hotel to break even) to the single digits during the height of the pandemic. So, like many business owners, Trump turned to his landlord—the federal government—to ask for a break on rent during the trying economic times.

So, yes, the Trump family did ask for help from the federal government. It’s not clear if they got it, but they certainly tried. Trump’s tweet Wednesday include a retweet of his son Eric, who back in April confirmed to the New York Times that his family had indeed requested a break on the rent:

The Trump Organization is current on its rent, according to Eric Trump, the president’s son, but he confirmed that the company had opened a conversation about possible delays in future monthly payments.

The younger Mr. Trump said the company was asking the G.S.A. for any relief that it might be granting other federal tenants. The president still owns the company, but his eldest sons run the day-to-day operations.

“Just treat us the same,” Eric Trump in a statement on Tuesday. “Whatever that may be is fine.”

The lie isn’t the only problematic part of the president’s tweet. It also is yet another instance of the president using his podium as the most prominent and powerful American to shill for his own business. Trump has regularly visited his properties over the course of his presidency—he is scheduled to visit his New Jersey golf course this weekend—and on occasion, he has used his gigantic social media presence to promote them.

Through his company, Trump also approached at least one of his lenders—Deutsche Bank—for a break on debt payments, and Palm Beach County, which owns the land under his golf course there, for a break on his rent. It’s not yet clear if he has received either.