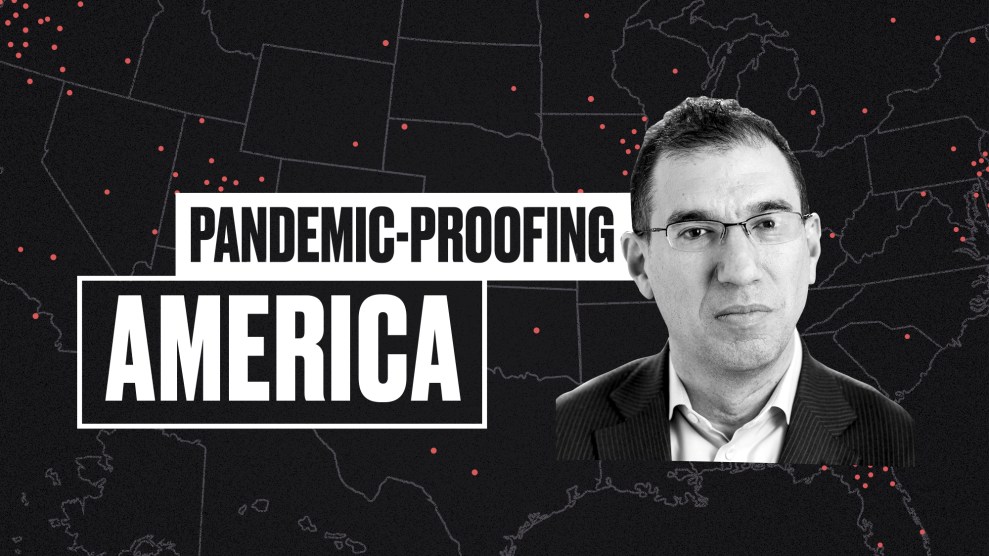 As the world grapples with the devastation of the coronavirus, one thing is clear: The United States simply wasn’t prepared. Despite repeated warnings from infectious disease experts, we lacked essential beds, equipment, and medication; public health advice was confusing, and our leadership offered no clear direction while sidelining credible health professionals and institutions. Infectious disease experts agree that it’s only a matter of time before the next pandemic, and that could be even more deadly. So how do we fix what COVID has shown was broken? In this Mother Jones series, we’re asking experts from a wide range of disciplines one question: What are the most important steps we can take to make sure we’re better prepared next time?

Andy Slavitt knows the ins and outs of public health in America. After decades of leadership in health care companies, he served under President Obama as the acting administrator for the Centers for Medicare and Medicaid Services, where he was instrumental in implementing the Affordable Care Act. United States of Care, the nonprofit he helped build in the years since, aims to improve access to health care for all Americans.

Slavitt grasped the seriousness of the coronavirus back in February, when he urged the White House to ramp up preparations—and he wasn’t shy about criticizing what he saw as a woefully inadequate response. In March, he predicted the shortage of hospital beds and ventilators. Since then, he’s emerged as an authority on both the medical and political dimensions of COVID-19. His podcast, “In the Bubble,” tackles vaccine science, offers advice on confronting mask deniers, and offers solutions to the emerging hunger crisis as the economy falters. His prolific Twitter feed is required coronavirus reading—in voicey threads, he contextualizes the torrent of overwhelming pandemic news. Earlier this week, he summed up what seems like his guiding principle in a single tweet: “Crises are shorter when governments are better.”

“Crises are shorter when governments are better.”

On the three biggest things we can do to prepare for the next pandemic: I gave a speech at School of Public Health at the University of Minnesota in December—little did I know how close we were coming to a pandemic—and I said that the biggest problem in public health is there is no effective public health lobby and no one had put together a case for $100 billion of investment in the country’s public health infrastructure. Here we are, $4 or $5 trillion later, and $100 billion seems like a dream.

We need to be able to do very quick tracing and testing and have that infrastructure up and ready to go. We also need the physical infrastructure, a cache of ready supplies, probably in regional hubs that are continually maintained. For this particular crisis, we know that looks like masks and shields. But depending upon how something spreads, it could be other things. And along with that, we need a domestic drug supply manufacturing capacity so we can control some of the critical medications and not have to rely on overseas trade. I’m quite sure we can get the literal things right. We probably will never run out of ventilators again. But it’s a little bit like responding to 9/11 by saying, “Okay, now we can’t bring water into the airport anymore.” Very literal, right? But that will miss the more substantive lesson.

The second category is health care resilience. We have a health care system where access is tied to employment, and when employment goes down—and it often does in crises like this—people lose access. Another example is the fee-for-service model in hospitals, which stop getting any money when people stopped using elective services. This can also be something we can anticipate in a pandemic. And that money instead is with insurance companies who are supposed to be middlemen. They’re not supposed to be sitting on the money for people. It should be in the community, investing in public health. So you have to change the way care providers are paid. And you have to separate people’s access to health care from whether they’re working.

The third thing is the psychological element to preparedness. We don’t think about public health events. Right now, you can’t go to a major corporation or a school district and say, “Who’s your expert or leader about the health of the population?” And that’s going to need to change at every level. Starting at the federal level, we probably need a cabinet-level position to respond to biological threats, the equivalent of what we did when we created the Department of Homeland Security. It could be done somewhere else. But I think you want somebody who has accountability to the president. We have a president who tore down the infrastructure, and we can’t ever let another president do that again. The safest way for Congress to do that is to create a cabinet responsibility.

But not just at the federal level. I think we need to do that at the state level and at the corporate and company level, at the municipality level. And what that will mean is lots more people having the opportunity within public health as a career. People could work for Google and be in their public health department. Or you could work in a municipality and think about the health issues there. That’s what it’s going to take to have more public health consciousness, rather than having to go back to where it was before the pandemic, which is something that can’t get funded, or continually gets its funding cut.

The lesson for the American public is that in electing a president, you’re electing the entire government.

On Trump-proofing the public health system: You can’t Trump-proof anything. People who want to destroy things and act like little children and have temper tantrums—you shouldn’t elect people like that. Take the CDC: Basically, over time, Trump wanted to neutralize and antagonize the scientific community. He did the same thing at EPA. The lesson for the American public is that in electing a president, you’re electing the entire government.

But I think if you bake in a cabinet-level position with congressional oversight, you have better checks and balances at least. And then, of course, you have to have sufficient funding that goes to the states so you don’t have to have states that are begging and pleading for every dollar.

On the culpability of White House coronavirus response coordinator Dr. Deborah Birx in reopening too early: We can debate whether it was because she was politically trying to please Trump, or because she didn’t see and understand the data correctly. But ultimately she made the wrong call. And it’s not like, “Oh, well this is 20/20 hindsight, she made a mistake, which happens.” Everybody saw what she didn’t see. The lesson is not: it’s not about Birx, it’s about Trump. Because if you cherry-pick the advice you take and make it clear that you only want answers that suit you, then you will pigeonhole yourself. A good president—and I only have experience with one, President Obama—knows how to seek advice and counsel from all quarters to make sure every option is on the table. I’m pretty certain that if Trump had said, “I am open to whatever option you want to put on the table, including things that keep the government shut down,” she would have put different options on the table. I think he hedged her into, “I’m opening May 1, you need to show me how.” That’s not the right way to seek advice from your senior advisors. I don’t let her off the hook. She made a mistake. She should have done better. But it starts with the way Trump manages.

On schools: Next time, it will be great to have red-teamed all of these situations. Who can go to school safely if they don’t live with anyone immunocompromised? Do you have the kind of space you need? Can we get better at distance learning? And if so, what’s the age group where it’s effective and ineffective? If we’re able to know these things going in, then we can have a contingency plan, and it doesn’t have to be this kind of crisis. Right now, we don’t have backup plans, because in this country, we run real-time and efficient. There’s a broad lesson that applies to different elements in society around contingency planning. One of the fallacies of the idea that you starve the government until you need the government is that you end up spending ten times as much money and you spend it less efficiently than if you spent a little bit preparing. I was talking to a former Republican congressman, and I said, “Would you have said yes to increasing people’s taxes or increasing the deficit to fund the preparation for a low-probability event that may not occur?” And the truth is, in Republican leadership, that wouldn’t have stood a chance.

On what we can learn from New York: We learned that a hard lockdown is a critical option that has to be on the table. They did it all over Europe. They did it all over Asia. That is a much better way to get rid of the virus much more quickly. Cuomo did that. The second lesson is that when you’re the governor, you’re going to take criticism, no matter what. And there’s no way to avoid managing in a difficult situation without having people upset with you. If you communicate with people consistently and openly and honestly, then you have more permission to make tough decisions.

Tough political decisions pay off. The hard part is they don’t pay off immediately. But you put yourself in an even stronger position politically by being able to make tough decisions when there is evidence that they’re going to work. And he shows that can be done. I give Governor Abbott credit in Texas for putting in place the mask mandate. He didn’t do it as quickly as people would have liked him to—yesterday is always better than today, but today is better than tomorrow. We have governors who are learning from new information and adapting and making better decisions. I think that ought to be appreciated.