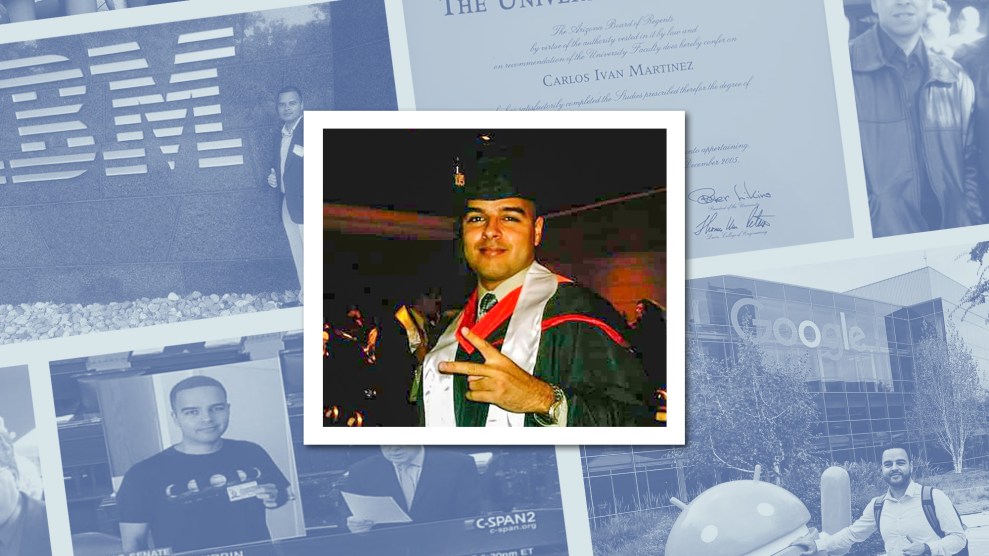 Carlos Martinez was one of the first people in Arizona to get DACA back in 2012. He was literally a poster child for the program: In 2012 and again in 2015, Sen. Richard Durbin (D-Ill.) brought a large poster board portrait of Martinez to the Senate floor to help illustrate the need to protect Deferred Action for Childhood Arrivals from Republican efforts to kill it.

Durbin argued that Martinez was the kind of Dreamer whose overachieving personality and talents contributed to this country and its economy. He told his fellow senators that though Martinez couldn’t afford a computer when he started college, he ended up graduating with a computer engineering degree and was named top Hispanic graduate of his class at the University of Arizona. He pointed out that Martinez went on to get a master’s and later worked for a major tech company in San Francisco. “Giving up on these Dreamers,” Durbin said, “is giving up on the future of this country.”

But for the last 11 months, Martinez has been locked up in a for-profit immigration detention center in Arizona. He has lost his DACA status and fallen ill with COVID-19. And all of it happened because of a poorly thought-out decision to take a brief detour into Mexico—and an immigration justice system more interested in walls and hardliner rhetoric than in showing the slightest bit of mercy to people who have jumped through hoop after hoop to continue living in the only country they’ve ever called home.

“This has been the toughest time of my life,” Martinez said in a phone call from inside the Eloy Detention Center last week. “Being here is terrible. You never want to be in a place where your freedom is taken away from you, especially when you worked so hard to achieve your goals and be a role model.”

“This has been the toughest time of my life,” Martinez said from inside the Eloy Detention Center. “Being here is terrible.”

Martinez, 38, has been living in the United States since he was 8 years old. He came with his brother and his parents, Sylvia Baldenegro and Salvador Martinez, from a small city in Sonora, Mexico, 50 miles south of the US border. They settled in Tucson, where Martinez and his brother went to school. Martinez’s mom told me that, from a young age, Martinez was studious and always wanted to succeed in school. Martinez’s father works in construction, and when we spoke on the phone, he had just come home after working in 110-degree heat. “I know what it means to work pico y pala,” he said. “I always told my son to study and work hard, so he wouldn’t have to struggle like I have.”

So when President Obama created DACA by executive action, Martinez was one of the first to apply and receive the two-year work permit that provides protection from deportation. He met all the requirements for DACA back then and continued to meet them every two years when he renewed it. DACA eventually allowed him to get a job at IBM in San Francisco, but after a round of layoffs a few years ago he returned to his parents’ home in Tucson.

Martinez renewed his DACA status in 2018, so it was still valid for another year while he hunted for a job, unsuccessfully, last summer. He told me he flew to California for multiple rounds of interviews for developer gigs at tech companies like Google, Pinterest, and Niantic, the creator of the Pokémon Go app. “I kept getting so close that I was definitely getting frustrated, plus I had the pressures every day thinking DACA might be eliminated,” he said. “Then I heard a couple recruiters say they don’t trust DACA because it may end tomorrow.”

As he drove into Mexico, he realized what he had done: In leaving the United States, he’d just forfeited the protections that went with his DACA status.

So in an impulsive moment on August 7, 2019, after getting yet another rejection from a potential employer, he decided he’d get out of Tucson for a while to visit his grandmother in Sonora. He was at the US-Mexico border within an hour. But as he drove into Mexico, he realized what he had done: In leaving the United States, he’d just forfeited the protections that went with his DACA status. He turned the car around and was back at the port of entry 45 minutes later, explaining to US Customs and Border agents what had happened. He showed them his DACA permit, hoping that’d be enough to be let in. Instead, he was taken into custody, classified as an “arriving alien,” and sent to the Eloy Detention Center.

“I regret the whole thing. I regret driving over to Mexico, I regret not stopping at the McDonald’s in Nogales, Arizona, not getting an ice cream, and just stopping to think about it,” Martinez said. “Frustration and stress can make you make mistakes or decisions you wouldn’t make under regular circumstances.”

DACA provides temporary protection from deportation and allows recipients to apply for employment. It does not, however, serve as proof of legal status when entering the United States. To leave the country and come back, Martinez needed to have filled out an I-131 form with US Citizenship and Immigration Services requesting advance parole, said Claudia Arévalo, an attorney representing Martinez. That’s how he ended up with a Notice to Appear, the first step in deportation proceedings.

For months, Arévalo tried everything to get Martinez out of Eloy, first requesting bond in a hearing and saying he feared returning to Mexico, and then filing for asylum because that was his only chance to get in front of an immigration judge. “It breaks your heart to see how the system is not taking cases individually,” Arévalo said. “We’re losing a good kid here.”

“It breaks your heart to see how the system is not taking cases individually. We’re losing a good kid here.”

A few hearings and several months later, Martinez applied for a “cancellation of removal,” which essentially means a judge would rule he was no longer deportable and instead could stay and apply for other forms of legal status. In February, after countless documents on behalf of Martinez’s character and statements from his parents, an immigration judge granted their request, saying Martinez could be released and was no longer at risk for deportation. “The judge said, ‘Congratulations and good luck to you, sir,’ and we were like, ‘Yes! We won!'” Arévalo said.

But the DHS attorney immediately appealed the judge’s decision, putting Martinez’s release on hold. “It seems like all my accolades, everything I’ve done to be a good citizen, it seems like they don’t care,” Martinez said. “I’ve given so much to this country that still doesn’t want me here.”

Had the DHS attorney accepted the judge’s decision in February, Martinez wouldn’t have been in a detention center when the coronavirus hit. He had been watching the news about the pandemic on the TV at the detention center and talking about it with his parents when they talked on the phone. “We were scared that he was going to get sick,” his mother told me. “And then he did.”

On June 12, after staff at Eloy tested his pod of detainees, Martinez’s COVID-19 test came back positive. Of the 50 men he was housed with, 45 tested positive for the virus, Martinez said. He hadn’t felt ill, but they were all taken to a separate building and put in solitary confinement. They were only allowed to leave their cells for 20 minutes a day.

“It seems like all my accolades, everything I’ve done to be a good citizen, it seems like they don’t care. I’ve given so much to this country that still doesn’t want me here.”

Shortly after his diagnosis Martinez started getting chills and feeling worse. He felt as though he had a fever for more than five days—a nurse checked his temperature on day one of solitary confinement and didn’t come back for three days. He had no energy, got a cough, and lost his sense of taste.

“The officers didn’t care, they just delivered food,” and sometimes that food came later than scheduled because, he thinks, some guards were afraid of getting infected. “It was terrible the way Eloy handled it, honestly. I was scared that I was just going to die there.”

Martinez said he didn’t receive any medication for seven days. After a week he was given Tylenol and cough syrup. After 19 days, he was taken to a separate building with other men who had already spent a couple of weeks in isolation. He remains there now and thinks he’ll be released to the general population again soon.

The Eloy Detention Center is run by CoreCivic, one of the largest for-profit private prison companies in the United States. As of Tuesday, it had one of the highest numbers of active COVID-19 cases at 118. Since ICE started reporting COVID-19 cases for its detainee population, 252 have tested positive at Eloy. One guard has died of COVID-19 and about 40 percent of all Eloy staff have tested positive for the virus.

For the last four months, public health experts, lawyers, and immigrant rights groups have called on ICE to release people who are not a threat to public safety, but the agency has largely refused to do so. A doctor we spoke to in April called ICE’s coronavirus response “cruel and usual punishment” and “a form of torture.”

Arévalo said ICE has denied her requests to release Martinez after he tested positive for COVID-19. Her latest attempt is still pending. Last week, the Arizona Dream Act Coalition put a callout on social media in support of Martinez. Meanwhile, Arévalo has been in contact with Durbin’s office to see if they have ways to help.

Martinez’s parents are still struggling trying to understand how their son could once have been held up as the model DACA recipient and just years later end up stuck inside an immigration detention center. “I felt so proud to see my son graduating from the university. Imagine how that feels as a parent—it was beautiful to see my two sons graduate,” Martinez’s dad told me. “And now it’s too painful to go to this jail and see my son in a brown uniform with all the other people in prison. Imagine that.”