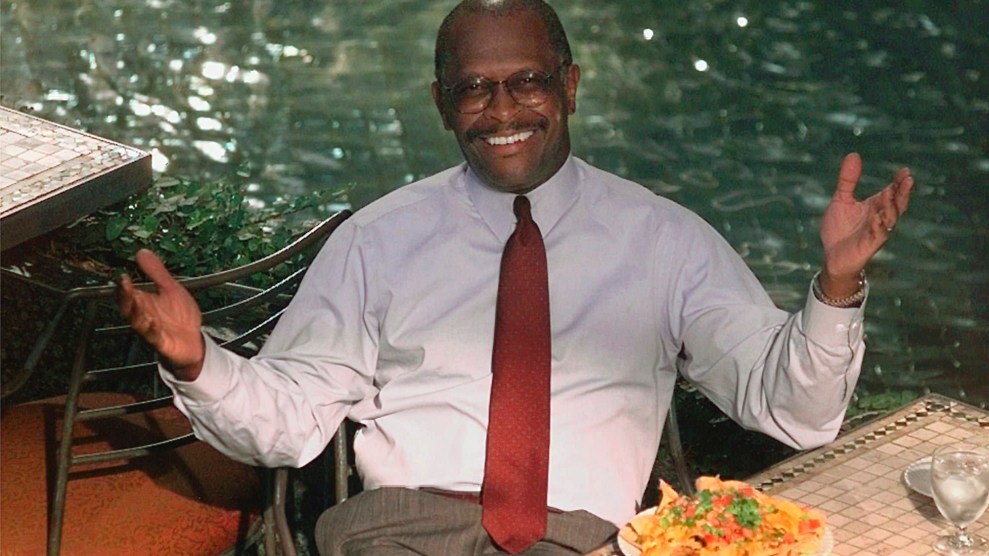 Herman Cain, then-president of the National Restaurant Association, enjoys a plate of nachos at a restaurant in 1998. Michael S. Green/AP

Herman Cain, who died this week of COVID-19, lived quite a life: He was a fast-food magnate, a zealously anti–immigrant presidential candidate, a staunch supporter of Donald Trump to the very end, and more. But his accomplishment with the most lasting impact happened during his days as the number-one lobbyist for the restaurant industry.

During the 1990s, as president of the National Restaurant Association—an outfit representing mainly chain restaurants—Cain transformed the NRA “from a sleepy little trade association to earning a spot in Forbes magazine’s 1997 Survey of Washington’s 25 most powerful pressure groups, coming [in] at number 24,” as labor reporter Mike Elk put it in a 2011 piece. Cain earned his stripes as an ace lobbyist in 1994, when he emerged as a key cog in the successful corporate campaign to kibosh President Bill Clinton’s push to reform the healthcare system.

In 1996, Cain won his greatest triumph as a lobbyist. In a 2016 piece on the racist history of tipping, my colleague Maddie Oatman explained:

America’s first minimum-wage law, passed by Congress in 1938, allowed states to set a lower wage for tipped workers, but it wasn’t until the ’60s that labor advocates persuaded Congress to adopt a federal tipped minimum wage that increased in tandem with the regular minimum wage. In 1996, former Godfather’s Pizza CEO Herman Cain, who was then head of the National Restaurant Association, helped convince a Republican-led Congress to decouple the two wages. The tipped minimum has been stuck at $2.13 ever since.

Restaurant employers were supposed to help servers earn tips to make up the difference between this tipped minimum wage and the regular minimum wage. But the result was by and large a disaster for restaurant servers. According to the Economic Policy Institute, in 1996, the tipped minimum was half the regular minimum wage; by 2014, it was “equal to a record low 29.4 percent of the regular federal minimum wage of $7.25,” where it remains today. Around two-thirds of workers making the tipped minimum are women, EPI reports. Forcing women to rely on the whims of customers for the bulk of their livelihoods exposes them to sexual harassment: “Tipped workers have a median wage (including tips) of $10.22, compared with $16.48 for all workers. While the poverty rate of non-tipped workers is 6.5 percent, tipped workers have a poverty rate of 12.8 percent.” Tipped workers rely on food stamps at a rate twice that of the general population.

Around two-thirds of workers making the tipped minimum are women.

A recent report from One Fair Wage, which seeks to abolish the lower minimum wage for tipped workers, shows that the burden of Cain’s lobbying accomplishment falls heaviest on Black women. “The subminimum wage results in a nearly $5 per hour differential in wages (including tips) between Black tipped women and white men tipped workers nationally, and a nearly $8 per hour differential in New York,” the group found. The low minimum is more painful still, the group adds, as the coronavirus destroys demand for restaurant dining, and a “majority of workers and employers surveyed are reporting that tips are down at least 50 percent.”

Under pressure from One Fair Wage and other advocates, there has been a stirring among restaurateurs in recent years to abandon the whole vexed institution of tipping and pay all workers a regular wage. But one of the most high-profile of the nation’s no-tip restaurant pioneers has backslid. In 2015, the influential New York City restaurant empire Union Square Hospitality Group began phasing out tips. In July 2020, the company’s CEO, Danny Meyer, announced he would return to the practice, suggesting the current economic climate made it too onerous to factor “full liveable wages and benefits for all of our employees into our menu prices,” while competitors still relied on the generosity of diners to provide the bulk of compensation to servers.

Despite Meyer’s reversal, restaurants might not be able to lean on tipping to compensate servers for much longer. Presumptive Democratic Presidential nominee Joe Biden has vowed to double the federal minimum wage and eliminate the tipped minimum if he’s elected. Meanwhile, the National Restaurant Association, the trade group Cain once helmed, continues its lobbying to keep servers’ wages low, putting their livelihoods at the whim of diners.