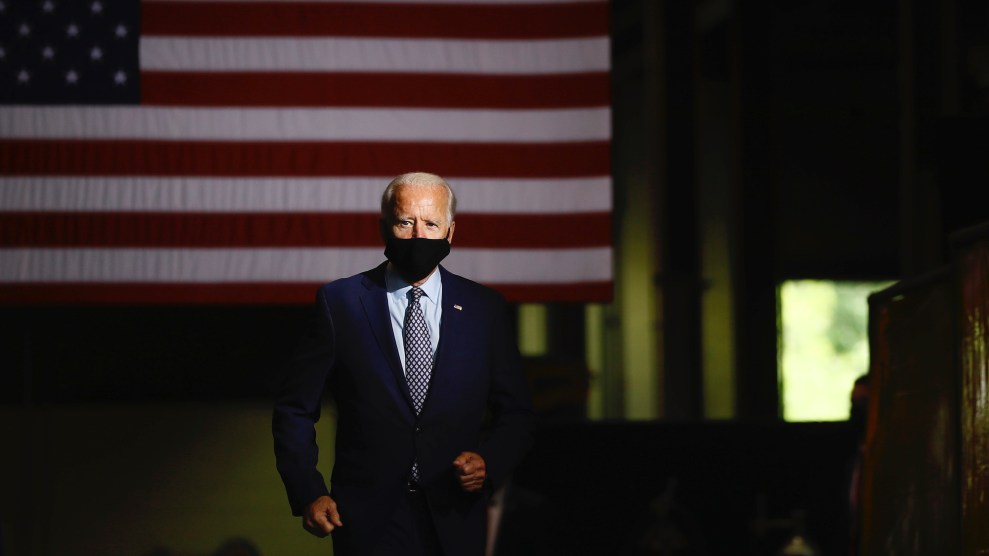 Joe Biden stood in the rain near his hometown of Scranton, Pennsylvania, last week, espousing a vein of economic populism he’d resisted for much of his presidential campaign. He promised his presidency would be the end of an “era of shareholder capitalism” in which corporations like Amazon pay “nothing in federal income taxes.” Now is the moment, Biden said, “to imagine and build a new American economy.”

“The goal is to have people throughout the federal government who know how to exercise power.”

Biden was announcing his “Build Back Better” plan, an aggressive economic recovery proposal to lift the United States out of its pandemic-induced depression. If enacted, it would be the biggest federal investment in American manufacturing since World War II, the heaviest hand in government job creation since the Great Depression. While it doesn’t contain a federal jobs program as comprehensive as Franklin Roosevelt’s policies, Biden’s proposal is the closest thing the Democrats have had to a New Deal agenda in generations. The plan announced last week would invest $700 billion in American-made products, with the aim of creating 5 million new manufacturing and research and development jobs. On Tuesday, Biden will present the details of his clean energy and infrastructure plan, which the campaign promises will create additional jobs.

The proposals fulfill a dream Biden has harbored since the beginning of his previous stint in the White House. As he and President-elect Barack Obama weighed the grim economy they’d inherit on Inauguration Day, Biden imagined ambitious proposals that would not just heal the economy, but build the future—a project as aspirational as Kennedy’s space program. The transitions’ economic advisers—which included deficit hawks like Larry Summers—had other ideas. “Biden was at the December 2008 meeting [about the economic recovery] in Chicago and asked ‘Where’s the moonshot?’” recalls Reed Hundt, a former Federal Communications Commission chair who served on Obama’s transition team. “The economists said, ‘We didn’t give you any plan like that.’”

The final 2009 stimulus bill was, in fact, bold. But Obama’s White House advisers had stood in the way of it being even bolder. In many respects, the Biden campaign has signaled that it won’t repeat that mistake, offering both formal and informal avenues for progressives to share their priorities. But liberals are mobilizing to ensure that continues beyond the campaign, since an election season platform can quickly turn into a list of promises broken once the reality of governing settles in. And so the left is turning up its efforts, hoping to ensure that a potential Biden administration is full of progressive stewards who will help turn these bold ideas into law.

“Biden is moving in a progressive direction, he’s talking about a presidency that’s a progressive presidency,” says Faiz Shakir, who managed Bernie Sanders’ 2020 campaign. “But a lot of that will rest in having personnel who are committed to the policies that the Biden administration is saying they’d like to pursue.”

The Democratic presidential primary was an audition of sorts for which progressive ideas would stick, and some—universal health care, canceling student debt, and closing the racial wealth gap—did. The pillars of Biden’s economic recovery plan echo those of his most progressive primary rivals, Sanders and Elizabeth Warren. As do the specifics: Portions of his manufacturing proposal mirror the “green manufacturing” and “economic patriotism” plans Warren unveiled during her presidential campaign.

But for the most part, Biden sat out the wonk primary earlier this year, opting instead to run against Donald Trump’s debasing of the country and promising a broader return to decency. Once he ascended to the top of the ticket, progressives worried their wish lists would be left behind. And while liberal activists have lauded the campaign’s outreach to progressives, Biden’s team hasn’t necessarily promised to act on the input they’ve received. The former vice president has not yet committed to adopting the policy recommendations of the “unity task forces” that his campaign jointly established with Sanders’ team. The campaign also maintains 20 committees of experts devoted to evaluating domestic policy proposals. Though these groups include progressives who consulted with the Sanders and Warren campaigns, membership in some groups is well over 100, and some who have signed on are skeptical that their ideas will make a difference.

And so attention has turned to personnel—the appointees to roles big and small across the White House and executive branch. Few have embraced the power of those offices as fully as Warren, who premised her own presidential run in part on her of “personnel is policy”; her ubiquitous plans often noted which specific executive branch powers could be called upon to enact her vision, even in the face of a hostile Congress. In 2016, Warren took a stern insider approach with Clinton, pushing her to select certain appointees and resist Wall Street types; her then-Senate chief of staff, Dan Geldon, met several times with Jake Sullivan, Clinton’s senior policy advisor.

This time around, Warren’s efforts are being held tightly under wraps as she continues to be vetted for the vice presidency, though some familiar characters are reprising their roles: Sullivan is a senior policy adviser to the Biden campaign, and Geldon, who served as chief of staff to her presidential campaign, has been in touch with progressive groups who are thinking about personnel. While Warren has sidestepped questions as to whether she’s had a hand in crafting Biden’s economic recovery agenda, the former vice president told members of the Warren-aligned Progressive Change Campaign Committee that he was “grateful” to Warren for her help “in putting together this bold new set of policies aimed at healing our economy.”

In the meantime, Warren’s allies have charted their own courses. The Roosevelt Institute, a Warren-allied think tank, is in the process of identifying progressive economic policy experts, a more concerted iteration of a similar project it conducted in 2016. Several sources familiar with the project say it has identified more than 1,000 wonks ready to plug into a hypothetical Biden administration; the organization plans to circulate those names to key Biden allies in the coming months, according to those sources. (When asked about the precise details of the project, a Roosevelt spokesperson would neither confirm nor discuss them, but said that the group, “like many organizations, is thinking about both policy and personnel ideas for a future administration” and will continue that work as Biden’s transition team begins taking shape.)*

At the same time, the Progressive Change Institute—an affiliate of the PCCC—has set about creating a “personnel power map” of the executive branch, showing which appointed positions have the authority to enact, or thwart, various policy ideas. “The goal is to have people throughout the federal government who know how to exercise power,” says Stephanie Taylor, a PCCC co-founder.

In the past, allies of the policy-obsessed Sanders have been less focused on personnel. After losing the Democratic primary to Hillary Clinton in 2016, the Vermont senator had asked for input into the Democratic National Committee’s platform, but not into the members of Clinton’s cabinet. Shakir says this time, the unity task forces were “phase one of a multi-phase effort” to influence a would-be Biden administration, and the delegates Sanders named to represent him on those task forces were the start of a Sanders-led personnel push.

“You had people who served on the task forces who acquitted themselves quite well,” Shakir says, “and would be valuable to a Biden administration.” As an example, he pointed to the trust that developed between Sanders supporter Rep. Alexandria Ocasio-Cortez (D-N.Y.) and former Secretary of State John Kerry, a longtime Biden ally, who together led the task force on climate change. Shakir says he’s been in touch with Biden’s transition team “a fair amount.”

And while the Sanders camp had been characterized as uncompromising, there’s a willingness to serve. “If people who have invested in caring about these issues for so long are invited to serve on a team that’s trying to solve the problem, any of us should be welcoming of the opportunity,” says Stephanie Kelton, an economist who worked as an adviser to Sanders.

Others across the progressive movement are also plotting their plays. Data for Progress, a liberal think tank and polling firm, is currently surveying voters about their appetite for “revolving door”-style appointments, such as whether they’d tolerate an oil and gas lobbyist being named to the Environmental Protection Agency. The Congressional Progressive Caucus, the House’s liberal flank, was active in Clinton’s personnel efforts in 2016 and expects to reprise that work this cycle.

But how much input can the left really expect? On the one hand, liberals are heartened that the campaign put Ted Kaufman, a longtime Biden aide and trusted progressive who was appointed to Biden’s Senate seat after the 2008 election, in charge of the transition. Other members of the team include Gautam Raghavan—the chief of staff to Sanders ally Rep. Pramila Jayapal (D-Wash.)—and Julie Siegel, senior counsel for economic policy in Warren’s Senate office.

But Biden World is also “the mother of all alumni reunions,” says Hundt, who worked on Bill Clinton’s transition team. Scores of loyal, experienced would-be appointees are waiting in the campaign’s wings. Some are progressive-minded experts like Jared Bernstein, a labor-aligned economist who served as Biden’s first White House economic adviser. But others have a track record of resisting expensive economic programs favored by the left. This latter group includes Summers, who reportedly has been consulting with the campaign.

There’s also a question of leverage. Some on the left felt empowered to extract concessions from Biden as the price for uniting around his candidacy. But a recent New York Times/Siena poll of voters in six swing states found that the party may not need all that much uniting after all: Eight-seven percent of voters who said Sanders was their top choice are already backing Biden, according to the poll. Among those who favored Warren, 96 percent said they will vote for the former vice president.

*This paragraph has been revised to clarify the sourcing.