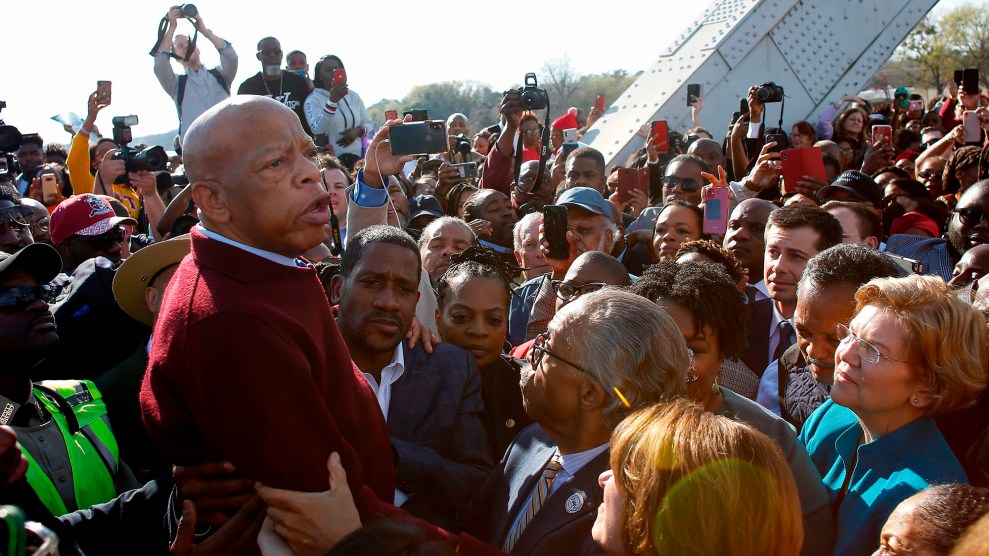 On March 1, as he was battling stage 4 cancer, John Lewis returned to Selma, Alabama, to commemorate the 55th anniversary of the Bloody Sunday march, when he was brutally beaten marching for voting rights. “We must go out and vote,” he told a crowd of thousands on the Edmund Pettus Bridge, “like we’ve never, ever voted before.” He urged the people gathered there to vote in order to “redeem the soul of America.”

“I thought I was going to die on this bridge.”

Incredible moment in the middle of the Edmund Pettus bridge during #Selma55 bridge crossing. Thank you @repjohnlewis. We will never stop working to honor you and all who risked their lives for the right to vote. pic.twitter.com/v0V05D36uI

The vote was personal for Lewis, who passed away late Friday evening at 80. He called it “precious, almost sacred.” He was more responsible than just about anyone for the passage of the Voting Rights Act of 1965.

This is Lewis’ most powerful legacy—showing us how powerful the vote can be but also how fragile it remains today.

Lewis didn’t stop fighting for voting rights after Lyndon Johnson signed the Voting Rights Act, with Lewis by his side. He made expanding access to the ballot his life’s mission.

In the 1970s, he led the Voter Education Project, traveling throughout the South to register Black voters and help elect Black officials to office for the first time since Reconstruction. “Hands that pick cotton,” said the group’s slogan, “now can pick our public officials.”

And when Republicans embarked on a new campaign to suppress voting rights after the 2010 election, by passing restrictions like voter ID laws and cuts to early voting and closing polling places, Lewis was among the first to denounce it. “Voting rights are under attack in America,” he said in the House chamber in July 2011. “There’s a deliberate and systematic attempt to prevent millions of elderly voters, young voters, students, minority and low-income voters from exercising their constitutional right to engage in the democratic process.”

He described how in the Jim Crow South, election officials had once prevented Blacks from voting by demanding that they count the number of bubbles in a bar of soap or the number of jellybeans in a jar. “We must not step back to another dark period in our history,” Lewis warned. “The vote is the most powerful nonviolent tool we have in a democratic society.”

Lewis was sitting in the Supreme Court chamber when it heard a challenge to the Voting Rights Act and told me he almost cried when Justice Antonin Scalia compared the VRA to a “racial entitlement.” He called the decision gutting the law “a dagger into the very heart of the Voting Rights Act.” (I tell this story in my 2015 book Give Us the Ballot, which extensively details Lewis’s long fight for voting rights and which he reviewed for the Washington Post.)

This wasn’t just history to Lewis. I traveled with him on civil rights pilgrimages with members of Congress to Alabama in 2013 and 2015, including for the 50th anniversary of the Bloody Sunday march, when he crossed the Edmund Pettus Bridge with Barack Obama and 100,000 people behind them—one of the most powerful images of the past decade.

"If Selma taught us anything, it’s that our work is never done." —President Obama #Selma51 pic.twitter.com/MoaVS02Crw

He wanted young people in particular to understand the power of the civil rights movement. I remember when he led a group of kids, including the granddaughter of House Majority Leader Steny Hoyer, on a tour of the Sixteenth Street Baptist Church in Birmingham, where four little girls were killed in bombing by KKK in 1963. He showed them pictures in the basement of civil rights activists—including Lewis himself—being attacked by dogs on the orders of Birmingham Police Commissioner Bull Connor.

“You were attacked by dogs?” Hoyer’s granddaughter asked Lewis in disbelief.

But as much as Lewis wanted people to know civil rights history, he also wanted them to know that the fight for voting rights didn’t end in 1965. “I truly believe,” Lewis said last year, when Democrats introduced a sweeping democracy reform bill to make it easier to vote, “that the way votes were not counted and purged in states like Georgia and Florida and other states changed the outcome of the last election. That must never happen again in our country. We will make it illegal.” The bill, HR 1: The For the People Act, passed the House, but Senate Republicans never brought it up for a vote.

In December 2019, Lewis presided over the House as it passed legislation to restore and modernize the Voting Rights Act, requiring states with a long history of voting discrimination to once again get federal approval for any changes to voting procedures. In a primary season marred by voting problems, like six-hour lines in Lewis’ home state of Georgia, it’s been sitting on Mitch McConnell’s desk for 225 days.

Lewis, ultimately, was a man of action, not words. As he said many times, he spoke with his body and his feet—marching, protesting, getting arrested more than 40 times to advocate for change. There have already been petitions to rename the Edmund Pettus Bridge (named after a former Grand Dragon of the Alabama Ku Klux Klan) to honor Lewis. Maybe one day, a new Voting Rights Act will be named after him as well.