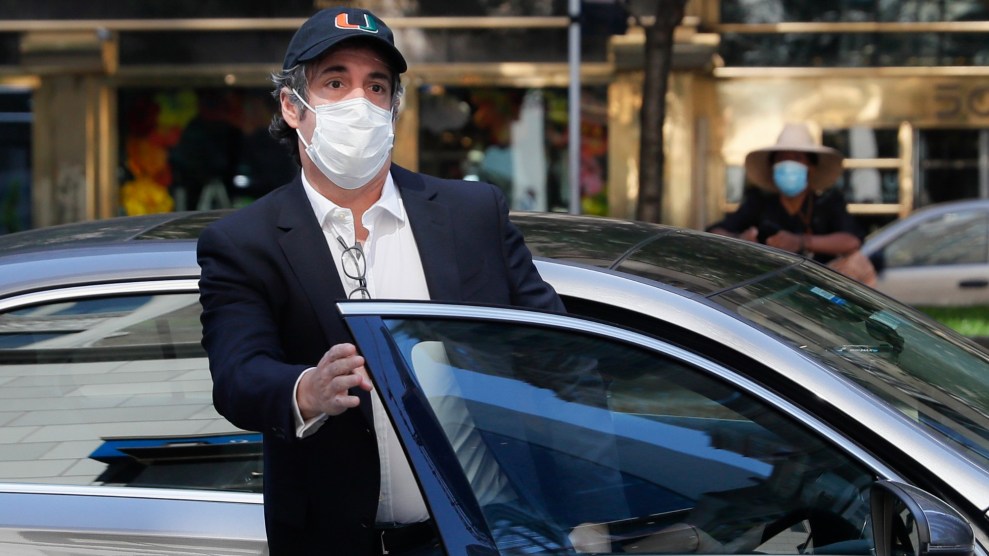 Michael Cohen arrives at his New York City apartment on May 21, 2020, after being furloughed from federal prison.John Minchillo/AP Photo

A federal judge on Thursday ordered Michael Cohen’s release from federal prison, ruling that the government violated the former Trump fixer’s right to free speech by revoking his home confinement after he hesitated to agree not to write a book.

“I find that the purpose of transferring Mr. Cohen from furlough and home confinement to jail is retaliatory, and it’s retaliatory because of his desire to exercise his First Amendment rights to publish a book,” Federal District Court Judge Alvin Hellerstein said in hearing held via teleconference Thursday.

“In 21 years of sentencing people and looking at the terms of release, I’ve never seen such a clause.”

Cohen—who is President Donald Trump’s former personal attorney—was sentenced to three years in prison in 2018, after pleading guilty to tax evasion, lying to Congress, and campaign finance fraud. Cohen said that at Trump’s behest, he had paid two woman who claimed to have had affairs with Trump to stay silent before the 2016 election.

Cohen was furloughed in May due to coronavirus concerns and was due to switch into a home confinement program that included more stringent conditions, such as wearing a location-monitoring device. He announced in multiple public statements in recent weeks that he is writing a book that will elaborate on his prior public statements harshly criticizing Trump. (“He is a racist,” Cohen said at a February 2019 House hearing. “He is a conman. He is a cheat.”)

At meeting on July 9, federal probation officers asked Cohen to sign an agreement that said he would avoid “engagement of any kind with the media, including print, tv, film, books or any other form of media/news” and would stay off “all social media platforms,” among other restrictions.

When Cohen and an attorney with him attempted to negotiate over the terms of the agreement, probation officers said they would check with their superiors. But instead, US Marshals arrived, shackled Cohen, and returned him to custody in Otisville Correctional Facility in upstate New York.

At Thursday’s hearing, Judge Hellerstein wasted little time before indicating that he shared that view, ripping into a federal prosecutors’ claim that the Bureau of Prisons was not required to negotiate with Cohen over the terms of his release at all, and homing in on the restrictions on Cohen’s media contact.

The Bureau of Prisons had initially claimed that Cohen was jailed because he refused to agree to wear an ankle monitor, but it later dropped that claim. Prosecutors said Thursday that Cohen and his lawyer’s objections to the terms of the agreement were sufficient grounds to return him to prison.

But Hellerstein said it was not unusual or wrong to attempt to negotiate over the terms of home confinement. “They were never were given a chance to agree,” he said. “They never were told, ‘Well this is it, and if you don’t sign, you’re going back to jail.'”

Hellerstein ordered Cohen to be released by 2 pm Friday and ordered Cohen’s lawyers and federal prosecutors to negotiate a home confinement agreement that does not limit Cohen’s ability to publish his book or use social media. Hellerstein noted that even under home confinement, Cohen will remain, legally, a prisoner with restricted rights.

Cohen’s lawyers have argued that Barr and other senior Trump administration officials were responsible for trying to silence their client, though no direct evidence supporting this allegation has emerged. Federal prosecutors claim that the gag agreement presented to Cohen was crafted by Cohen’s probation officer, without consultation with senior officials in the Bureau of Prisons or Justice Department.