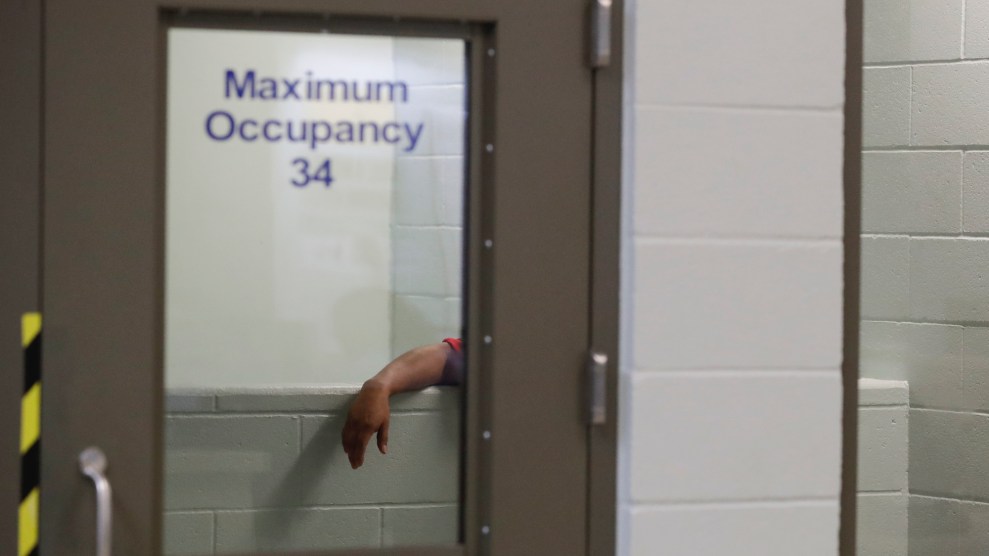 A person in Immigration and Customs Enforcement custody waiting to be processed at the GEO Group's Adelanto ICE Processing Center in California last year.Chris Carlson/AP

Private prison executives claimed at a congressional hearing Monday to be unaware of any recent instances of guards pepper-spraying immigration detainees at the facilities they run. It was a shocking claim: Detainees have been pepper-sprayed on more than a dozen occasions since late March, and Immigration and Custom Enforcement’s own press office has confirmed many of the incidents the CEOs say they know nothing about.

Monday’s hearing focused on the often abysmal conditions in for-profit immigration detention centers during the coronavirus pandemic. One question from Rep. Donald Payne (D-N.J.) to four executives testifying virtually was hard to misinterpret. “So no one is aware of any time that rubber bullets, or pepper spray, or tear gas has been used by officers at your facilities against detainees since the COVID-19 pandemic?” he asked. “Are you all categorically denying it?”

In response, CoreCivic CEO Damon Hininger, Management and Training Corporation CEO Scott Marquardt, and LaSalle Corrections executive director Rodney Cooper said they were aware of no such incidents. GEO Group CEO George Zoley said he was aware of one incident in California.

In reality, people at CoreCivic facilities have been pepper-sprayed on at least four occasions. At LaSalle, it’s happened on at least five occasions. And at GEO Group detention centers, the total is also at least five. Hundreds of immigrants and asylum seekers have been exposed to pepper spray during those uses of force. There have been no recent documented cases of pepper spray at Management and Training Corporation centers. (All of these companies have contracts with ICE, which pays them to house immigration detainees at their facilities.)

I’ve broken the news of several uses of pepper spray at for-profit ICE detention centers in recent months. In one case, guards at a GEO Group detention center in Louisiana left nearly 80 women trapped in a pepper spray-filled dorm after a COVID-19 briefing.

Later in the hearing, Rep. Kathleen Rice (D-N.Y.), the chair of a border security subcommittee, asked Hininger of CoreCivic to address the fact that one of his own spokespeople confirmed that pepper spray was used against detainees at a CoreCivic detention center in New Mexico.

Hininger said he misunderstood Payne’s question and confirmed that pepper spray was used at the Torrance detention center. He didn’t mention other incidents in Arizona and Georgia.