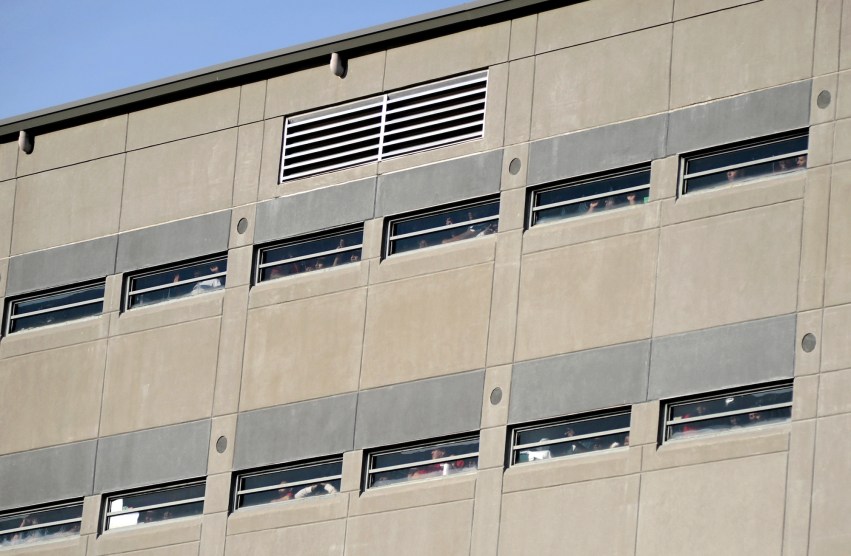 People detained at the Etowah County Detention Center in Gadsen, Alabama, come to the windows to watch as protesters march in front of the jail in 2011.Sarah Dudik/AP

On June 29, Stephen Brown was woken up around 4 a.m. and told that he was about to be moved from the jail in Clinton County, Pennsylvania. He didn’t know where he was heading. Brown, who came to the United States from Jamaica as a teenager 40 years ago, learned that six other immigrant detainees were being transferred from the jail. He realized that the seven of them had something in common: They were all suing Immigration and Customs Enforcement.

Over the next 24 hours, they were loaded into a van to cross through Pennsylvania, a plane to Texas and then Louisiana, and a bus to Alabama, according to a sworn declaration Brown submitted in federal court this month—all of which put them in close quarters with each other and with guards just as the number of COVID-19 cases nationwide was spiking. The seven men ended up an hour northeast of Birmingham at the Etowah County jail, which now has 20 active COVID-19 cases, according to ICE’s website. The Pennsylvania jail they left has none.

Eunice Cho, a senior staff attorney at the American Civil Liberties Union, which is representing Brown in his suit, says ICE has long used transfers to the Deep South as a form of retaliation and to get people under the jurisdiction of conservative judges. What’s new is that those transfers now mean potentially exposing people like Brown, who has high blood pressure, to the virus that led them to sue for their release in the first place. They also risk spreading COVID-19 between detention centers.

“We’re seeing ICE transfer people in a retaliatory manner,” Cho says. “This, of course, is not a new thing. ICE has done this for years before COVID broke out. But in light of the COVID pandemic, the risks to people because of transfer are even more heightened.”

An ICE spokesperson declined to comment. But in response to another recent ACLU lawsuit, ICE denied allegations that it transferred people from Massachusetts to Etowah as retaliation for suing the agency.

Brown ended up in ICE custody after pleading guilty to an attempted heroin distribution charge in 2016 and serving time in federal prison, according to federal court records. An immigration judge ordered him to be deported this year, though Brown, a US Army veteran, is now appealing that decision.

In addition to Brown, the ACLU is representing 10 other detainees who are vulnerable to COVID-19 and seeking release from three Pennsylvania immigration detention centers. Cho says Brown is the only plaintiff in the case who has been transferred out of the state.

The other six detainees who were transferred, who were among dozens of people at Clinton County suing ICE without an attorney as part of a different lawsuit, had all taken part in a brief hunger strike at Clinton a few days before the transfer, according to Brown’s declaration. The ACLU argues in its lawsuit that the transfer was “blatant retaliation.” A jail roster shows that all six remain at Etowah.

The transfer could make it harder for the six men to secure improved detention conditions. Their lawsuit focuses on conditions at the Clinton County jail. Transfers cause claims to become moot, or no longer legally relevant, when a lawsuit challenges conditions at a specific jail, Cho explains. If the six men filed a new lawsuit to demand better treatment at Etowah, ICE could transfer them again or choose to fight the case in the conservative Northern District of Alabama.

In April, Bakhodir Madjitov, an Uzbeki asylum seeker who has high blood pressure and a heart condition, was one of 19 medically vulnerable people who sued to be released from Etowah to protect him from COVID-19. The complaint filed in the Northern District of Alabama stated that Etowah had responded to the pandemic by moving more than 100 ICE detainees into one unit of the jail, where they were often in close proximity to each other in common areas. Instead of clamping down on the spread of the virus by enabling social distancing and avoiding new transfers, the lawsuits states, the jail purchased a “fogger” machine to spray cleaning chemicals, even though the Centers for Disease Control and Prevention doesn’t recommend the practice.

Judge R. David Proctor, a George W. Bush appointee, ruled against releasing Madjitov and his fellow plaintiffs in May. With only one COVID-19 case among Etowah ICE detainees at the time, Proctor argued that it was hard to determine whether they would be safer inside or outside the jail.

Madjitov, who is married to a US citizen and has three young boys, told me last week that he was moved to isolation cell at Etowah on July 6 after coughing and experiencing body aches, and a few days later he tested positive for COVID-19. Most of the people in his unit had been sick, but many avoided getting tested because they didn’t want to be moved to solitary confinement, Madjitov said. He believed the outbreak had been caused by ICE transferring people to Etowah from a Massachusetts county jail in June. One of those people became Madjitov’s cellmate after a one-week quarantine, he said.

Etowah, which did not respond to a request for comment, has long been criticized by immigrant advocates for lacking basic amenities like an outdoor recreation area, but it’s been a boon to the local economy. After ICE decided against ending its contract with Etowah in 2011, the local paper wrote, “It had to be like Christmas, New Year’s, the Fourth of July and a whole bunch of birthdays rolled into one when Etowah County officials got ‘the call’ telling them U.S. Immigration and Customs Enforcement had decided to keep more than 300 detainees in the Etowah County Detention Center.” A 2018 AL.com investigation found that the local sheriff had bought a $740,000 beach house after pocketing more than $750,000 in jail food funds. The following year, a new sheriff invited the television station A&E to send innocent people into the jail to be undercover inmates on a reality show.

Brown wrote in his declaration that Etowah seemed worse than Clinton County and that the intake process had been particularly bad:

There were about 25 guys in the intake cell. It was impossible to social distance there—I was sitting right next to people. Some of them were laying on the ground—including me, because I was tired and wanted to sleep. On the ground, we were laying right next to each other. It smelled like pee on the ground too where we were laying. It was really filthy. I had to wait about 12 to 13 hours until was processed. I saw the intake people take on and off their masks—they were not consistently wearing them. Around 4:00 or 5:00am we were finally taken [to] the quarantine block.

Brown’s daughter, Britney, a rising senior at the Fashion Institute of Technology in New York City, still hopes that her dad will be able to attend her graduation next year. “America was built off the backs of immigrants,” she said. “Why do these people have to be treated this way? I don’t understand. It’s just disgusting in my opinion.”