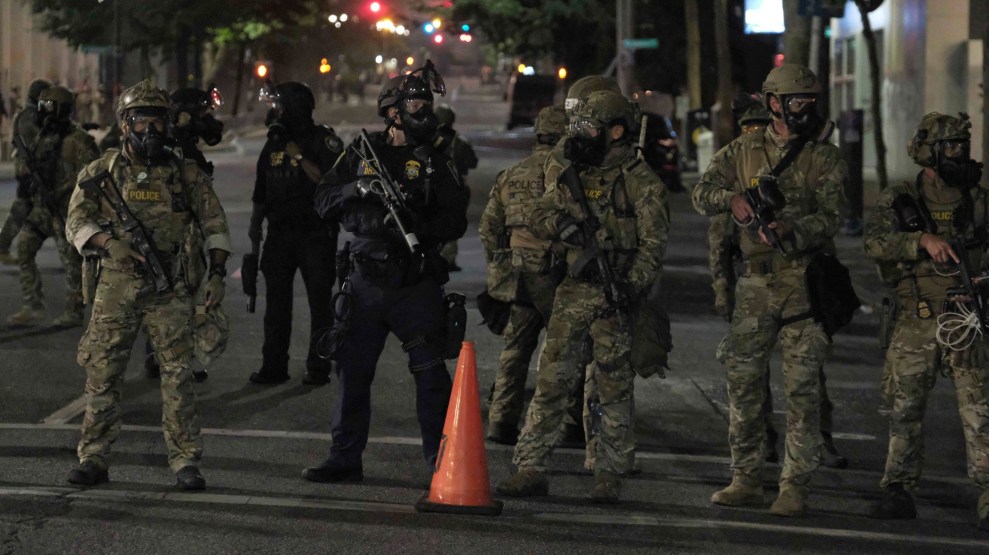 Federal officers in Portland, Oregon after clearing the streets with tear gas and other crowd control munitions, on July 18, 2020.Alex Milan Tracy/Sipa via AP Images)

“With as much lawbreaking is going on, we’re seeking to prosecute as many people as are breaking the law as it relates to federal jurisdiction,” acting Homeland Security Deputy Secretary Ken Cuccinelli told NPR on Friday. “That’s not always happening with respect to local jurisdiction and local offenses. But, you know, this is a posture we intend to continue not just in Portland but in any of the facilities that we’re responsible for around the country.”

In Portland, DHS, defying the express wishes of elected officials, appears to be using the fig leaf of defending federal property to pursue President Donald Trump’s wish to forcibly suppress unrest. In what critics call clearly unconstitutional behavior, camouflage-clad officers—Mother Jones reported on Friday that they are Border Patrol agents—have arrested protesters, allegedly without identifying or explaining themselves. Federal officers have used tear gas and shot projectiles from paintball guns at protesters.

Officials at DHS and US Customs and Border Protection claim that they are in Portland to in support of a June 26 executive order in which Trump directed the Departments of Justice, Homeland Security, and Defense to provide “personnel to assist with the protection of Federal monuments, memorials, statues, or property.” More specifically, CBP says that its agents are deputized to help the Federal Protective Service in guarding federal property, a role that the DHS secretary has statutory power to give them. In Portland, CBP says it’s protecting the Hatfield Federal Courthouse from vandalism.

These efforts do face legal challenges. The US attorney in Oregon has requested an investigation into videos of camouflaged federal authorities without identification arresting protesters in Portland, CNN reported. In a statement Friday, CBP told Mother Jones its agents had carried out arrests in the city and defended them as legal.

On Saturday, Oregon’s Attorney General sued DHS and other agencies Friday night, arguing they are violated the Constitution by detaining and arresting demonstrators without probable cause. On Friday, the American Civil Liberties Union’s Oregon branch sued DHS and the US Marshals Service, which is part of the Justice Department, seeking a court order to block federal officers “from dispersing, arresting, threatening to arrest, or using physical force against journalists or legal observers.” The ACLU said it will be filing additional lawsuits in coming days aimed at restraining federal action in the city. Citing Cuccinelli’s comments on nationalizing the Portland model, the ACLU tweeted: “We won’t let them.”

But DHS is pushing ahead. With little notice, the department has already dispatched teams of agents to police the National Mall in Washington, Gettysburg National Military Park, and other locations. Cuccinelli seems set on further expansion.