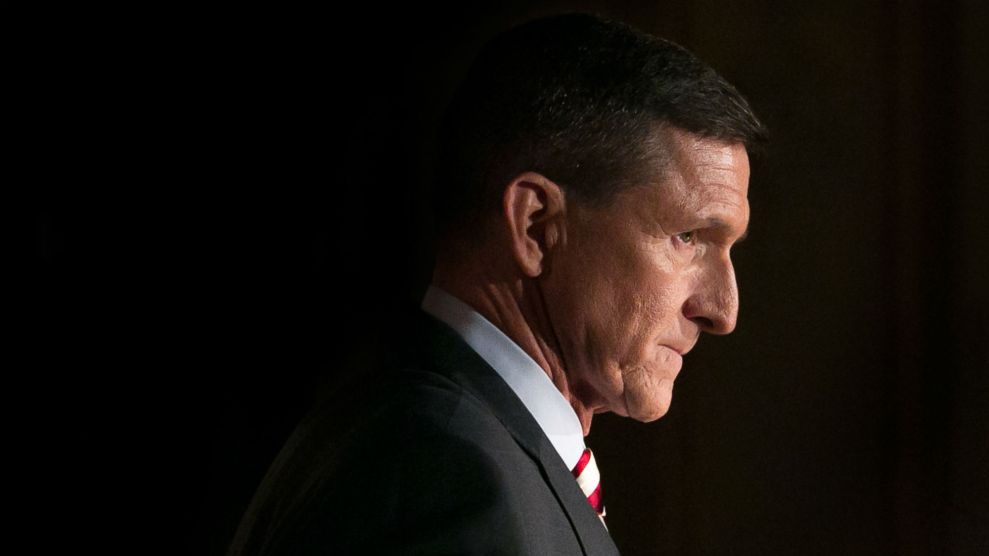 Donald Trump’s former national security adviser, Michael Flynn, posted a video on Independence Day in which he recites an oath for QAnon conspiracy theorists along with five others.

The man Trump appointed to the most sensitive national security position in US government and a current martyr/hero of the Trumpist right just posted a video of himself taking the QAnon oath. https://t.co/w5dyHCUEwz

Flynn had been circling the QAnon world for months, but this takes his flirtation with the group a step further. As the QAnon conspiracy theory goes, powerful liberal politicos are running an underground child sex trafficking operation but will ultimately be exposed and charged for their crimes after “The Storm.” There is, of course, no evidence that such a scheme exists. The oath, which includes the QAnon slogan “Where we go one, we go all,” refers to “an oath to become ‘digital soldiers’ to defend the Constitution,” explains the Daily Beast‘s Will Sommer. In the last month, following other cryptic messages of support for the QAnon conspiracy, Flynn added #TakeTheOath to his Twitter bio. As Sommer reports:

Flynn plays a large role in QAnon mythos, where his guilty plea for lying to the FBI about his discussions with Russian officials has been spun to make him a persecuted victim of the deep state—or even, in some cases, as the mysterious “Q” himself. Many QAnon fans have added three star-emojis to their Twitter handles, in a nod to Flynn’s status as a retired three-star general. Pictures of books supposedly signed by Flynn with the QAnon slogan “Where we go one, we go all” are seen in the QAnon community as powerful “proof” that QAnon is real, although their authenticity hasn’t been proven.

Through it all, Flynn had publicly stayed silent on QAnon and his role in the conspiracy theory, while his son told QAnon believers to stop claiming his father was involved in their worldview. But sometime in the last month, Flynn edited his Twitter bio to add a QAnon hashtag: #TakeTheOath.

…Flynn himself actually coined the term “digital soldiers” years ago, in reference to United States cyberwar capabilities. But QAnon believers have recently become fixated on it, convincing themselves that Flynn was actually referring to them. The oath craze has gone so far that, on Saturday, QAnon believer and Republican Senate nominee Jo Rae Perkins posted a video of herself taking the oath to become a “digital soldier.”

Flynn’s message, though alarming, falls into a larger trend: QAnon online activity has been on the rise since the start of the pandemic. As my colleagues Ali Breland and Sinduja Rangarajan reported last month, Google Trends shows that QAnon search terms like “WWG1WGA” (where we go one, we go all) spiked in March as US businesses started to close. Wikipedia’s QAnon page saw a surge in pageviews in March and April. Mentions of QAnon on Twitter have also increased:

A Mother Jones analysis of nearly 500,000 tweets posted across one week in April found that the average number of tweets per day using the hashtag #QAnon increased by 160 percent as compared to the averages compiled over six months of 2019 by the Twitter user @conspirator0 (Twitter later limited searches of posts on its platform, making other comparisons difficult.) The highest daily number of QAnon tweets documented by the account in 2019 was 75,349. After the onset of the US’s coronavirus crisis, that figure nearly doubled, reaching a high of 147, 748 tweets on April 4, 2020.

Anecdotal examples bolster what the data shows. Internet communities that hadn’t previously done so are now associating with far-right conspiracies like QAnon, impending mass arrests of elites for running pedophile rings, and liberal megadonor George Soros’s supposed plots. Across Instagram, pseudoscience wellness influencers, lifestyle influencers, anti-vaxxers, at least one contributor to Gwyneth Paltrow’s Goop site, and other seemingly unrelated groups have all pivoted to spreading versions of these conspiracies that emerged on the far right.