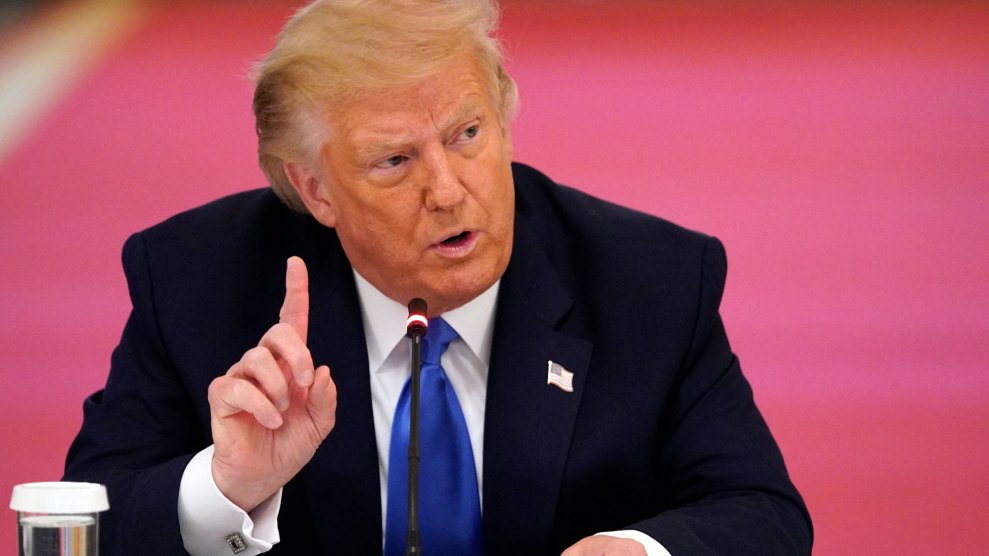 Late last week, as part of his ongoing effort to pressure schools into reopening this fall during the coronavirus pandemic, President Donald Trump threatened the tax-exempt status afforded to schools throughout the country, adding that “too many Schools and Universities are about Radical Left Indoctrination, not Education.” As a legal matter, law professors and a former US Education Department attorney tell Mother Jones, Trump’s threat is a nonstarter on First Amendment grounds, but that doesn’t mean it’s harmless.

“At a practical level, higher education and K-12 education operate on a nonprofit basis. That’s the way it’s been for time immemorial,” says John DiPaolo, who worked at the Education Department for five years during the Obama administration. “To threaten to try to remove that is to threaten to economic harm or even to destroy higher education or K-12 institutions.”

… and/or Funding, which will be taken away if this Propaganda or Act Against Public Policy continues. Our children must be Educated, not Indoctrinated!

DiPaolo, who served as deputy general counsel for postsecondary education from 2014 to 2017 and now works as general counsel to University of California, Hastings College of the Law, sees Trump’s tweets less as an immediate material threat to schools than as a revival of an old right-wing trope. It’s the claim that higher education is “a political player on the left and a threat to the political position of those on the right,” a rhetorical attack used to “debilitate educational institutions.”

“Whatever the political viewpoints that could be espoused or discussed in a classroom or at an institution, the government can’t decide to remove a benefit because the president or any part of the government doesn’t like those political views,” says DiPaolo, who emphasized that he wasn’t speaking as a representative of UC Hastings. “That’s a cardinal view of the First Amendment, that the government doesn’t get to pick and choose among the viewpoints that it likes and doesn’t like, and give benefits on that basis.”

The president’s latest Twitter eruption comes as he and Education Secretary Betsy DeVos pressure administrators by tying additional funding relief to their willingness to reopen their schools’ doors—another bluff lacking any legal basis. On Fox News on Sunday, DeVos told Chris Wallace that schools that fail to reopen during the fall shouldn’t receive federal funds.

Wallace follows up on multiple Trump threats to cut off school aid; asks how she would do that. Shouldn't you want to spend *more* money, he asks?

DeVos: If schools aren't going to reopen, they shouldn't get federal funds.

Wallace: You can't do that unilaterally.

The closest precedent for revoking an institution’s tax exemption is the case of Bob Jones University, says Clinton Wallace, who teaches tax law and tax policy at the University of South Carolina. The Christian fundamentalist college in Greenville, S.C., was stripped of its exemption in 1970 because of its ban on interracial dating and marriage. Bob Jones argued that the Internal Revenue Service was infringing on its religious freedom. In 1983, the Supreme Court sided with the IRS, concluding that the government’s interest in eliminating racial discrimination in education outstripped whatever burden the denial of tax benefits would place on Bob Jones’ religious freedom. In 2017, the university regained its tax-exempt status.

Wallace says that the Bob Jones case was an outlier—one of the rare moments when the IRS revoked an exemption because an institution’s actions were “so obviously contrary to general public policy.”

“And that was easy enough with blatant racism at Bob Jones, and they were defending their right to discriminate,” he says. “But it has been harder in other cases. It’s not something that they [the IRS] have pressed.”

“Fighting racial discrimination, particularly in education is a value that has been embraced and enshrined in the constitution,” DiPaolo says. The Bob Jones case is an “exception that proves the rule,” he adds. “It was a very special case in terms of what the school was doing and how that related to the overall conception of the public good and the whole nation that led to this happening. It’s really, really different from what Trump’s is talking about.”

Derek W. Black, Wallace’s colleague at South Carolina at the University of South Carolina and author of Schoolhouse Burning: Public Education and the Assault on American Democracy, tells Mother Jones that threats from the president don’t need much legal backing to cause real harm.

“When you are willing to be that lawless, you scare people,” he says, referring to the Trump administration’s threat to withhold money from schools that refuse to open. “You end up scaring them into giving up their legal rights because you are talking about millions of dollars at stake. Maybe you’re not sure or maybe you’ve never fought with the federal government before. Or maybe it’s better just to go along to get along and hope that someone else will step up and write things. But you have this vacuum in time in which, once they issued that [threat], they get what they want. If it forces additional 30, 40, 50, or 100 universities to do something they weren’t going to before, this administration could care less that they lose in court after he’s not even in an office anymore.

“When we used to talk about the bully pulpit of the presidency, what we meant was the president’s ability to convince people that he or she was right, and for them to agree with the president. But [for] this president and the secretary of education, the bully pulpit is actually different. It is a physical bully pulpit, in which we will try to compel you and force you through money to do things that we think are in our political best interest but there’s no legal basis for. So they’re taking the bully pulpit to a whole new level, and then it’s on institutions to defend themselves in court against a bully.”