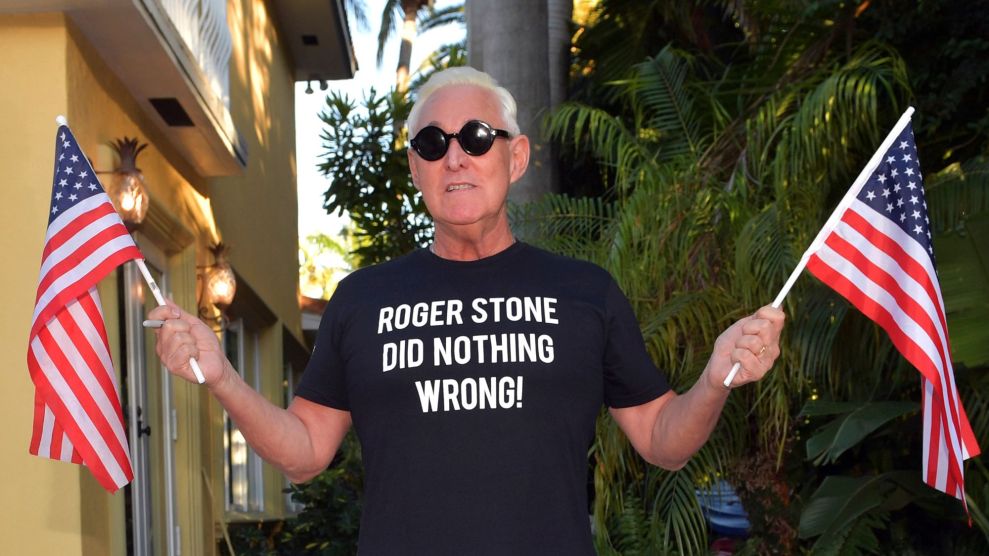 When President Donald Trump earlier this month commuted the prison sentence of his longtime adviser Roger Stone, the media coverage generally missed a critical fact: This brazen act of cronyism was the culmination of a cover-up that aimed to hide Trump’s wrongdoing. But a new book out this week provides more evidence of this conspiracy and offers additional information suggesting that Trump lied to special counsel Robert Mueller during the Russia investigation and, in doing so, possibly committed a crime.

The book, A Case for the American People: The United States v. Donald J. Trump, was written by Norman Eisen, who served as special counsel to congressional Democrats during Trump’s impeachment. In this work, Eisen, who previously was ethics czar for President Barack Obama and US ambassador to the Czech Republic, presents the inside story of the third impeachment in US history, detailing the internal debates and conflicts among House Democrats and sharing juicy, behind-the-scenes anecdotes of the trial. The book reveals that the House Judiciary Committee initially drafted a wide-ranging list of 10 articles of impeachment for Trump before narrowing the case to two articles related to the Ukraine scandal.

In the book, Eisen sharply (but respectfully) criticizes Mueller for a “failure to go the distance.” He contends that Mueller let the republic down by not pursuing an obstruction of justice case against Trump “all the way” to the end. (In his final report, Mueller presented evidence indicating Trump committed obstruction, but he reached no firm conclusions and determined that under Justice Department policy, he did not have the authority to indict a sitting president.) “The refusal to admit there were at least five chargeable crimes was his shortcoming, not his lack of style,” Eisen writes of Mueller. “I understood his old-fashioned restraint under the special counsel regulations and typical prosecutorial standards. But he had leeway under the rules to do much, much more, and he didn’t.”

One example of Mueller’s dereliction, Eisen contends, is the Roger Stone case.

Stone was prosecuted by Mueller’s team for lying to Congress during the Trump-Russia investigation and for witness tampering. He was found guilty by a jury and sentenced to 40 months in prison—and then Trump eradicated the sentence shortly before Stone was to report to a federal prison. Stone had lied to Congress about his efforts during the 2016 campaign to be in contact with WikiLeaks, while that website was disseminating emails and documents that had been stolen from Democrats by Russian hackers as part of a Kremlin operation to help Trump win the White House. But the extent of Stone’s shenanigans—and Trump’s personal and possibly criminal involvement—never became a central component of the Trump-Russia scandal narrative, and Eisen blames Mueller for not fully pursuing this matter. Moreover, Eisen reports that he and his fellow staffers developed important evidence on this front.

Here’s the background: When Mueller’s report was publicly released, key portions of its section related to Stone were redacted. But a close reading—which later would be backed up by evidence submitted at trial—indicated that during the 2016 campaign, Trump and top campaign officials, most notably, then-campaign chief Paul Manafort, tried to use Stone as a conduit to WikiLeaks to obtain inside information on what dirt Julian Assange’s site had on Hillary Clinton. The Mueller report alluded to a call Trump received at some point from Stone, in which the two discussed WikiLeaks’ plans. But it was unclear when this happened, and Stone’s name was redacted when the report was first released.

This topic was damning for Trump because it showed that he and his campaign had sought to get information from WikiLeaks through Stone while WikiLeaks was part of a Russian operation targeting a US presidential election. Stone’s lies to congressional investigators were designed to hide his efforts on behalf of Trump to make contact with WikiLeaks. And when Trump replied to written questions from Mueller—he refused to submit to an in-person interview with the special counsel—he claimed that he could remember no conversations with Stone about WikiLeaks. So neither Stone nor Trump would acknowledge Trump’s attempt to use Stone as a channel to or from WikiLeaks. The two were mounting a cover-up.

The joint Trump-Stone stonewalling was partially undone by Rick Gates, Trump’s deputy campaign manager, who cooperated with Mueller’s investigation and who was sentenced to 45 days in prison and a $20,000 fine for his part in a series of financial crimes and for lying to federal investigators. Gates told Mueller about Stone’s communications with Trump and the Trump campaign about WikiLeaks. (These were the bare-bones details in Mueller’s final report that were redacted at first.) Gates’ information did emerge during Stone’s trial, and these portions of the Mueller report were unredacted several weeks ago. One newly unredacted passage described Trump instructing Manafort to stay in touch with Stone about WikiLeaks and to keep Trump updated on this. But the cover-up mainly worked. Stone publicly declared, “I will never roll on Donald Trump.” And Trump saved Stone from prison.

Eisen’s book adds to what’s known about this skullduggery. Staffers for the House Judiciary Committee interviewed Gates last year, and Gates detailed one instance of Trump and Stone discussing WikiLeaks:

Gates told us he was with Trump in the summer of 2016 when longtime Trump friend Roger Stone called Trump and apparently told him that WikiLeaks would be releasing additional hacked emails…With the help of our Judiciary colleague Charlie Gayle, a smart, affable former prosecutor, we were able to establish the likely date of the call: July 25, 2016, just three days after the first WikiLeaks release of hacked DNC documents. Russia’s role [in the hacking] was already known. Gates described how in the mid-afternoon or early evening, he was riding with Trump in a Chevy Suburban from Trump Tower to LaGuardia Airport to board the campaign plane. They were still in Manhattan when Stone called Trump. Trump held the cellphone far enough away from his ear that Gates could see Roger’s number on the screen. Trump listened to Roger, got off the phone, and told Gates, “More information is coming”—clearly a reference to WikiLeaks. Just two days later, Trump would publicly holler, “Russia, if you are listening…”

This is a more specific recounting than what Mueller included in his report. The House staffers had established the date of Trump’s conversation with Stone. (It was previously reported that this call occurred on July 31, 2016.) And it is significant that the call occurred days after WikiLeaks dumped material stolen by Russian cyber-ops. With the hack already publicly linked to Moscow, Trump was privately trying to get inside information from WikiLeaks about the operation, as he was publicly encouraging Russian hackers to do more. This is what Trump and Stone wanted to hide—the appearance that Trump might have been attempting to collude with or take advantage of the Russia-WikiLeaks operation.

Mueller did ask Trump about this in a set of written questions. But in a written reply, Trump said, “I have no recollection of the specifics of any conversations I had with Mr. Stone between June 1, 2016 and November 8, 2016. I do not recall discussing WikiLeaks with him.”

Eisen believes that Trump lied to Mueller. He faults Mueller for not aggressively chasing Trump on this point:

Trump’s written answers to Mueller dealing with WikiLeaks are littered with “do not recalls”— fourteen of them. Maybe Trump had forgotten the Stone call, as implausible as that might seem…Either way, Mueller’s willingness to accept those answers instead of insisting on an in-person cross-examination was unconscionable.

If Trump had lied to Mueller, that would have been a crime. And commuting a prison sentence to reward a witness who would not cooperate with a federal investigation is another possible act of obstruction of justice. (Trump claims he commuted the sentence because he believed Stone had been treated “unfairly.”)

The Trump-Stone cover-up occurred in plain sight, and it worked. Trump and Stone never disclosed Trump’s attempt to use Stone as a link to WikiLeaks. And Stone, who lied to investigators and kept silent about the truth, escaped punishment. Yet Mueller did not clearly spell all this out for the public. As Eisen observes generally about the special counsel in his book, “Mueller brought us so close, and yet left us miles away.”