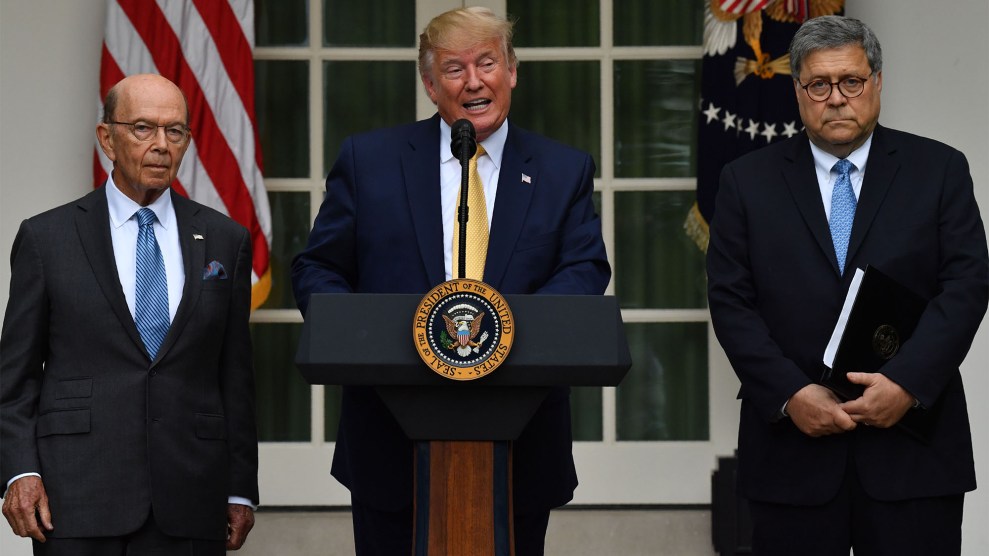 Donald Trump, flanked by US Secretary of Commerce Wilbur Ross and US Attorney General William Barr, delivers remarks on citizenship and the census in the Rose Garden at the White House in Washington, DC, on July 11, 2019. NICHOLAS KAMM/AFP via Getty Images

President Trump issued a memorandum on Tuesday attempting to prevent undocumented immigrants from being counted when determining congressional representation based on the 2020 census.

The directive, issued to the secretary of commerce, who oversees the Census Bureau, is almost certainly unconstitutional. The census is constitutionally mandated to count all people—regardless of citizenship or legal status—and the 14th Amendment requires that “representatives shall be apportioned among the several states according to their respective numbers, counting the whole number of persons in each state.”

The new memo claims that “the Constitution does not specifically define which persons must be included in the apportionment base,” but the language of the 14th Amendment has long been interpreted by the courts as requiring the counting of all individuals, including those who are undocumented, for purposes of congressional representation. And Congress, not the president, has final say over the conduct of the census. The ACLU has already said it will challenge the new order in court.

The memo is a new attempt to exclude immigrant communities from counting in the census, after the Supreme Court struck down the Trump administration’s attempt to add a question about US citizenship to the census in June 2019. Removing undocumented immigrants from the census process—either by scaring them away from filling out the 2020 census or by excluding them from the redistricting process—would shift economic and political power to whiter and more Republican areas that have fewer immigrants and people of color. The census determines how $1.2 trillion in federal funding is allocated and how political distracts are drawn for the next decade.

The order also goes against the positions of Trump’s own Justice Department. Alabama filed a lawsuit in federal court in 2018 trying to prevent undocumented immigrants from being counted in congressional apportionment, and the Justice Department intervened against the state, arguing that the case should be dismissed.

Even before the new executive order, the Trump administration was trying to exclude immigrant communities from counting toward political representation. After the Supreme Court blocked the citizenship question, Trump issued a separate executive order in July 2019 authorizing the Census Bureau to produce citizenship information based on government records, which states could then use to exclude those who aren’t eligible voters when new state legislative districts are drawn in 2021.

As I reported in the January/February edition of Mother Jones, such a move would exclude immigrants and children from counting toward state legislative apportionment, dramatically shifting power to the GOP:

Using the voting-eligible population as the metric for reapportionment could lead to half of all state legislative districts in the country being redrawn. Those new districts would exclude up to 55 percent of Latinos, 45 percent of Asian Americans, and 30 percent of African Americans from being counted as constituents—compared to 21 percent of white people, according to the Leadership Conference on Civil and Human Rights. As the group argued in a legal filing in 2015, “This would amount to a massive shift in political power away from groups that are already disadvantaged in the political process and further concentrate power in the hands of a white plurality that does not adequately represent the full diversity of the total population.”

But while states may have leeway in drawing state legislative districts, the law is quite clear that congressional districts must count everyone. Trump’s move seems less like a good-faith effort to change the law and more like yet another attempt to manipulate the census to benefit GOP interests and maintain white control over the political process.