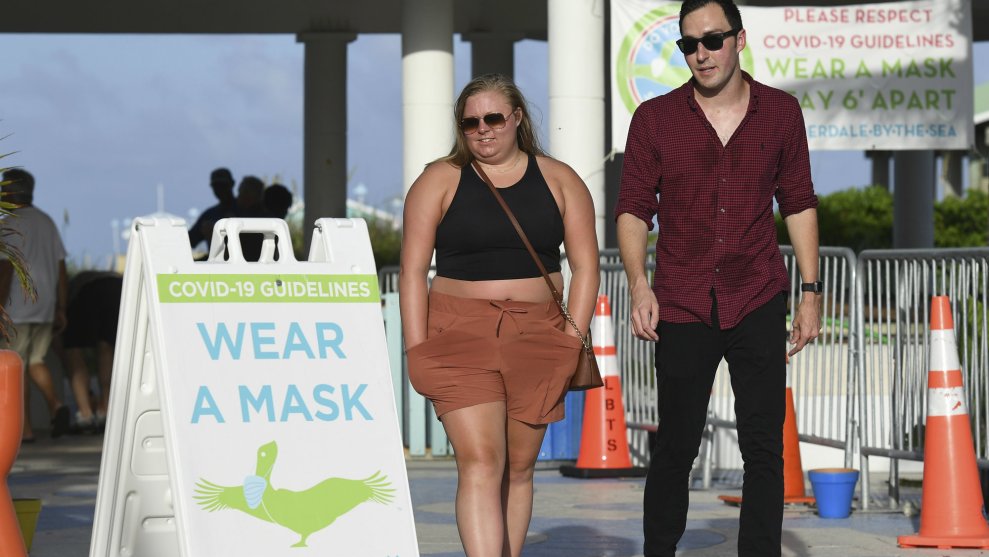 They’re everywhere these days—in our grocery stores, at our post offices, and attending our city council meetings. They’re furious and victimized by a great social injustice that has befallen this nation. Outraged white people are in full rebellion over mask mandates. And the self-professed victims have co-opted the racial justice movement to make their point.

It is a movement grounded in the history of this country’s systemic persecution of Black people and other people of color. Over Memorial Day weekend, George Floyd, a Black Minneapolis man, cried out for his mother and said he couldn’t breathe while white police officer Derek Chauvin pressed his knee into his neck for nearly nine minutes. It sparked a nationwide protest movement, but it was far from the first time a cop had killed someone who was gasping for air. In 2014, Eric Garner was killed by New York City police officer Daniel Pantaleo who put him in a chokehold and ignored his dying words: “I can’t breathe.” In fact, the New York Times found 70 cases in the last decade where individuals died in police custody after crying out for air. The tragic phrase has become a rallying cry, splashed on posters at protests and across the chests of celebrities.

And now it has become part of the rallying cry of white people who object to the public health effort to slow the spread of COVID-19. Some states and localities immediately implemented rules requiring the wearing of masks, while others floundered. Officials have reassured anyone who would listen that even though wearing a mask can be a little uncomfortable, it doesn’t inhibit breathing. Nonetheless, almost immediately, the mask mandates turned into a new front in the culture war. Only liberal sheep wore masks to protect the public from coronavirus; real conservatives and libertarians would never stoop to something so feminine and weak! Just look at the president! Meanwhile, as the coronavirus has surged in the South and West, so too has the intensity of the mask war. The anti-mask cohort has adopted a slogan they saw was very effective, insisting that when wearing a mask, they can’t breathe.

I put on a mask and literally within seconds, I am struggling to breathe.

Just look at last week’s county commission meeting in Palm Beach, Florida, where coronavirus infections have been rising rapidly. One woman claimed commissioners seeking a mask mandate were doing the devil’s work. Another woman said she doesn’t wear a mask for the same reason that she doesn’t wear underwear: “Things need to breathe.” Still another resident claimed wearing a mask would “throw God’s wonderful breathing system out the door.”

But this movement is not limited to conservative enclaves in Florida. Three-thousand miles away, a white woman went on a tirade in a Southern California Trader Joe’s grocery store after being asked to leave because she was not wearing a mask.

“That man harassed me for not wearing a mask,” the woman says in the video. “I have a breathing problem, my doctor will not let me wear a mask. So anyone harassing me to wear a mask, you guys are violating federal law.” It does not seem to have occurred to her to simply find someone else to shop for her or order her groceries. The logic of the masks being that they protect others.

Last month in Montgomery, Alabama, city council members debated an ordinance that would require residents to wear masks in public places. While white council members rebuffed the idea because it would be hard to enforce, Dr. William Salinsky described the scene at his hospital, saying that 90 percent of patients on ventilators, unable to breathe on their own, were Black. A member of the audience, a Black man, said he had lost six family members to the disease already. Do Black lives matter to the city council of Montgomery, Alabama?

Man speaking now says he’s lost six family members during the pandemic. “The question on the table is whether black lives matter.” pic.twitter.com/lXGcO8bKJy

The mask ordinance vote failed, but Mayor Steven Reed implemented it by executive order the next day. It takes an incredible amount of privilege and stunning lack of self-awareness to complain about breathing in this country. Who is really struggling to breathe?

For communities of color, struggling to breathe is nothing new. Black people are more disproportionately affected by COVID-19 because, as my colleague Edwin Rios wrote, racism is a pre-existing condition. But the inability to breathe is not restricted to the coronavirus and police brutality. By design, Black and brown neighborhoods suffer from more air pollution than wealthier, white neighborhoods. A 2017 study found that Black people are 75 percent more likely to live near toxic and oil and gas facilities. More than 1 million Black people live within half a mile of an oil or gas facility and face serious health risks like asthma and other respiratory diseases.

All of a sudden, it seems as if the struggle to breathe is everywhere. In April, I found out my uncle, my father’s 79-year-old brother in Brooklyn, died from COVID-19. I happened to be on the phone with my mom. After she told me the news, she paused mid-sentence to say something to my father who I could only hear faintly in the background. Then she said she’d call me back. I hung up the phone, sobbing and gasping for air.

As I see the maskless people insisting on their right to breathe, I am struck by the irony of how, I too, was struggling to breathe, and how that fact was lost on me until now. I imagine that’s how other Black people feel, constantly fighting to breathe after another knee plants on our necks, or when someone we love is admitted to the ICU, or as we encounter one of the other million little ways this country sucks the breath out of us.

So, before you launch into a public temper tantrum about your alleged breathing troubles because of wearing a mask, take a look around. You’re actually breathing just fine.