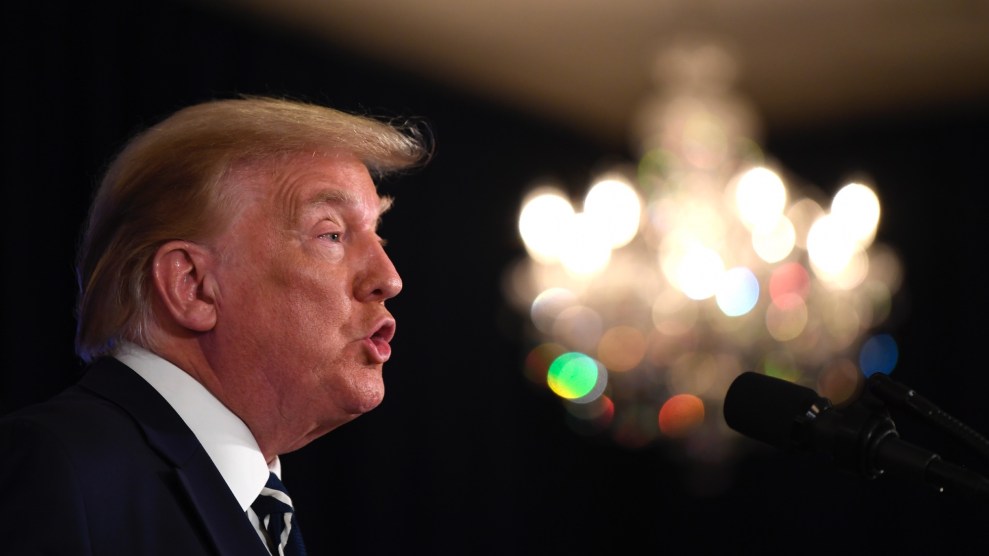 On Saturday, President Donald Trump held a press conference at his New Jersey golf course to sign a series of executive actions relating to the coronavirus pandemic. They would in his characterization, extend a moratorium on evictions, freeze payroll taxes, and provide a $400-a-week unemployment benefit for people who have been laid off during the pandemic. Democrats were opposed to the $400-a-week payment, Trump said, which is technically true, inasmuch as Democrats actually wanted it to be $600. Saturday’s action came after the Trump administration, Senate, and the House, deadlocked over the terms of a coronavirus relief package. Trump called the executive order and memos “bills,” but it is very significant that they are not—it’s possible he’ll face legal challenges for overstepping his own authority. After all, can a president really just…cancel taxes?

Presidents aren’t supposed to just campaign like this on the job.

What was notable, also, was what Trump didn’t decide to do with powers he may or may not have. There was no additional funding for school reopening, and no second round of stimulus checks to Americans—but he did talk up the possibility of cutting capital gains taxes, in case you wanted to feed your family with those. To pay for the unemployment extension—which is really a massive, 33 percent cut to what people are getting currently—he diverted money from disaster-relief assistance. Deferring payroll taxes (and Trump said he would eventually “terminate” them) means, in real terms, cutting off a funding source of Social Security and Medicare. Inasmuch as it was a statement of values, it was revealing one.

But Trump made little effort to hide the true purpose of both the hastily scheduled event and the papers he was there to sign: It was a campaign rally. Repeatedly during his remarks, he launched into attacks against former vice president Joe Biden, the presumptive Democratic nominee, and presented the orders he was signing in deliberately electoral terms.

Take the payroll tax freeze. “If I’m victorious on November 3rd, I plan to forgive these taxes and make them all permanent,” he said. “Now, Joe Biden and the Democrats don’t want that.” If Biden wins, he warned, “They’ll have the option of taking this all away…but if I win, I may extend and terminate it.” Your call!

“Biden probably won’t be doing that,” he continued. “You’ll have to ask him. I don’t think he knows what he’s doing.”

Later he talked up the stock market, but warned that whatever gains had been made under his tenure would go away if he lost. “I hope you have confidence in your president, and confidence that he’ll be re-elected,” he said. Otherwise, Trump declared, the stock market might crash.

“Sleepy Joe Biden wants to rip the wall down,” Trump said, referring to the construction of the border fence, something that has nothing to do with coronavirus relief, but a core part of every Trump campaign stump speech. At another point, he said that “Biden is totally supported by the Bernie Sanders wing of the party, and as a matter of the fact, he’s gone further left than Bernie.” This would be welcome news for Sanders supporters if true. (It is not.)

The pandemic shut down Trump’s stadium rallies (and the sputtering attempt in Tulsa discouraged his campaign from even trying), but in its content and stagecraft, it was obvious this event was some kind of heir. For the second consecutive day, Trump even invited supportive members of his golf club to attend—and cheer—as he spoke to the cameras. Dubbed as a press conference, he cut off questioning after just a few minutes, and it ended with the audience cheering as he sparred with the media. It sounded like one of his rallies.

Video of the exchange. Notably it’s another example of Trump getting so agitated by a female reporter that he abruptly cuts off news conference. https://t.co/G1Mx2z3dgT pic.twitter.com/CvXn07uGOK

It’s worth stepping back every now and then and acknowledging how not normal this is. Presidents aren’t supposed to just campaign like this on the job. Turning official White House business into a re-election rally—particularly a special rally, at your own golf course, for people who pay you for access—is using taxpayer money for personal use. That’s corruption. Just last week, the Washington Post reported that the president was considering giving his Republican National Convention speech directly from the White House lawn. For years, good-government types have lamented the decline of publicly funded campaigns. Well, you’re funding this one. Be careful what you wish for, I guess.