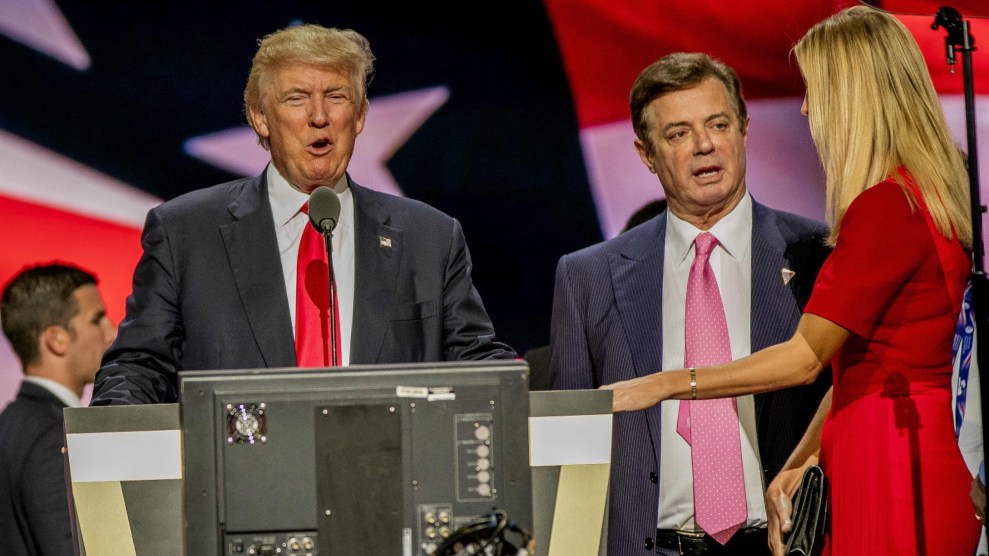 During the 2016 presidential race, while Vladimir Putin attacked the election in part to help Donald Trump, there was a “direct tie between senior Trump Campaign officials and the Russian intelligence services.” This damning statement comes from a long-awaited bipartisan Senate Intelligence Committee report released on Tuesday morning. The report, 966-pages long, is the final volume resulting from the committee’s investigation of Russian intervention in the 2016 campaign. It is full of revelations and findings that make clear that there is no Trump-Russia “hoax” and that Trump and his campaign aided and abetted Moscow’s assault on American democracy and sought to exploit it.

The report also explores the question of whether Russian intelligence developed blackmail material on Trump, revealing new information on this dicey subject but without reaching a conclusion.

A good chunk of the report is dedicated to Paul Manafort, who was a senior Trump campaign official for about five months in 2016. The committee notes that Manafort, who was imprisoned in 2018 for committing fraud and money laundering, posed a “grave counterintelligence threat” due to his Russian connections. The report details his extensive dealings during the campaign with a former business associate named Konstantin Kilimnik, who the committee describes as a “Russian intelligence officer.” (Special counsel Robert Mueller characterized Kilimnik as an “associate” of Russian intelligence.) The committee puts it bluntly: “Kilimnik likely served as a channel to Manafort for Russian intelligence services.” Throughout the campaign, according to the report, Manafort “directly and indirectly communicated with Kilimnik,” Russian oligarch Oleg Deripaska, and several pro-Russian oligarchs in Ukraine:

On numerous occasions, Manafort sought to secretly share internal Campaign information with Kilimnik. The Committee was unable to reliably determine why Manafort shared sensitive internal polling data or Campaign strategy with Kilimnik or with whom Kilimnik further shared that information. The Committee had limited insight into Kilimnik’s communications with Manafort and into Kilimnik’s communications with other individuals connected to Russian influence operations, all of whom used communications security practices.

So their conversations were hush-hush.

The report continues: “The Committee obtained some information suggesting Kilimnik may have been connected to the [Russian intelligence’s] hack and leak operation targeting the 2016 U.S. election.” Whoa. This report is saying that Trump’s campaign manager was in close contact with a Russian intelligence officer who might have been tied to Putin’s covert attack on the 2016 campaign to help elect Trump. Moreover, the report reveals that the committee found “two pieces of information” that “raise the possibility” that Manafort himself was connected “to the hack-and-leak operations.” The report’s discussion of that information, though, is redacted. Whether this counts as collusion or not, it’s a big deal.

Manafort, according to the committee’s investigation, also explored using his access to Trump to help advance Russian interests. He discussed with Kilimnik promoting a pro-Russia “peace plan” for Ukraine that would have entailed creating an autonomous zone in eastern Ukraine, a scheme Manafort knew would offer a “‘backdoor’ means for Russia to control eastern Ukraine,” the report says. Manafort understood that Kilimnik had cleared the plan with “someone in the Russian government.” Why was Manafort willing to assist a move seemingly at odds with US interests? “Manafort could benefit financially,” the committee explains.

The picture gets worse for the Trump-Russia truthers. Manafort, the report says, “worked with Kilimnik starting in 2016 on narratives that sought to undermine evidence that Russia interfered in the 2016 U.S. election.” That is, Manafort helped Russia cover up its attack. And it wasn’t just Manafort. The committee states, “The Trump Campaign publicly undermined the attribution of the hack-and-leak campaign to Russia and was indifferent to whether it and WikiLeaks were furthering a Russian election interference effort… The Campaign was aware of the extensive media reporting and other private sector attribution of the hack to Russian actors prior to that point.” So though the committee found no evidence that Trump and his crew engaged in a criminal conspiracy with Moscow, it has concluded that Trump, Manafort, and others aided and abetted the Russian assault by denying or dismissing its existence. This is not a new observation, but it is an important point that has often been drowned out by Trump’s shouts of “no collusion.”

The report’s findings show that the FBI and CIA were right to be alarmed by contacts between Russians and the Trump campaign (this included interactions beyond Manafort’s) and that the bureau was justified in opening up an investigation in mid-summer 2016. As the report puts it, “Taken as a whole, Manafort’s high-level access and willingness to share information with individuals closely affiliated with the Russian intelligence services, particularly Kilimnik and associates of Oleg Deripaska, represented a grave counterintelligence threat.”

The Senate Intelligence Committee’s release contains other eye-popping material. In a section on Russian kompromat—the use of compromising material—the committee explores several allegations that Russian intelligence had developed blackmail on Trump based on his personal conduct during trips to Russia. The report goes far beyond the infamous “pee tape” rumor. It states that Trump “may have” begun a short affair with a Russian woman during a 1996 trip to Moscow—without reaching a firm conclusion. And it reports that the committee spoke with a Marriott International executive who said he’d heard two colleagues discuss the existence of a video showing Trump in the elevator of the Moscow Ritz-Carlton with “hostesses” during a 2013 visit there. But the two other executives denied any such discussion. The committee said it could not resolve the matter.

The committee’s report includes plenty of information to inconvenience Republicans and conservatives who have tried to erase the Trump-Russia scandal. It shows that Donald Trump Jr.—and possibly Manafort and Jared Kushner—deliberately tried to collude with a secret Russian government effort to boost the Trump campaign. (“The Committee found evidence suggesting that it was the intent of the Campaign participants in the June 9, 2016 [Trump Tower] meeting, particularly Donald Trump Jr., to receive derogatory information that would be of benefit to the Campaign from a source known, at least by Trump Jr. to have connections to the Russian government.”) The report suggests that Trump Jr. knew that Michael Cohen, Trump’s personal lawyer, had lied to Congress about Trump’s efforts to secretly score a big Moscow tower project while he was campaigning for president. It also states that Putin “almost certainly” knew of this project—meaning that the Russian leader possessed information that he could have leaked to embarrass Trump during the campaign. The report reveals that Trump Jr. would only submit to an interview with the committee after he learned he might be held in contempt.

The committee describes how Trump and his campaign used Roger Stone to try to get inside information they could exploit on the Russia-WikiLeaks operation. (Trump likely lied about this to Robert Mueller—which could be a crime—and the committee report, approved by Republicans and Democrats, strengthens the case against Trump. Actually, it nails it.) The report notes that in the summer of 2016, Carter Page, then a foreign policy adviser for the Trump campaign, met in Moscow with a person who presented “counterintelligence concerns” and that Page did not explain to the committee all his actions while in the Russian capital.

The report does reaffirm there were serious problems with the FBI’s surveillance of Page and the bureau’s use of the Steele Dossier to obtain a search warrant for Page after he had left the Trump campaign. Naturally, Sen. Marco Rubio (R-Fla.), the acting chair of the committee, fixated on the report’s findings regarding the FBI and the Steele memos, long a hobbyhorse of the right and Trump. He sidestepped the most significant aspects of the investigation: Trump’s campaign was run by a counterintelligence threat, and Trump and his lieutenants assisted a foreign adversary’s attack on the United States. These are truths that Trump and his enablers with the GOP and the conservative movement cannot handle. And the report discloses a related truth they largely wish to ignore: Russia is currently intervening in the 2020 election to help Trump.

The end of the report includes a statement from Sen. Ron Wyden (D-Ore.), a committee member, who maintains that the report excessively redacted material and did not go far enough. He writes, “The Committee investigated interactions between Donald Trump and particular Russians and identified deeply concerning financial links, it did not seek to answer key questions about Donald Trump’s finances that relate directly to counterintelligence. In short, the Committee did not follow the money.” Wyden alleges that information on this front “and other revelations in the report suffice to establish that Donald Trump poses a counterintelligence threat to the United States.”

He asserted that the committee blocked the release of key information about Manafort:

Information related to Manafort’s interactions with Kilimnik, particularly in April 2016, are the subject of extensive redactions. Evidence connecting Kilimnik to [Russian intelligence’s] hack-and-leak operations are likewise redacted, as are indications of Manafort’s own connections to those operations. There are redactions to important new information with regard to Manafort’s meeting in Madrid with a representative of Oleg Deripaska. The report also includes extensive information on Deripaska, a proxy for Russian intelligence and an associate of Manafort. Unfortunately, much of that information is redacted as well.

Wyden also points out that the committee blocked information on the role of “Russian government proxies and personas in spreading false narratives about Ukrainian interference in the U.S. election. This propaganda, pushed by a Russian intelligence officer and other Russian proxies, was the basis on which Donald Trump sought to extort the current government of Ukraine into providing assistance to his reelection efforts and was at the center of Trump’s impeachment and Senate trial.”

Perhaps most serious, Wyden charges that the “report includes redacted information that is directly relevant to Russia’s interference in the 2020 election.” So the American public is not being given information regarding the security of the 2020 election and Putin’s ongoing effort to assist Trump. Without that—even after nearly 1,000 pages—the whole story is still not being told.