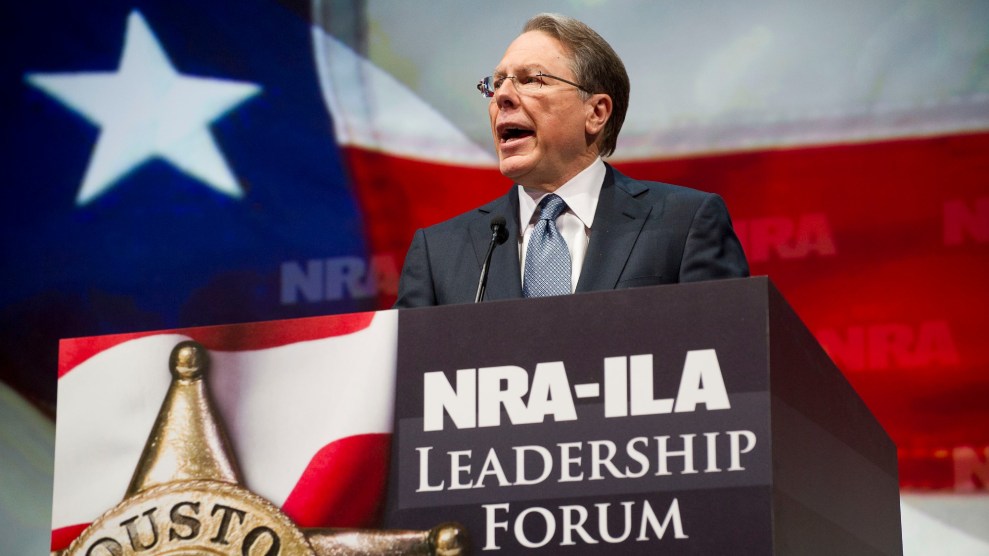 New York state Attorney General Letitia James (D) on Thursday filed a lawsuit charging the National Rifle Association with financial misconduct and seeking to dissolve the organization. The NRA “has persistently engaged in illegal and unauthorized activities in the conduct and transaction of its business,” James alleged in the complaint. For more than a year, James’ office has been investigating the NRA’s nonprofit status, after the group’s inner turmoil and allegations of financial impropriety spilled into public view in 2019. During a press briefing announcing the lawsuit, James said that misconduct at the NRA “is so broad” that a total dissolution of the nation’s oldest gun rights group is necessary.

The groundbreaking lawsuit takes aim at the NRA as a whole but also names four current and former members of its leadership team—Executive Vice President Wayne LaPierre, former Treasurer Wilson “Woody” Phillips, former Chief of Staff Joshua Powell, and General Counsel John Frazer. In a statement, James said these individuals were personally responsible for mismanaging the organization’s funds and “failing to follow numerous state and federal laws.” The lawsuit details dozens of examples of the defendants allegedly using millions of dollars in NRA funds for exorbitant personal purposes—including for trips for their families to the Bahamas, private jet travel, and expensive meals. In one instance detailed in the lawsuit, the NRA’s director of security “procured an armored vehicle for LaPierre without notifying the Purchasing Division or complying with the NRA Purchasing Policy.”

“The NRA’s influence has been so powerful that the organization went unchecked for decades while top executives funneled millions into their own pockets,” James said in her statement. “The NRA is fraught with fraud and abuse, which is why, today, we seek to dissolve the NRA, because no organization is above the law.”

In response, the NRA said Thursday that it had filed a countersuit against the New York attorney general. “The NYAG’s actions are an affront to democracy and freedom,” LaPierre said in a statement provided to Mother Jones. “This is an unconstitutional, premeditated attack aiming to dismantle and destroy the NRA—the fiercest defender of America’s freedom at the ballot box for decades. The NRA is well governed, financially solvent, and committed to good governance. We’re ready for the fight. Bring it on.”

In a statement provided to Mother Jones, NRA board member Tom King blamed New York Gov. Andrew Cuomo (D) for James’ lawsuit, despite the fact that the New York attorney general operates independently of the governor. “I was told Cuomo would use every resource to pursue his lifelong dream of defeating the NRA, and an ‘investigation’ of our Association was on the horizon,” King said.

The dam broke for the NRA in April 2019, just before its annual meeting and convention in Indianapolis, when the New Yorker and The Trace published a bombshell report detailing alleged self-dealing, gratuitous spending, sweetheart deals, and other financial improprieties among the group’s executives, contractors, and vendors. At the meeting, then–NRA president Oliver North—of Iran-Contra fame—unsuccessfully tried to force LaPierre’s resignation over the latter’s handling of the group’s finances. The NRA board—including members who were allegedly secretly benefitting from NRA funds—stood behind LaPierre and instead forced North’s resignation. North then leaked financial documents in an effort to expose self-dealing and misuse of NRA money. That sparked James’ investigation into the group, as well as calls from House and Senate Democrats for the IRS to revoke its nonprofit status.

James wasn’t the only official to sue the NRA Thursday. Washington, DC, Attorney General Karl Racine filed a complimentary lawsuit against the group, accusing it of misusing its charitable funds to support wasteful spending by its executives. Racine’s lawsuit alleges that the NRA Foundation—the group’s tax-exempt charitable arm established to issue grants to outside entities like ROTC programs and the Boy Scouts of America—was, in fact, used to funnel money into the main NRA organization, including a $5 million dollar loan that the NRA never repaid. Racine’s lawsuit seeks the return of “the charitable funds improperly wasted on the NRA to the Foundation and a court order imposing changes to the Foundation to ensure it is operated independently and fulfills its charitable purposes,” Racine’s office said in a statement.

The pair of lawsuits marks a new low point for the 148-year-old gun-rights organization, which has long exerted outsize influence in American politics. In 2016, the group spent an eye-popping $54 million backing GOP candidates, $31 million of which directly supported Donald Trump’s campaign. But the group has been suffering ever since, thanks to its recent scandals, which contributed to a sharp decline in membership.

“Tens of millions of Americans have at one time or another joined the NRA to protect their Second Amendment rights,” says Richard Feldman, a former lobbyist for the NRA and president of the Independent Firearm Owners Association. “The squandering of members’ resources for the benefit of a few insiders has been known for years, but overlooked in the interests of power, prestige and politics.”

After it proved to be such a powerful ally to Trump in 2016, there’s been much speculation about the role that the NRA might play in the president’s reelection efforts. With less than 100 days until the election in November, the group has spent just $900,000 on federal elections this cycle—a drop in the bucket compared to the pro-gun-control group Everytown for Gun Safety, which had earlier pledged to spend a whopping $60 million.

Earlier on Thursday, the Washington Free Beacon reported that the NRA is, in fact, planning to spend “tens of millions” to support Trump’s reelection and pro-gun Republican candidates in key battlegrounds. But with a series of pricey lawsuits on its hands and a precarious financial situation, it remains to be seen whether the group will be able to replicate the massive campaign it waged four years ago.

You can read the full lawsuit here: