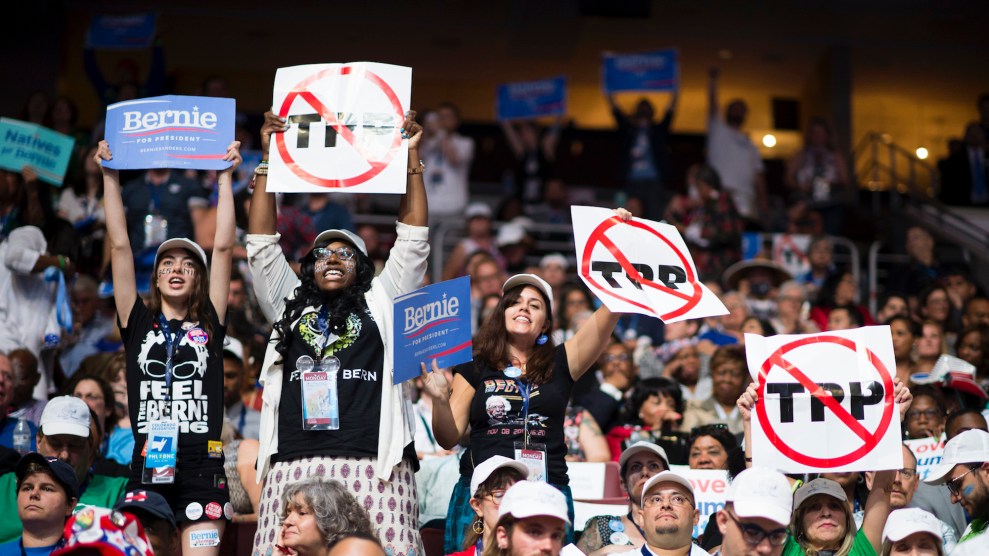 Had Democrats descended upon Milwaukee for their party’s convention as they’d originally planned, there would, without question, have been protests. Demonstrators would have likely demanded Joe Biden adopt Bernie Sanders’ single-payer health care proposal, or perhaps pushed the former vice president to end Democrats’ unqualified support for Israel. In between the speeches and pageantry, some delegates would clog up the dozens of caucus meetings to push for a Green New Deal. And when Biden officially accepted the Democratic nomination, a sea of “Medicare for All” signs might have been hoisted high above the heads of more than 1,000 delegates attending the convention on Sanders’ behalf.

“I don’t think too many people want to get marked as having done stuff to harm the efforts to defeat Donald Trump.”

There will, of course, be no mass gathering in Milwaukee next week. Democrats canceled the majority of planned events, and Biden has declined to travel to Wisconsin. The Sanders wing of the party will have little representation at the now-virtual gathering: Only Sanders and his surrogate Rep. Alexandria Ocasio-Cortez (D-N.Y.) have been invited to speak—and Ocasio-Cortez has only been given a minute at the lectern. The event will include “live and curated content” from all 57 US states and territories, according to a DNC spokesperson. But whatever form that takes will afford little opportunity for the 27 percent of delegates amassed by Sanders to register any lingering dissatisfaction with Biden’s candidacy and the Democratic Party.

And that’s disappointing to some Sanders supporters, a dozen of whom spoke with Mother Jones about the upcoming convention. “It was hard enough to do anything influential at an in-person convention,” says Mark Malouf, a Sanders delegate from California who also attended the 2016 convention. “A lot of people feel like, with this all being online, we’re being told to sit down and shut up.”

The display from many Sanders backers at the 2016 convention could fairly be described—in the words of two 2016 Sanders delegates I spoke with—as a “shitshow.” Disappointed by Hillary Clinton’s nomination and enraged over a WikiLeaks email dump that showed some DNC officials had disparaged Sanders during the primary campaign, Sanders delegates interrupted nearly all of the speeches with jeers and chants.

Sanders supporters from the California delegation instigated much of the chaos. “It didn’t matter if it was the president of Planned Parenthood or John Lewis—you had people screaming at them,” recalls Malouf, who joined his delegation in booing Clinton’s running mate, Tim Kaine. “I felt like that made us look really bad and gave what some in the media were looking for: To make us look ridiculous and then write us off as a bunch of dewy-eyed radicals.” Before he took the stage to speak in 2016, Sanders convened a meeting with his delegates to tell them, in essence, to knock it off.

The Sanders campaign aimed to quash those antics this time around. In May, it asked delegates to sign a code of conduct in which they promised to engage with their fellow DNC attendees “with respect and a spirit of cooperativeness, even if I disagree with them.” But even without the agreement, Sanders supporters told me they weren’t seeking an encore performance. “I don’t think too many people want to get marked as having done stuff to harm the efforts to defeat Donald Trump,” says Alan Minsky, the executive director of the Progressive Democrats of America and a Sanders delegate from California. “I’m not hearing a lot of people making the claims we heard last time.”

Some would wonder whether they would even need to. In 2016, Sanders remained in the primary until the bitter end mainly to make a point: Delegates would be the only way for the outsider to have a say in the party’s direction. This cycle, Sanders opted for the inside route: He suspended his campaign as soon as his path to the nomination became impossible and sent aides to negotiate favorable terms of surrender. That resulted in the “unity task forces” in which Sanders and Biden allies jointly developed policy recommendations for the former vice president and the DNC platform.

Thanks in part to those efforts, Biden is now running on the most progressive presidential platform in modern history. The draft DNC platform, which delegates are voting on this week, includes its first-ever nod to Medicare for All, noting that Democrats “welcome advocates” who support the single-payer approach. The DNC rules committee voted unanimously to extend a 2018 provision that limits the powers of superdelegates, a win for the Sanders allies who now serve on the DNC. “We’re in a much better position today than we were in 2016,” says Yasmine Taeb, a DNC member and Sanders supporter from Virginia. “We’re able to advise the Bernie supporters on the outside.”

In a video call with delegates late last month, Sanders urged them to join him in uniting behind Biden—while continuing their efforts to push the Democratic establishment to the left. Some of his most vocal backers have gone less quietly. Former Ohio state senator and Sanders campaign co-chair Nina Turner slammed the policy task forces for “pretending like it’s kumbaya” while leaving out Sanders’ top priorities, such as Medicare for All. Progressives, she told Yahoo News last month, must be prepared to not give Biden’s would-be administration “a moment’s rest.” And all those insider gains Sanders and his DNC-serving supporters have made haven’t necessarily translated into trust among his delegates broadly. “Many still see the DNC as being completely and totally full of loyalists to Hillary,” Taeb says.

Norman Solomon, a Sanders California delegate and national director of Sanders-aligned RootsAction.org, says “a lot of activists have stepped up to fill the gap” after Sanders decided against a prolonged campaign to amass as many additional delegates as possible. The nature of any planned protests had to be overhauled once the convention went digital. The focus, Solomon says, has been on Medicare for All—“not just espousing it, but by tangibly fighting in the convention context to assert the need for it,” he says. Sanders supporters argue that the idea is not only popular among Democrats, but that present circumstances demand it. “We’re in the midst of a pandemic and millions of Americans have lost jobs,” Rep. Ro Khanna (D-Calif.), a national co-chair of Sanders’ campaign, tells me. “There should be a moral imperative for Medicare for All.”

Biden disagrees. He supports adding a public option to Obamacare and expanding Medicare to people as young as 60, but he has repeatedly he criticized Sanders’ plan as too costly and unrealistic, even as recently as July. A petition organized by Sanders’ Nevada delegation asks delegates to vote against the DNC platform unless it explicitly includes Medicare for All. More than 800 delegates, including Khanna, have signed on.

Sanders delegates from California have also organized a “shadow convention” to draw attention to Medicare for All, the Green New Deal, and criminal justice reforms that Biden has not yet committed to. The agenda includes streamed speeches from progressive leaders as well as in-person events, such as a car caravan around Disneyland to demand Medicare for All and a socially distanced rally at a state prison.

Those efforts are an attempt to “reframe” the convention away from a message of “it’s simply time to get in line,” Solomon says. “Progressives didn’t win this nomination fight, but we recognize the progressive fight is 24/7, 365.”

But other Sanders delegates aren’t sure this is the right forum for that fight. “Would I rather have our platform speak unequivocally in support for Medicare for All or Palestine? Absolutely. Will I vote against the platform because of that? I don’t think so,” says Ray McKinnon, a DNC member and Sanders supporter from North Carolina.

McKinnon, who is Black, worries that too much division at this crucial moment could be especially dangerous for Americans of color. “Folks who are not going to bear in their bodies the consequences of four more years of Donald Trump seem to be the loudest,” he says. “We need to stop talking about the luxury of a protest vote.”