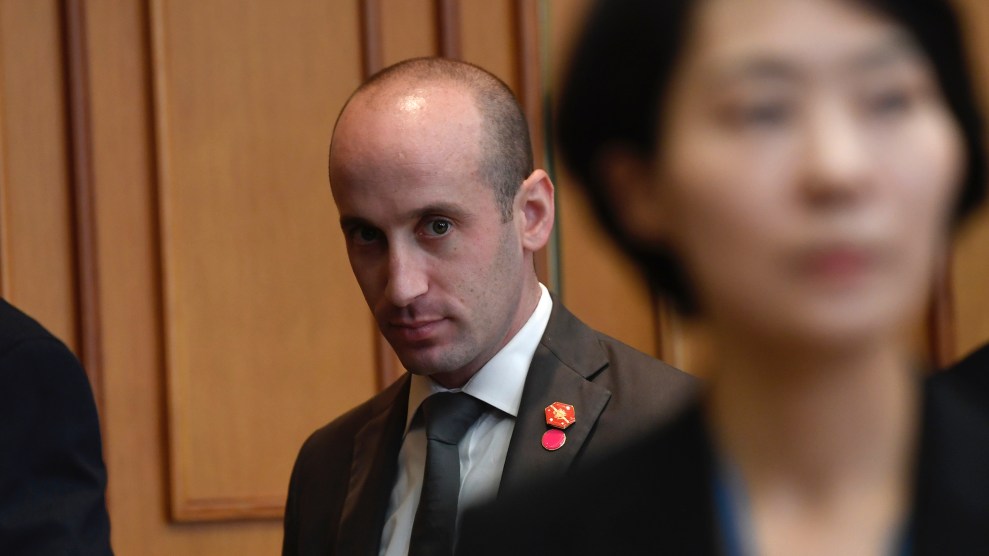 In 1932, a judge rejected Nison Miller’s US citizenship application on the grounds that he was ignorant. A few generations later, Nison’s great grandson, Stephen, would complain about a Latina housekeeper dropping him off at middle school in her cheap car. It made him “look poor,” Miller told his friend Jason Islas.

Soon after, Miller told Islas they couldn’t be friends anymore. Miller explained the decision by attacking Islas’ height, bad skin, lack of confidence, and Mexican American heritage. “What he targeted was, looking back, an impressive feat of understanding what I didn’t like about myself,” Islas told Jean Guerrero, an investigative journalist who recently worked as a border reporter for KPBS in San Diego, two hours south of where Miller grew up. “It was the opposite of empathy.”

Hatemonger, Guerrero’s new biography of Miller, portrays the adolescent Stephen as a racist and retrograde troll determined to entertain and offend in pursuit of the spotlight. He boasted about saying things that “no one else in their right mind would,” demanded that Latino classmates “speak English,” encouraged students to litter because that’s what janitors were for, and considered himself classy all the while. It should be no surprise that Miller would later see a kindred spirit in Donald Trump.

After serving as a speechwriter and campaign warm-up act for Trump, Miller is now a senior White House policy adviser. Miller is the closest aid to Trump who isn’t family, and he uses that power to exert almost complete control over the president’s immigration agenda. James Nealon, a former ambassador to Honduras, told Guerrero, “He is by far the most successful bureaucrat that I’ve ever experienced.”

What sets Miller, now 34, apart from Trump is that he has the work ethic and attention to detail to ensure that suffering is actually inflicted upon immigrants. Trump obsessed over what color to paint the border wall; Miller has now blocked nearly all immigration. He shows what Trumpism looks like when bolstered by competence.

But early in life, before he had a bureaucracy at his disposal, he looked a lot like the president as a younger man. Miller’s paternal grandparents settled in Los Angeles, where his grandfather, Jay, made a small fortune in real estate and law. Like the Trumps, Jay and Miller’s father, Michael, wound up getting sued for deceitful financial practices at their real estate company but never really paid a price. (Jay and his wife’s estate included artwork by Pablo Picasso and Marc Chagall.)

On his mom’s side, Miller’s great-great-grandfather came from an Eastern European village beset by poverty and pogroms. A rabbi urged them to seek refuge in America, and they arrived at Ellis Island four decades before Nazis killed nearly all the Jews who remained behind. Stephen’s mom ended up studying social work at Columbia. The liberal enclave of Santa Monica was a natural place for the Millers to end up.

Miller has said his turn to the right began in seventh grade with a subscription to Guns & Ammo magazine. The red-pilling led him to Rush Limbaugh and his ilk. By high school, Miller was the campus racist. Maria Vivanco, the head of the high school’s chapter of MEChA, a Chicano student group, remembers Miller telling her to go back to her country. (She was born in Santa Monica.) Oscar de la Torre, a school board member, recalls Miller showing up at planning meetings, attacking Santa Monica’s diverse but deeply unequal high school for fighting what Miller claimed was nonexistent racism, then immediately leaving. “It was wickedness,” he told Guerrero. “He was born with an ability to bring out anger from people, and he rejoiced in that, it made him powerful.”

As with Trump, Miller’s willingness to flout liberal norms made him an object of fascination. A friend of Miller told Guerrero that Miller’s outfits were sometimes inspired by Sam “Ace” Rothstein, the mob associate played by Robert De Niro in Martin Scorsese’s Casino. In an April Fools’ Day edition, the school paper parodied his voice in an article celebrating a decision to cancel an event where people sold foreign food. “[Santa Monica high school] is much better off without that gross display of multiculturalism encroaching on pure American values,” it read. “The iron fist of ethnic culinary domination has held this school in its vice-like grip for too long.”

Miller gained broader notoriety in Los Angeles by calling into to a right-wing radio show. Miller’s rants caught the attention of David Horowitz, a onetime Marxist who later wrote the book on how to troll campus liberals. He saw an acolyte in Miller, who brought him to speak at his high school and later at his college.

In high school, Miller unsuccessfully ran for student announcer, telling his classmates in his campaign speech that he was “sick and tired” of picking up trash when janitors were paid to do it for him. As a freshman at Duke, according to Guerrero, Miller left garbage strewn across the floor of his dorm after he missed the trash can. When a student asked if he was going to pick it up, Miller asked, “What hellhole are you from? We have people here for that.” The common room got so messy that students were temporarily banned from it. Miller wrote a two-page response that blamed the janitors.

Still, no matter how poorly he behaved, he fashioned himself a gentleman. In the college paper, he lamented the lack of a “mahogany and leather” smoking room in which he could “recreate and relax.” He liked to wander around in a terry-cloth robe drinking scotch. He valued leather-bound books and hoped to become a US senator. (Miller recently married Katie Waldman, who, apart from defending family separations at the border, is from the more Republican-friendly state of Florida.)

After college, Horowitz got Miller a job in Washington as a press secretary for Michele Bachmann, the flamboyantly right-wing congresswoman from Minnesota. Later, he handled communications for Sen. Jeff Sessions of Alabama. It was in Sessions’ office that he gained his immigration expertise. Republican leaders had concluded from Mitt Romney’s loss in 2012 that the party needed to court Latino voters. Miller and Sessions took the opposite view, deciding that the path to victory lay in further demonizing immigrants to win over white-working class voters. Miller devoted himself to studying the intricacies of immigration law to find ways to help sink the bipartisan 2013 immigration bill.

In 2o14, Miller saw Trump telling Steve Bannon’s Breitbart that Republicans wouldn’t beat Hillary Clinton by defending immigration. Miller emailed the interview to friends, adding that he hoped Trump would run for president. After joining his campaign, Miller put policy behind Trump’s calls to build the wall. In the White House, he helped write the anti-Muslim travel ban Trump issued his first week in office. Courts blocked the initial ban, just like the family separation policy Miller later pushed and other anti-immigration efforts he undertook early in the Trump presidency. But Miller found new ways to keep people out and terrorize those who were already in the United States.

He has now pushed refugee admissions to record lows, effectively ended asylum at the southern border, and moved to end protections for hundreds of thousands of people who have been in the country for decades. “It’s just that this is all I care about,” Miller once told colleagues about immigration, the New Yorker reported in February. “I don’t have a family. I don’t have anything else. This is my life.” Since then, Miller has used the coronavirus pandemic as a justification to indefinitely suspend nearly all immigration.

Back in third grade, Miller’s teacher said he kept to himself. She remembered that he was particularly dirty, ate dried glue off himself, and was reminiscent of the Peanuts character Pig-Pen. A classmate said Miller would put tape down the middle of the desk they shared. Miller’s side was a disaster, but he was adamant that his desk mate not cross the boundary line.

Miller’s time in the White House has looked similar during the pandemic—a quest to block people from a place that’s become a shambles.