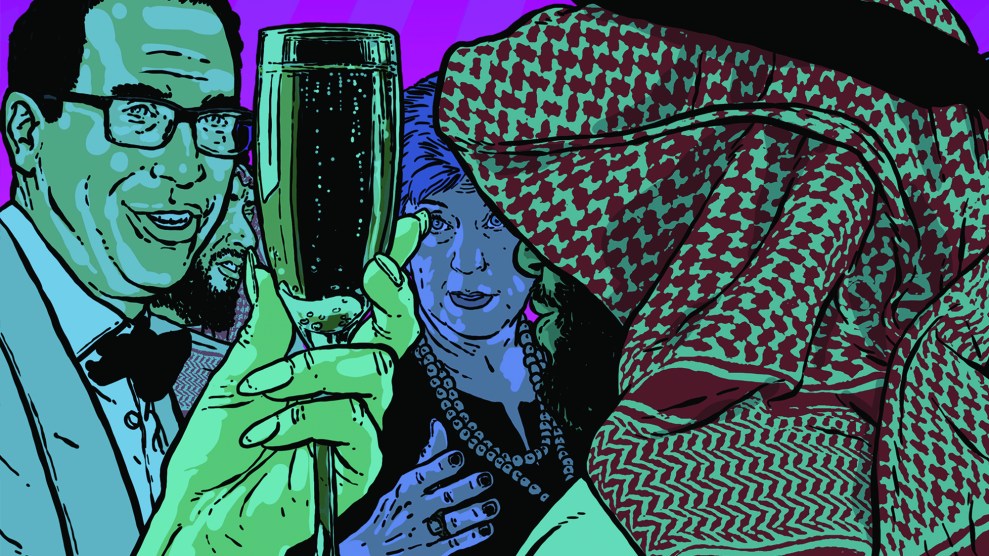 The Trump hotel has been called a “waiting room to the White House,” likened to the Mos Eisley cantina from Star Wars, and described as a “breeding ground” for Republican powerbrokers and wannabes. During the (largely online) Republican National Convention this week, the hotel’s role as a GOP social hub was on full display as it served as an auxiliary convention site, playing host to a familiar retinue of Trumpworld figures, including Rudy Giuliani, Donald Trump Jr., Eric Bolling, and many others. What follows is a guide to the collection of lobbyists, superfans, and cronies who have frequented the hotel over the years, shoveling money into the president’s pockets.

In April 2018, the day after his company announced it was merging with Sprint, T-Mobile ceo John Legere was spotted schmoozing in the hotel’s lobby. T-Mobile spent $195,000 at the hotel as their deal was reviewed by federal regulators. Legere was seen chatting with former Trump campaign manager and T-Mobile adviser Corey Lewandowski there on the day the ceo testified before Congress about the merger. Surprise: The deal was approved. Other companies, trade groups, and special interests that have booked the hotel: Unilever, the National Mining Association, the Mississippi Farm Bureau Federation, and the Border Patrol Foundation.

The day after his company announced a merger with Sprint that federal regulators are sure to review, T-Mobile's CEO John Legere was at the Trump Hotel DC. https://t.co/dyfGLgkklt pic.twitter.com/FJtbH4ZU7Y

Nearly two-thirds of Republican senators have been seen at the hotel or reported spending campaign funds there. (Look—there’s Sen. Ted Cruz by the Christmas tree!) Members of Congress have patronized the hotel at least 253 times, according to Citizens for Responsibility and Ethics in Washington. Those visitors include four of the six Republicans on a House subcommittee with oversight of the hotel’s lease, including Rep. Greg Pence (R-Ind.), the veep’s brother (whose campaign spent $45,000 at the hotel). Democratic lawmakers have largely steered clear of the hotel, with Sen. Joe Manchin (D-W.Va.) a notable exception.

Republican and conservative groups have paid financial tribute to Trump by holding fundraisers, conferences, and other events at the hotel. Among them: Vice President Mike Pence’s Great America Committee, which has dropped $237,000 there; the Republican National Committee ($640,000), the rnc’s Trump Victory committee ($250,000), and the Trump campaign itself ($178,000). Combined with the pro-Trump America First Action and Minority Leader Kevin McCarthy’s (R-Calif.) fundraising apparatuses, those groups have funneled $2 million-­plus into the hotel. Virginia Women for Trump holds annual Tea for Trump birthday parties at the hotel (“hats mandatory”). Its 2018 confab featured a runway show scored in part to the North Korean national anthem.

Family dinner. 🍽 Tag a friend who should be sitting at the table with us. 🇺🇸🇺🇸🇺🇸

On any given day before the pandemic, there was a fair chance of bumping into Trump’s personal lawyer Rudy Giuliani at the hotel’s bar or steakhouse, blt Prime. He’d even display a plaque at his usual table: “Rudolph W. Giuliani, Private Office.” You might have seen him smoking a cigar in a wine-stained tux after Steven Mnuchin’s wedding or dining with members of Trump’s legal defense team. But Giuliani did his real dirty work at what his indicted associate Lev Parnas called “our blt office on the second floor.” And Parnas and alleged co-conspirator Igor Fruman dined with Giuliani at the Trump Hotel just hours before they were arrested at Dulles Airport with one-way tickets to Vienna.

Even an All Star legal team has to eat. pic.twitter.com/DmcRfU2hHK

As the center of the maga social scene, the hotel is a frequent party venue for Trump sycophants and surrogates. Diamond and Silk premiered their film Dummycrats there and once held a benefit for their long-dormant nonprofit Stepping Into Self Truth Awareness and Success (sistas). During better days, Trump’s former personal lawyer Michael Cohen posed with the duo by the hotel’s Christmas tree after joining them for coffee and cookies. Sean Spicer celebrated the release of his book at the hotel, as did Turning Point usa’s Charlie Kirk. (Ivanka Trump, Jared Kushner, and Rep. Matt Gaetz were among his guests.) Sarah Huckabee Sanders held her goodbye party in the Franklin Study. At least six administration members have gotten married at the hotel, including Omarosa and Stephen Miller (not to each other). But it hasn’t been all good times. Singer Joy Villa, who attended the Grammys in a sequined maga gown, accused Lewandowski of assault after he allegedly slapped her on the butt during a 2017 party at the hotel (Lewandowski maintained his innocence and the district attorney declined to prosecute). And Cameron Dorsey, a onetime Trump appointee at the Commerce Department, alleges her chin was gashed by a piece of glass from a sabered champagne bottle. She’s suing the hotel.

Ten days after Trump’s election, an Asian diplomat told the Washington Post, “Why wouldn’t I stay at his hotel blocks from the White House, so I can tell the new president, ‘I love your new hotel!’” Many foreign officials, embassies, and other overseas interests similarly wagered that the best way into Trump’s good graces was through his wallet. Weeks before Trump took office, the embassy of Azerbaijan hosted a Hanukkah party in the Lincoln Library. The Kuwaiti Embassy held parties there for three years. The governments of Bahrain and the Philippines also booked events. Also spotted: Brexit Party leader Nigel Farage; Brazilian President Jair Bolsonaro’s son; Ukrainian politician and businessman Vitaliy Khomutynnik (who drew scrutiny from Robert Mueller); Ontario’s premier; Nigeria’s main opposition candidate; Ecuador’s trade minister; and Pakistan’s federal minister for maritime affairs.

Richard Grenell will be an amazing Ambassador to Germany. Congratulations! 🎊 #MAGA 🇺🇸

Trumpiness is next to godliness—at least as far as a number of evangelical groups and Christian right mainstays are concerned. The hotel has played host to various multiday religious gatherings, including Revolution 2018: Commissioned by Fire; The Turnaround: An Appeal to Heaven National Gathering; and the Family Research Council’s 2019 Christian Heritage Tour and Summit. In 2017, the Museum of the Bible held its $2,500-per-person opening gala at the hotel; Education Secretary Betsy DeVos and Jerry Falwell Jr. were guests. In 2020, Trump addressed a gathering of evangelicals, including megachurch pastor turned White House staffer Paula White. The audience laid hands on Trump during a prayer, and the president spoke to them from behind a Trump Hotel lectern.

[Related: Stay to Play: Inside the Sordid History of Trump’s DC Hotel]

Meeting with my national security team in #WashingtonDC. #Trump2016