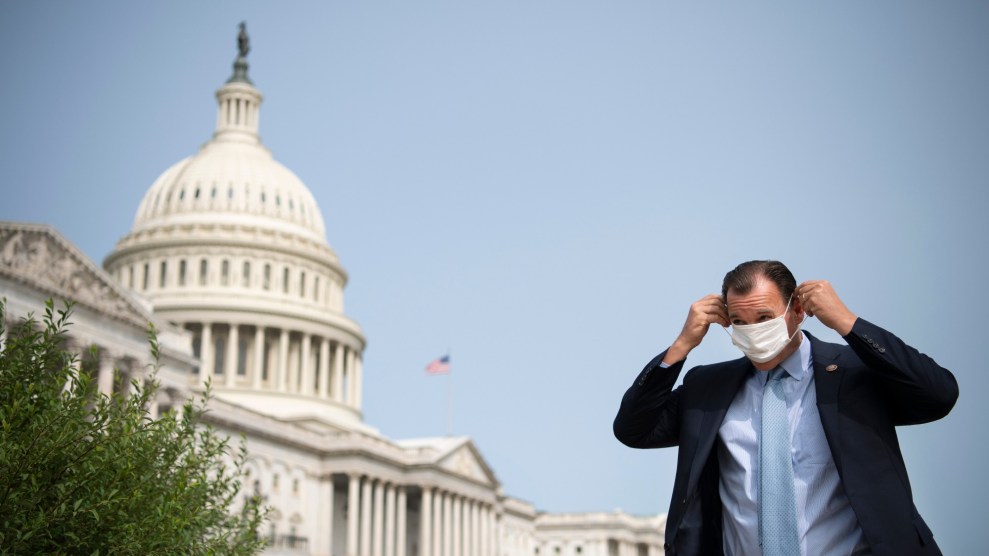 A bipartisan coalition of 50 House representatives unveiled a new coronavirus relief proposal on Tuesday, in hopes of restarting pandemic relief negotiations and passing an aid package in the weeks ahead of the November election. The plan splits the difference between the meager Senate GOP bill and the more expansive House Democratic one, but it’s unlikely to please either side or stand a real chance of passage.

“What brings us together—25 Democrats and 25 Republicans—is our shared goal of finding a pragmatic solution—a bipartisan path forward—to help get negotiators to return to the table,” tweeted Rep. Josh Gottheimer (D-N.J.) on Tuesday.

The proposal, spearheaded by Gottheimer and Rep. Tom Reed (R-N.Y.), follows weeks of deadlock between Republicans and Democrats in the Senate about how much relief to give to the American people, and in what form. Last Thursday, Senate Republicans forged ahead with a vote on a slimmed-down aid bill but came up short of the 60 Senate votes needed for passage. The legislation, which had a price tag of about $650 billion, included a $300-per-week boost to unemployment insurance but did not include a second round of $1,200 stimulus checks, nutrition assistance, financial help for renters, or aid to state and local governments whose budgets have been battered by economic shutdowns. Democrats had previously pushed for a $2.2 trillion aid package, after scaling back a $3 trillion bill the House passed in May, which included these elements and a continuation of the $600 weekly unemployment boost that expired at the end of July. Every Democrat—and one Republican—voted against the “skinny” relief bill last week, raising concerns that the two parties would not come to an agreement ahead of November.

Tuesday’s proposal from the Problem Solvers Caucus attempts a compromise between these two visions. Among other things, it proposes $500 billion in aid to state and local governments and a $450-per-week unemployment boost for eight weeks, followed by up to $600 per week through January 2021. The plan also proposes another round of $1,200 stimulus checks, as well as $25 billion in rental assistance and an additional $10 billion for food stamps through next July.

As it stands, the Problem Solvers’ package would cost about $1.5 trillion. But the proposal would only stay within the bounds of that Goldilocks price tag if the pandemic doesn’t intensify, because it includes a number of automatic triggers for additional aid if the pandemic worsens this winter and spring that could bring the total cost closer to $2 trillion—far more than most Republicans are willing to spend.

The proposal’s prospects could also be hurt by both parties’ political incentives to maintain the stalemate. Republicans have blamed the ongoing lack of aid on Democrats’ unwillingness to compromise. Democrats, on the other hand, have sought to put responsibility on the GOP, arguing that the scale of current need is enormous enough that settling for a far reduced aid package is untenable. House Speaker Nancy Pelosi called last week’s GOP proposal “a missed opportunity to do what is right for the American people.” For the Problem Solvers Caucus—many of whose members are up for reelection this November in tight races—their new compromise proposal also presents an opportunity to show voters in their home districts that they, too, tried to find a solution, even if it goes nowhere.