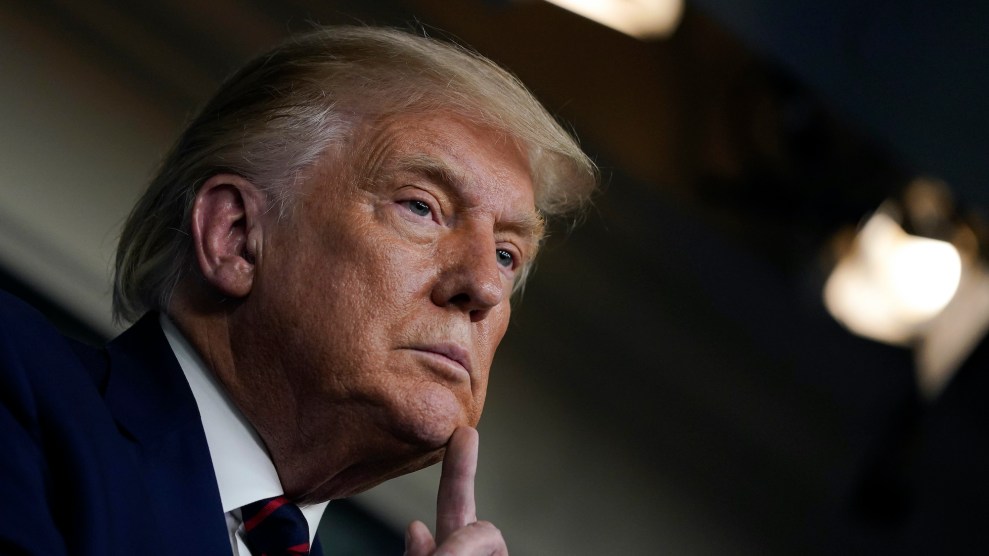 Yesterday, in what the New York Times dubbed a “highly unusual legal move,” the Department of Justice moved to take over the defense of President Donald Trump in the defamation lawsuit filed against him by E. Jean Carroll, a writer and advice columnist, who alleges Trump raped her in a Bergdorf Goodman dressing room in the mid-1990s.

Carroll sued Trump for defamation in New York state court last November, months after New York Magazine first published a story containing her allegations. Her lawsuit claims that the president defamed her when, in the hours and days after the story was published that June, Trump denied it at least three times, saying that her story was fabricated, that he had never met Carroll (despite a 1987 photograph showing them together at a party), and that he would not have assaulted Carroll because she was “not [his] type.” “The rape of a woman is a violent crime; compounding that crime with acts of malicious libel is abhorrent,” her lawsuit states.

“The legal question is whether his remarks occurred within the scope of his employment as president of the United States. I think there will be some legal analysis, and perhaps disagreement, about that view.”

Earlier this summer, Trump tried and failed to have the lawsuit put on hold, arguing that under the Constitution, a sitting president was immune from civil lawsuits in state court. A judge rejected that theory last month; then yesterday, on the last day for Trump to appeal that ruling, the Department of Justice moved to get involved, theorizing that because Trump was acting as a government employee when he denied Carroll’s claims, the “United States” is the proper defendant. If a federal judge permits the move, it would allow government lawyers, paid with taxpayer money, to defend the president—and would likely result in Carroll’s case being dismissed.

I chatted with Barbara McQuade, a law professor at the University of Michigan and former US Attorney for the Eastern District of Michigan, to break down what the remarkable motion could mean for Carroll’s quest to hold Trump accountable. Our conversation has been condensed and edited for length and clarity.

Yesterday, the Department of Justice filed a motion to move the case to federal court and substitute the United States in as a defendant for Donald Trump in E. Jean Carroll’s lawsuit. What does that mean?

This is a fairly routine thing that the government does from time to time: Somebody who is a government employee gets sued and they take it to the boss and say, “Look, I got sued for this. What do we do?” The boss takes it, it works its way to DOJ, and DOJ says, “We got this. We’ll take care of it.”

The Department of Justice routinely will [send] a case from state to federal court, and substitute the United States for the individual defendant, if the tort allegedly occurred within the scope of the [person’s] employment. A typical case might be a mail carrier who’s involved in a car accident with a postal truck. It was within the scope of her duties, and so the United States will substitute itself for the defendant, and will defend that case [with] Department of Justice lawyers instead of private attorneys. Taxpayers will pay the legal defense bills. If the plaintiff should prevail and there is some sort of money judgment, it’s the taxpayers who would pay those damages.

“Whether you’re acting in your personal or official capacity, when it comes to the president, can be a little more gray. The presidency is kind of a 24/7 job.”

That is what DOJ has endeavored to do with Donald Trump. The question, the legal question, is whether his remarks occurred within the scope of his employment as president of the United States. I think there will be some legal analysis, and perhaps disagreement, about that view.

Is there a general understanding of what it means to be acting within the scope of one’s office?

During your job shift would be one thing. For a letter carrier, if they’re driving their mail truck after they’ve punched in for the morning, that’s a pretty easy case to say they’re within the scope of their duties. If the postal employee was driving his personal vehicle on the weekend and was involved in a car accident, I think we could quite clearly say he was not acting within the scope of his employment at the time. But whether you’re acting in your personal or official capacity, when it comes to the president, can be a little more gray. The presidency is kind of a 24/7 job. So it’s difficult to say you were off duty when this occurred.

So if you’re a politician, and you use an official press conference to say that a woman accusing you of rape is “not your type,” the DOJ is saying that that sort of blatant misogyny is within the scope of your office? Is that really the argument being made here?

I don’t think they look at the content of the statement. That issue will be litigated. The question is, when he uttered the words—regardless what those words are—did he do so in the scope of his employment?

I see three separate statements that Jean Carroll alleges were defamatory. Two of them occurred in response to questions by members of the press. I think one could argue that those are within the scope of his employment, because it is part of his duties to be a spokesperson for the White House. If he’s asked questions, question one is about China, question two is about the coronavirus, and question three is about these allegations, and he denies them, I think one could argue that occurred within the scope of his employment. But I think the one that will fail to survive scrutiny is [when] he issued a written statement denying the allegations and saying it was fabricated. I don’t think one could make a reasonable argument that that was issued in the scope of his official duties.

So the law looks not at what he said, at least at this point in the case, but at the context the statement was made in.

“Even if he ultimately loses this argument about scope of employment, by delaying, he has probably won what he really wants to win, which is keeping this languishing past the election.”

If this motion succeeds—if the federal judge decides, yes, this is within the scope of Trump’s employment and the United States is the proper defendant—you have said that the case will likely be dismissed. Can you explain why?

There’s a concept called sovereign immunity, which says the government cannot be sued unless Congress has created an exception to that [with] legislation. There are some circumstances where Congress says, “It is ok to sue the United States.” One of those things is for negligence—so in the case of the postal worker involved in an accident, that suit could proceed. But the United States has not consented to be sued for defamation. So if the DOJ is successful in substituting in the United States for Donald Trump, then its next step will very likely be a motion to dismiss for sovereign immunity. I think if they get that far, that argument is likely to win. That would result in dismissal of the entire case.

That’s the whole game, then.

Yep. It all comes down to scope of employment.

I’m definitely not an expert, but this argument seems…bonkers. How normal is this?

Very common in routine cases. Involving the president? I’ve never heard of one.

Carroll reacted to the filing yesterday by writing on Twitter that Trump has sicced the DOJ on her just at the moment he was required to produce documents, DNA, and discovery. What’s the significance of the timing here?

It’s odd that this case has been litigated, and lots of activity has occurred in the state court, and only now, 10 months later, has DOJ said, “Oh, wait, this case belongs in federal court and United States is the real party here.” It seems to me that they were playing a strategic game: “Let’s see if we can win in state court first, and drag this out for a while.”

The next step would be discovery, things like turning over DNA samples, sitting for a deposition, and turning over documents. No doubt those are things that President Trump would like to avoid leading up to an election. Even if he ultimately loses this argument about scope of employment, by delaying, he has probably won what he really wants to win, which is keeping this languishing past the election.

How much further past the election could this development push things?

First, this [federal] court has to make a decision, which may occur sometime in the next month or so. If [it denies the motion and] Trump’s lawyers appeal that decision, it could take a year to get that decision back. He could then appeal that to the Supreme Court, which could take another year. So now we’re in, you know, 2022 or somewhere like that, before the case actually gets remanded back to court. Then it’s back to square one. So I think he could delay it by a couple of years if he wants to.

“Very common in routine cases. Involving the president? I’ve never heard of one.”

What does this all mean for Carroll’s attempts to get a DNA sample from Trump?

It certainly delays things. Ultimately, she may get the sample that she demands, but I think not for a while.

There are lots of creative ways of using DNA in legal cases that have been invented in the last few years—I’m thinking about genetic genealogy, the technique used to identify the Golden State Killer through DNA from his distant relatives. Does anything preclude, say, Mary Trump [Trump’s niece who recently wrote a damning book about her uncle] from spitting in a tube and giving it to Roberta Kaplan, Carroll’s lawyer?

She could do it voluntarily. That’s a really interesting theory. I don’t think there’s anything that would preclude her because she has control of her own DNA, even if it might match.

What would happen if Carroll was able to prove that there was a DNA match to Trump while the case was being stalled in this way?