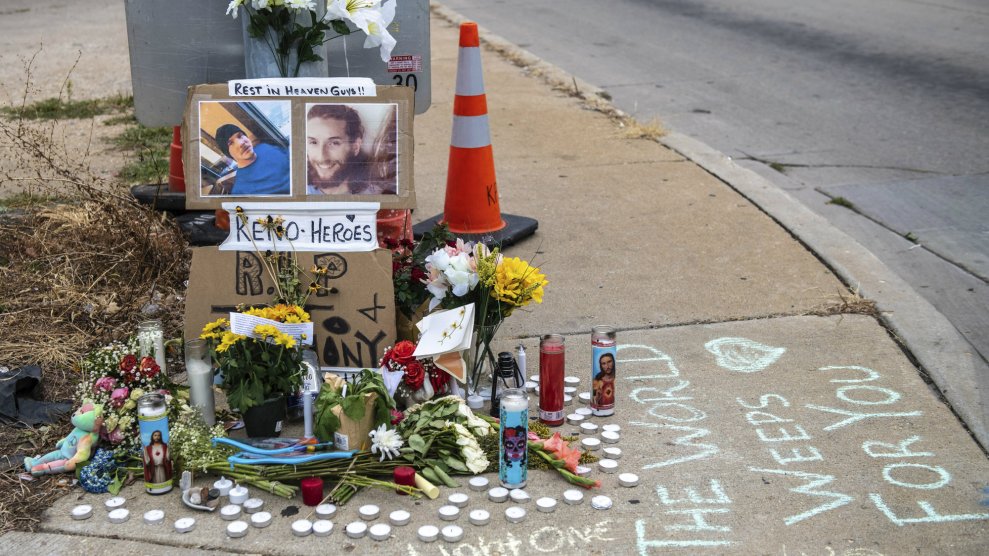 This spring, photos and videos of mostly white so-called lockdown protesters in Michigan acting anything but peaceful went viral. They demanded that state lawmakers end the public health restrictions designed to curb the spread of COVID-19. Though they were armed and taunting police officers, law enforcement officials did not respond violently.

Late last month, a similar scene played out in Boise, Idaho. Armed and unmasked protesters stormed the statehouse in order to get into a coronavirus hearing. Even though they were carrying weapons and shattered a glass door while protesting, law enforcement officials declined to intervene or arrest any of them. Fearing for her own safety, a Democratic lawmaker left the hearing, but state troopers told local media that they didn’t attempt to arrest any of the protesters because they feared doing so would escalate violence.

A few days later, Kyle Rittenhouse, a 17-year-old Donald Trump supporter went to Kenosha, Wisconsin, with a gun. He shot three racial justice protesters, killing two. Despite the heavy police presence at the scene, Rittenhouse crossed state lines and returned to his home in Illinois. He was not arrested until the following day.

Let’s be clear: When violent white people are going unchecked by police, the end result will hurt us all.

Harming Black and Brown people and liberals is central to the Trump presidency, and their hard line approach is considered to be an excellent reelection strategy. But there’s a link between his response to the coronavirus pandemic and to the racial justice protests: Both have been guided by his unquestioning belief in the superiority of whiteness, leading to devastating results for diverse communities. His white supporters shouldn’t believe that they can somehow insulate themselves from mounting violence and an unchecked deadly epidemic. White supremacy is deadly for everyone—even white people.

The United States has a long history of turning a blind eye to violent white ideology while focusing on scapegoating other communities like Muslims, immigrants, and now Antifa. Despite years of warnings about white supremacist violence from its own intelligence, government officials seem hellbent amplifying warnings about anti-fascists, even as violence among white nationalists and other far-right groups escalates. The Trump administration seems to accept violence perpetrated by white extremists—not considering it violence at all, but a form of patriotism—and has blamed any bloodshed on their opponents.

In a recent interview, Attorney General William Barr lied and said systemic racism was not a problem in this country. He insisted that the notion that Black people are disproportionately killed by police is a false narrative. Not that he was trying to change anyone’s mind. His objective seems to have been to delegitimize the ongoing Black Lives Matter protests. It is not a big leap from his comments to giving Trump supporters a free pass to harass, intimidate, and even kill protesters. After all, they’re not really protesters at all—just violent thugs who are out to inflict violence on law enforcement and nice suburban families. Comments like Barr’s are an eloquent bat signal to people like Rep. Clay Higgins (R-La.), who threatened to shoot Black protesters, and to cops themselves. Not to mention freelancers like Rittenhouse who now faces murder charges.

But encouraging violence has a high cost. In May, two officers protecting a courthouse were shot and one killed in Oakland, California, while a Black Lives Matter protest occurred a few blocks away. After law enforcement official caught the suspect, it turns out he was a far-right extremist trying to foment a race war by using the protests as cover. A similar incident occurred in Albuquerque, New Mexico, when a militia group showed up to a protest with weapons. And yet, the right-wing universe is singularly focused on Antifa, even going as so far to spread conspiracy theories about a plane full of thugs coming to harm Republicans and their supporters. Sir, the call is coming from inside the house.

Sir, the call is coming from inside the house.

But let’s not disconnect escalating violence at protests from the coronavirus, which has infected more than 6 million people and killed approximately 187,000 people in the United States since it began spreading widely earlier this year. The Trump administration refused to take it seriously, downplayed its severity, and then demanded states lift public health restrictions early. About the only concrete action Trump took to fight the pandemic was to ban planes from China—which did not accomplish much—where the virus first emerged. Throughout the overwhelming public health crisis, the president has continued to use China as the scapegoat, referring to COVID-19 with xenophobic terms like “China virus” and the “Kung flu.” While spending his time demonizing China he could conveniently ignore the devastating toll it was having in his own country.

The virus has disproportionately affected communities of color, which may explain the diminished sense of urgency from Trump and other Republican officials. If it only impacted the kind of people who wouldn’t vote for Trump anyway, who cares? His supporters were protesting restrictions, going viral on social media for refusing to wear masks at their grocery stores, and—taking their cues from the president—denying its severity. Yes, Herman Cain, one of his most ardent Black supporters, died from it. Illustrating with tragic clarity that just because people of color are disproportionately getting sick, doesn’t mean that white people or Trump supporters are immune.

Last month, 400,000 people gathered in Sturgis, South Dakota for a 10-day motorcycle rally. Many rally-goers were a good representative of Trump’s base: older, white, and plenty of red Make America Great Again hats dotted the crowd. Attendees eschewed masks and social distancing and gathered in bars, tattoo parlors, and other businesses, largely without masks. So far, 260 cases in 11 states have been linked to the rally and one man in Minnesota is dead.

At the Democratic National Convention one speaker blamed her father’s COVID death on Trump. Kristin Urquiza said her dad Mark Urquiza believed Trump when he insisted that the virus would go away. “One of the last things that my father said to me was that he felt betrayed by the likes of the president,” Urquiza said in a video. “His only preexisting condition was trusting Donald Trump.”

While Trump and his allies are happy to frame the protests as an unjust war on cops, his own inaction on the coronavirus is killing more police officers than anyone else. According to Officer Down Memorial Page and the National Law Enforcement Officers Memorial Fund, two non-profits that track law enforcement deaths, 100 police officers have been killed by COVID-19 this year. That’s more than all other causes like gun violence and car accidents combined. While Trump and his allies make wild claims that Antifa or protesters or looters are out to murder police officers, it’s really his own incompetence.

Donald Trump is staking his re-election campaign on inciting violence while ignoring the very real devastation the coronavirus pandemic has caused. But it’s to his own detriment. The virus, much like bullets, doesn’t care about your little red hat.